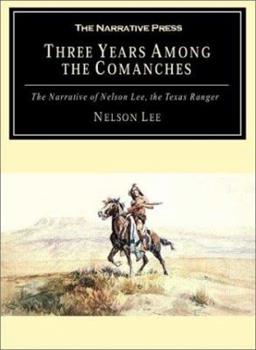 Three Years Among the Comanches: The Narrative of Nelson Lee, the Texas Ranger; Containing a Detailed Account of His Captivity Among the Indians, His

"Half a dozen Indians sprung upon me, some holding down my arms, others my legs, another astride my body with his hand upon my throat." Only Nelson Lee and three of his cowboy companions survived the... This description may be from another edition of this product.

three years among the comanches

Published by Thriftbooks.com User , 13 years ago
It was fun reading about a relative.Nelson Lee was my great,great grandfathers brother. It was exciting and sometimes scary to put myself in Nelson Lee's place. I got a good feel how life must have been during that period. I doubt I could have done as well, if the story is accurate. WORTH READING. Nolen Lee

Could I do this? 3 years of capitivity

Published by Thriftbooks.com User , 14 years ago
I am an avid reader of true Indian/pioneer books. This was new to me in format because only the first story I had read written by an adult captive and a male. Most of the books seem to be about young children or perhaps a young woman. The treatment and thoughts of an adult male were interesting. I kept wondering if I could have gone thru the ordeal. A quick read and makes you appreciate today! If you like history you will enjoy this true story.

First Hand Account of the West and its dangers

Published by Thriftbooks.com User , 16 years ago
Nelson Lee's straightforward account of his life as a Texas Ranger and then an Indian captive is enthralling. He also offers a valid critique of how the US govt was misguided in their approach to the Indian problem. Moreover, he pleads for the govt. to do something about those still in captivity. Fewer people might have gone West had they known what was really going on and the dangers ahead. This first-hand account is highly recommended.

Blows Politically Correct Dogma right out of the water!

Published by Thriftbooks.com User , 16 years ago
This book as well as Comanches (Pimlico Wild West), The Kiowas (Civilization of the American Indian Series), Nine Years Among the Indians, 1870-1879: The Story of the Captivity and Life of a Texan Among the Indians, and Life Among the Apaches (Classics of Old West) form the perfect antidote to the politically correct drivel out there that certain people relentlessly try to pass off as accurate accounts of Frontier History. Don't be misled by the back cover. I can't imagine who at the publisher ok'd that content, but once you read the book you'll find that the narrator did not "take a Comanche for a bride" out of any fond affection. Rather, it was due to pressing necessity. This is a wonderful book through and through. It shows the Comanche Indian prior to reservation life as just what he was and no less.As an example; take the Comanche habit of cutting a slit between the lower jaw of infants that their captives had when the Comanches felt that the infant was crying too much. After the slit was cut, the baby was hung alive on a broken tree branch, which would pierce through the slit and stick into the mouth under the tongue. Then the baby was left to die - hanging on the tree suspended from the broken branch.....all great sport and entertainment for the Comanches, as you'll find out when you read this startling and epic account of captivity and escape/evasion from Indian captors by a true Frontiersman and survivor. Equally, it should be noted that the Comanche dealt with any crying infant with female prisoners in this manner - and most prisoners of the Comanche were other Indians. Whites only began being abducted, abused, raped, worked to the bone, and then tortured to death by the Comanche during the later part of the frontier period. Before that, it was other Indians who were subjected to Comanche outrages - especially Apache, Navaho, Osage, and Tonkawa Indians. GET THIS BOOK AND GET THE OTHER TITLES I RECOMMEND HERE. They're also available right here at [...]. You'll get a real, honest-to-goodness EYE OPENING about life on the early western frontier minus the revolting Politically Correct, sanitized dogma that passes for "Fact" today.

So you think life is difficult?!?!?

Published by Thriftbooks.com User , 19 years ago
I have been reading books of late about the Texas Rangers. They are varied. This one is remarkable. Half the book is about his adventures as a Ranger. The second half is about being captured and living with the Comanches. It is an amazing story. Not great literature and bit dated in its prose, but I thought a wonderful read.
Trustpilot
Copyright © 2022 Thriftbooks.com Terms of Use | Privacy Policy | Do Not Sell or Share My Personal Information | Accessibility Statement
ThriftBooks® and the ThriftBooks® logo are registered trademarks of Thrift Books Global, LLC