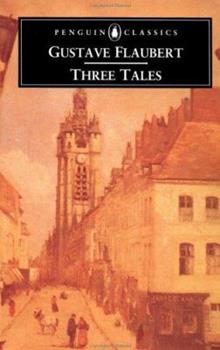 This volume includes A Simple Heart, The legend of St Julian Hospitator and Herodias. These three pieces of fiction by the 19th-century French naturalist are introduced by an essay describing his life, works, and artistic abilities.

Published by Thriftbooks.com User , 14 years ago
The Oil Jar and Other Stories (Dover Thrift Editions) This book of short novels ( not quite short stories, not quite novels) is very representative of the time it was written. One can't see the wild west in this cultured writing, but that is the time period for America! Five plays by Oscar Wilde The last one reminds me of the Oscar Wilde play with extremes of descriptive detail that would make the archaeologists angry today. The contrast of realism and religious images in Flaubert makes him interesting as well as being a prose master.

An Introduction to Flaubert

Published by Thriftbooks.com User , 16 years ago
Three tales: One "modern" short-story, one medieval legend, and one historical sketch. Three diverse tales, all colorful and engaging. Reading these tales makes one wish Flaubert had written more. Other reviewers have described each story in more detail so I'll keep my descriptions brief. Beginning with "A Simple Heart", the story of a lonely servant-girl named Felicite who devotes her life to helping a single mother raise her children in a small Normandy village; moving back in time to the medieval era and a capitvating re-telling the legend of "St. Julian Hospitator" who devotes himself to God after being haunted by the thousands of animals he'd hunted and killed as a brash, arrogant youth; far back to the time of Christ, when "Herodias", King Herod's head-strong wife, instigates the beheading of John the Baptist, unintentionally paving the way for Jesus Christ himself; Flaubert has created three "religious" tales that plainly and simply illustrate the status of Christianity at different times, in different places. Some readers of Flaubert find undertones of sarcasm in these tales (more prevelant in "Sentimental Education" for sure), but I really believe he's attempting to be as non-judgmental as possible, simply telling it the way it is; or was. It seems to me that Flaubert's intention with these stories (especially "A Simple Heart" which to me has the most character depth & uniqueness of the three) is to not only showcase his literary skills, but to challenge himself to write about three seemingly unconnected eras and linking them by a common thread. Flaubert's descriptions and details are always of the highest caliber (although sometimes tiresome if one's not used to his style) but ultimately, each tale stands on its own, making "Three Tales" an excellent introduction to one of the most influential, and talented writers of all time.

The progression of Christianity -or maybe not-.

Published by Thriftbooks.com User , 17 years ago
Who knows what was going through the mind of this most enigmatic of modern writers, Monsieur Flaubert, when he came up with these stories? Reviewers have speculated about the only common thread that could link these three extremely different tales: Christianity and what it has meant to the people in different historical times. Each tale is completely different in approach and style from the other two."A simple heart" is easily the best of the three, in fact a masterpiece of Flaubertism, that is, a subtly ironic and totally dispassionate and realistic account of some provincial character. Felicite is a "simple heart", a woman of miserable origins who spends her life in servitude, contemplating the years go by, each one identical to the next. Felicite has a simple faith in God, unquestioning, unphilosophic, the kind of faith every priest dreams about for his flock. The tale is perfectly written, utterly sad and desolate, but being written by Flaubert, there's a cold irony beneath. Some people think this tale represents Christianity as it came to be in Modern times (XIX century)."The Legend of St. Julian Hospitator" is a very strange tale of sin and redemption -the Medieval way. Julian is born rich, but he's a cruel man, fond of killing animals. He has no mercy in his heart. After a strange prophecy which he thinks has been fulfilled, Julian flees home and wanders around for many years, until he finds love. But he will sin again and ruin his life for his impiety. The end is a mystic and chilling one. Some people think this tale represents Christianity as lived by people in the Middle Ages."Herodias", is a cinematographic tale which tells the story of John the Baptist's beheading. It is picture after picture of action. The central character is Herod, puppet king of Judea. He's having a hard time watching his numerous enemies camped outside his palace, dealing with the Roman envoy, placating the Jewish priests and wondering what to do with the prisoner he has in a dungeon -John. Then everybody shows up and a party begins. There, his lover's daughter, Herodias, will ask for something from him. Some people think this is the social context of the beginnings of Christianity.Make your own conclusions: is Flaubert giving us a history lesson? Or savagely attacking Christianity and mocking it? Or simply depicting the different ways Christianity has been lived through the centuries? Or none of the above?

Published by Thriftbooks.com User , 21 years ago
Flaubert's stories are, with "Madame Bovary", his greatest creations. They show a style that was never before seen in French literature, a purity of expresion and depth of meaning, that will live forever.

Published by Thriftbooks.com User , 21 years ago
This book is actually translated by Robert Baldick, not Walter Cobb as indicated on the order form. The tales are perfectly Flaubertian.
Copyright © 2020 Thriftbooks.com Terms of Use | Privacy Policy | Do Not Sell My Personal Information | Accessibility Statement
ThriftBooks® and the ThriftBooks® logo are registered trademarks of Thrift Books Global, LLC