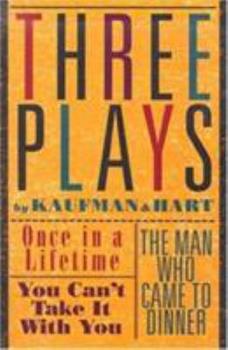 Three Plays by Kaufman and Hart: Once in a Lifetime, You Can't Take It with You and the Man Who Came to Dinner

Three American theater classics by two of our most revered playwrights. "Once in a Lifetime" is a highly charged satire about three small-time vaudevillians who set out for Hollywood. There, their wild luck, the incompetence of the producers, and the haywire atmosphere of the burgeoning film industry conspire to their great success. The 1936 Pulitzer Prize winner "You Can't Take It With You" is the tale of a zany but lovable family of hobby-horse...

Three Plays by Kaufman and hart

Published by Thriftbooks.com User , 12 years ago
As a fan of Kaufman and Hart for years, I was very happy to find a place where I could enjoy three of their plays in one book. I was extremely familiar with "You can't take It With You" since I appeared in the play in high school. I was also familiar with "The Man Who Came to Dinner." For some reason, I'd missed reading "Once In a Lifetime," and I found it equally enjoyable and full of the K & H wit. The inclusion of the two essays at the front of the compilation offered some fascinating insight into the personalities and working relationship of these two theatrical giants. Althogether, an enjoyable was to while away a couple of evenings.

Published by Thriftbooks.com User , 14 years ago
I love a great detective story, and this is one. But what separates this story from most novels is the emphasis Frei places on the CRIME VICTIMS. Four or five blonde women are found murdered in post-war Berlin. A spree-killer is on the loose. The novel centers on the German policeman (and his family) and an American policeman, stationed in the occupied city, who team up to find the killer. But, not neglected are the women who were murdered. All were "fleshed out". All the women had played a role, some large and some small, in anti-Nazi activities during the war. All were on the verge of life-changing events that were cut still by the murderer's chain. Along with the crime story is an often-humorous story of the German policeman's 15 year old son, playing the angles to try to buy a well-cut suit that will win him the heart - and body - of a hot-to-trot girl. (The tailor's daughter). As the author's note says that author Frei was born in 1930, I wonder if this part was "his" story. This is a very good book.

three plays by kaufman and hart

Published by Thriftbooks.com User , 15 years ago
The reviews on these plays have been in for 70 years, so I can just say that the edition was clear and well-presented.

Published by Thriftbooks.com User , 16 years ago
Kaufman & Hart are comedy gold, and are alive and well in this wonderful collection of their best collaborative efforts. Unlike the acting editions, this publication contains the plays in their original condition, no lines changed or stage managers' blocking cues, just the good stuff. Kaufman & Hart's comedies not only stand alone as the greatest American comedic plays, but also as universal works adaptable to a modern stage. They created characters, and wrote lines that showcase biting wit, physical comedy, and plenty of unforgettable one-liners--a mixture that has something for everyone, and everything for many. You don't have to agree with me that Kaufman & Hart were/are America's greatest comedic playwrights (not to mention their other areas of theatrical expertise), but you should definitely give them a chance to convince you themselves. On top of their writing, this collection is both compact and affordable. A great buy, and an excellent read.

Published by Thriftbooks.com User , 23 years ago
The play centers around the crazy Sycmore family, particularly focusing on the younger daughter, Alice. Alice is engaged to Tony Kirby, but feels the gap between his straight-laced roots and her outlandish upbringing will be to strong. In an effort to dissuede her, Tony surprises her by bringing his parents to visit on the wrong night so they get an acurate idea of Alice's family. The night ends with the whole company being arrested for the illegal manufacture of fireworks. Alice plans to leave for the Adirondacks, but is stopped by Tony. His father comes for him, but Mr. Kirby is brought around to the other side by Grandpa, who points out a very important fact. Whatever possessions you have in life are of no consequence. You can't take it with you when you die.
Trustpilot
Copyright © 2022 Thriftbooks.com Terms of Use | Privacy Policy | Do Not Sell My Personal Information | Accessibility Statement
ThriftBooks® and the ThriftBooks® logo are registered trademarks of Thrift Books Global, LLC