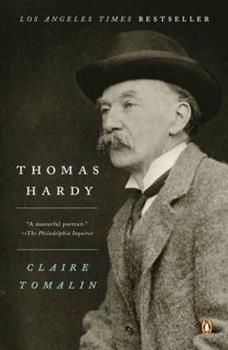 "A masterful portrait" ( The Philadelphia Inquirer ) from a Whitbread Award-winning biographer, and author of A Life of My Own . The novels of Thomas Hardy have a permanent place on every booklover's shelf, yet little is known about the interior life of the man who wrote them. A believer and an unbeliever, a socialist and a snob, an unhappy husband and a desolate widower, Hardy challenged the sexual and religious conventions of his time in his novels...

Published by Thriftbooks.com User , 11 years ago
Being very familiar with Hardy's novels and short stories, but not so familiar with his poetry, this biography was the perfect one for me because Tomalin leans heavily on Hardy's poetry output to mark significant milestones in his personal life. Her writing is emotional, intense and very readable. It did not bother me in the least that she speculates about people and events that may, or may not have influenced Hardy's writing. She is only definitive when she knows that she can be and her thoughtful analysis of life events that possibly enter into Hardy's novelistic world is extremely thought provoking. She does not flinch in describing Hardy's warts and character flaws and her exploration of his complex relationships with women is both thorough and astonishing. Highly recommended, especially for fans of Hardy's literature.

Published by Thriftbooks.com User , 13 years ago
Excellent price. I ordered one for a friend and had it sent to her as well as myself. We both got our books quickly, in perfect condition.

Published by Thriftbooks.com User , 14 years ago
As a Thomas Hardy fans, I was thrilled when I saw that Claire Tomalin had followed her l997 biography of Jane Austen with this book. I enjoyed Jane Austen: A Life and had positive expectations of the new book; these were more than fulfilled. I find this book even better than the first. Ms Tomalin writes well and is very thorough, making good use of sources available to her. I don't know if it was that she had more sources available to her this time, but her thoroughness seemed less nitpicky (she is never pedantic)is somewhow than it sometimes appeared in the earlier work. When she gives--parenthetically--the actual number of the first phone the Hardy's acquired, it is a sort of bonus rather than a filler. Hardy may have been a drab little man--as some contemporaries described him--but her description is not drab reading; it is compelling and enlightening, making one's joy in his work even greater than it already was. I am more familiar with his prose than with his poetry, and I particularly appreiated he use of his poems to illustrate aspects of his life and relationships. Ms Tomalin has done a truly lovely job of making me more familiar with my two favorite authors.

Published by Thriftbooks.com User , 14 years ago
Thomas Hardy has been my favorite author ever since I read "The Mayor of Casterbridge" as a sophomore in high school,'way back in 1962. Since that first book, I have read his novels avidly, and with great pleasure, as has my son. This new biography is simply amazing, for it recounts Hardy's full and active life, and even though it shows some of his warts, it gives us a picture of a man who used his life and struggles in his works. Mostly his poetry was generated from his experiences, but many of the characters and scenes of his novels came from his life in the country, and he even used certain buildings in his tales, changing the names, of course. We see here a human Hardy, flawed just as we all are, but striving mightily to give to the world his feelings and thoughts through his works. After reading this book, I appreciate Hardy even more!

Hardy: the novelist and the poet

Published by Thriftbooks.com User , 14 years ago
This new biography of Thomas Hardy by author Claire Tomalin is a deep and sensitive work about a man whose own works were hotly debated and whose personal life was often so coolly lived. Rich in detail with a wonderful narrative, Tomalin deftly remains at a distance from her subject letting the words of Hardy's books, and especially his poems, tell the story. At the end this reader wants to revisit many of Hardy's works but also to get to know his poems. After all, as Tomalin points out, Hardy considered himself more of a poet than a novelist. A rustic man with a complex nature, Thomas Hardy seemed to live sometimes at polar opposites. Hailing from Dorset, he nonetheless made London his second home and was comfortable in each. His collective output, often expressing much joy, was hardly a mirror of his own, sad life. The interest in Tomalin's book could not have been kept had she not included his peculiar first wife, Emma and his jealous second wife, Florence. Women ruled the roost in Hardy's life and the influence these two women had on Hardy was great. Tomalin captures all of the relationships firmly. It is a tribute to the author to get so close to Hardy without letting it becoming a hagiography (in the modern sense of the word). Added to that is the subtle humor displayed throughout. Two of the best comical observations were penned by persons who either knew or witnessed Hardy...the first being poet Arthur Benson's writing about a visit to Max Gate (the Hardy home in Dorchester) shortly before Emma's death in 1912. It's the best description of the Hardys in the book. The second account, just as humorous as the first, was written by George Bernard Shaw's wife Charlotte, who attended Hardy's second funeral at Westminster Abbey along with her husband, Rudyard Kipling, J.M. Barrie, Prime Minister Stanley Baldwin and many others. The farcical nature of the day is a savored ending to the book. Claire Tomalin is part historian, part author and part professor. In this Thomas Hardy biography she has done a great service in relating his life, writing with flair and detail. I highly recommend it.
Copyright © 2020 Thriftbooks.com Terms of Use | Privacy Policy | Do Not Sell My Personal Information | Accessibility Statement
ThriftBooks® and the ThriftBooks® logo are registered trademarks of Thrift Books Global, LLC