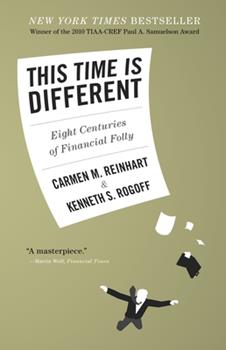 This Time Is Different: Eight Centuries of Financial Folly

A comprehensive look at international financial crises that puts more recent economic meltdowns into perspectiveThroughout history, rich and poor countries alike have been lending, borrowing, crashing--and recovering--their way through an extraordinary range of financial crises. Each time, the experts have chimed, this time is different--claiming that the old rules of valuation no longer apply and that the new situation bears little similarity to...

Analyzing the Commonalities in Causes and Consequences of Centuries of Financial Crises.

Published by Thriftbooks.com User , 12 years ago
"This Time Is Different" presents a quantitative history of financial crises -debt crises, bank crises, currency crises, inflation crises- with an eye to commonalities in the run-ups and aftermaths of these crises. Of course the authors' point is the reverse of the book's title: this time is never different. Economists Carmen M. Reinhart and Kenneth B. Rogoff demonstrate that financial crises have a lot in common, regardless of when and where they take place, by showing us the data. The obvious conclusion would be that financial crises are predictable. Although they state that "it is beyond the scope of this book to engage in a full-fledged analysis of early warning systems," the authors present much of the information that would be required to develop a predictive model. Whether it's predictive value is fool-proof or not, I was fascinated by the data and analyses. The authors have pulled together an unprecedented amount of data for various types of financial crises over a period of centuries. They found it particularly difficult to find reliable data on domestic debt, which they call "an exercise in archeology", but managed to uncover enough to claim that domestic debt is the vital piece of missing information in understanding debt intolerance. Reinhart and Rogoff use data on 66 countries that account for 90% of world GDP over nearly 8 centuries, with an emphasis on the past 2 centuries, for which they have the most data (and which had the most crises). "This Time Is Different" has 6 parts but it effectively has 3 topics: sovereign and domestic debt and default, banking crises with some forays into inflation and currency crises, and the current global financial crisis, otherwise known as the Second Great Contraction. Looking at the charts, it's clear that serial default is historically the norm. And, though advanced economies may outgrow patterns of default, they never outgrow banking crises, which are surprisingly similar in their causes and duration in advanced and emerging market economies. Up to this point, the authors generally use data from the past 2 centuries. It is only in the chapter on default through debasement that they include the past 8 centuries. The chapters dedicated to the US subprime crisis and Second Great Contraction draw on data since 1900 only. The authors attempt to develop benchmarks for gauging the severity and duration of a crisis based on data from past crises. This is the most opinionated section of the book, even though the authors' views are empirical. They present both sides of the argument for and against the housing boom and large US account deficits, but Reinhart and Rogoff conclude that rising asset prices, slowing productivity, large current account deficits, and sustained public and private debt build-ups create, if not a looming crisis, an accident waiting to happen. They admit, however, that it would have been difficult for policy makers to act in time even if they had seen it the current crisis coming

Published by Thriftbooks.com User , 13 years ago
When one reads the book, the first impression is the incredible amount of work the authors put into collecting the most comprehensive, as of today, dataset on financial crises and key economic variables for not only developed but also developing countries. This dataset will most definitely be at the heart of future empirical work on financial crises. It will discipline economists to strive to build more realistic models that are able to reproduce the systematic trends and fluctuations of economic variables around the period of financial crises. As the authors admit to be surprised themselves, not only such systematic relationships abound across time but also across developed and developing countries. The book is an important reminder that it is easy to live under the illusion that "this time is different" and that developed countries have outgrown severe financial crises. However, as the current financial crisis reminded us the more we lie to ourselves, the less vigilant we are as to potential worst case scenarios. Finally, speaking of vigilance, the book is not only a thorough description of the past but also hints at a very serious problem many countries including the US would most likely face in the future; namely, the issuance of unsustainable levels of government debt which could have tremendous negative medium and long run effects at a global level.

Explaining the Second Great Depresson and Its Potential Aftermath

Published by Thriftbooks.com User , 13 years ago
Be prepared for a very sobering and complete review of eight centuries of financial crises, complete with charts and graphs that even those who fell asleep in the Macro 101 in college should be able to understand. This book is worth reading in its entirety, but chapters 13 to 17, in which the authors draw important lessons from the 800 years of financial folly for the present course of the "Second Great Contraction of 2007" and its aftermath, make this volume well worth the price. Also, be prepared for some sobering analysis of the effectiveness of central banks and government policymakers in addressing economic crisis (yes, regrettably, still not very effective even with the benefit of 800 years of history and analysis to draw on). You will learn why This Time is Ultimately Not That Different in so many ways. Ken Rogoff worked at both the Fed and the IMF so he is in a unique position to evaluate the global scope of the 2nd Great Depression in modern history, and it is the very global nature of this event that leads him to conclude that the aftermath with be long-lasting and have profound effects on the global economy for many years to come. While documenting the fiscal policy response to the Second Great Contraction of 2007, including the massive global government bailouts in the banking sector, Rogoff points out that the size and long-term impact of these measures, while profound, may be dwarfed by the effects on the U.S. national deficit and national debt of reduced Federal tax revenues during the global downturn. With such high levels of debt and limited means to reduce government expenditures to compensate for sharp reductions in tax revenues, the ultimate effect may be a debasing of the U.S. dollar by the Fed, producing a period of increased inflation or stagflation. The earlier chapters describing periods of hyperinflation, bank and sovereign defaults throughout history are fascinating, leading up to the payoff in the final chapters, in which one can draw one's own conclusions about what course this most recent crisis will take and just as importantly, how policymakers are liable to miscalculate once again. The Federal money-printing presses around the world are in high gear once again, more automated and sophisticated than ancient regal sovereigns clipping coins and extracting gold and silver from the royal coinage to finance their realms. Proving once again that history doesn't always repeat itself, but it does rhyme.

Published by Thriftbooks.com User , 13 years ago
As Martin Wolf from Financial Times has written... "A MASTERPIECE" One of the most interesting things about this books is that it combines a very rigorous research on the topic while keeping it accessible to a large audience. The book is self-contained, with definitions provided along the way, which makes it easy for people with no previous knowledge in economics to enjoy and understand it. The authors also put together a database without precedents in the area which not only makes their statements much stronger, but also makes a great contribution to the field.

Prodigious and full of gallows humor

Published by Thriftbooks.com User , 13 years ago
Rogoff and Reinhart, two very substantive (and, I might add, earnest) economists, have produced a prodigious work which will be read and studied for years. They have gathered mountains of data from primary and secondary sources and reduced it to dozens of charts and graphs, a heroic work in its own right. Their intention, God bless 'em, is to lay out the follies that have led to economic/financial crises over the last eight centuries. Their findings: humans have not learned from past mistakes. The title is ironic and is worthy of Peter DeVries. The authors say it is "almost comical" that no governments reveal their true financial condition today, nor have they done so in the past. The lack of transparency and the shenanigans that go on behind the curtains contribute, of course, to the human suffering that ensues in crisis after crisis. One needs to find this book comical if one is not to slip into a permanent depression about the utter failure of national leaders to address shortcomings in national domestic and foreign economic policies in order to avoid systemic crises. No one has, from the 13th century onward, anywhere in the world. The authors persist in saying that they hope their monumental effort will lead to an examination by policymakers of past mistakes and help them avoid future mistakes. I say, "Good luck with that." In my opinion, this book ranks with the complete works of Shakespeare in illuminating the human condition. Or Bruegel, or Beethoven. It will not bring about change, but it will entertain in a deeply satisfying way.
Trustpilot
Copyright © 2022 Thriftbooks.com Terms of Use | Privacy Policy | Do Not Sell My Personal Information | Cookie Preferences | Accessibility Statement
ThriftBooks® and the ThriftBooks® logo are registered trademarks of Thrift Books Global, LLC