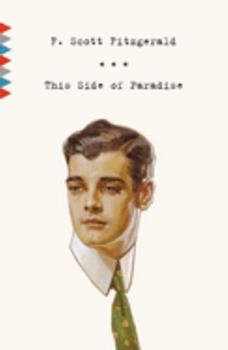 This Side of Paradise

F. Scott Fitzgerald's cherished debut novel announced the arrival of a brilliant young writer and anticipated his masterpiece, The Great Gatsby . Published in 1920, when the author was just twenty-three, This Side of Paradise recounts the education of young Amory Blaine--egoistic, versatile, callow, imaginative. As Amory makes his way among debutantes and Princeton undergraduates, we enter an environment heady with the promise of everything that was...

Published by acastillo , 1 year ago
It was alright. I have to say, it wasn't my favorite. I enjoyed the Great Gatsby better but I wouldn't say this was a terrible book. Although I didn't like the ending (I don't want to spoil anything). Most people have a lot to say when talking about this book but I just don't see anything special about. Although again that might be because of my opinion on the ending. Overall, It wasn't bad. Would I recommend it, sure, why not. I would like to read more opinions.

Published by Thriftbooks.com User , 19 years ago
After 80 years, what can be said about Fitzgerald's first novel that hasn't already been said? The first thing that struck me on reading this was the timelessness of its subject matter, no matter how dated the setting is. The Ivy League of Fitzgerald's indifferent hero, Amory Blaine, is a thing of the past, with only the faintest reminders of its aura of American royalty remaining today. Reading about Amory's days at Princeton is a bit like looking at the ancient photographs of 19th century football teams that every university seems to have on display in some corner of the campus, with the added twist that most of those long-ago jocks were presumably the sons of bankers and senators. And yet, Fitzgerald's depiction of a whirlwind of exhilaration, alienation, eagerness for the future and a sense that it should all be more meaningful is still all too recognizable to those of us who are just a few years out of college. So like all the best fiction, the story works both on a historical and a contemporary level.Amory isn't the most sympathetic of protagonists. Coming from a non-aristocratic but quite cushy background, he's all you would expect from a Fitzgerald hero: full of himself, indifferent to the less fortunate, somewhat lazy, and at once condescending to and inept with women. But this is a story of young adulthood in the last gasps of the pre-World War I upper-crust, and Amory is the perfect vehicle for illustrating the youth of that time and place. Although the relative lack of details provided about Amory's experience in the war is odd, it adds to his Everyman quality for the generations since his, all of which have had their own reasons for a bleak outlook at some point even if few could match the sheer trauma of 1917-18. The one real flaw in the story is an inconsistent, and often unconvincing, quality when it comes to how and why Amory falls for the several women he endures romantic misadventures with. For all the heartbreak he endures, the reader is often left wondering where his attraction stemmed from in the first place - an odd shortcoming considering how good Fitzgerald was at illustrating that issue in later works. But the romantic episodes that do work are vivid enough to forgive the weaker ones. Also, as usual, Fitzgerald's narrative style is somewhat purple; but he's so good at it that it usually doesn't strike the reader as a problem.Bleak as it may be, this is a great book for anyone who has survived young adulthood and remembers it honestly. Just try not to laugh or cringe next time somebody wants to talk about "the good old days."

Published by Thriftbooks.com User , 20 years ago
Many people consider The great Gatsby to be Fitzgerald's greatest work. In doing this they are shortchanging him from all his other novels, and his short stories (which are also gems of craftsmanship). This side of paradise is a work that I consider equal to the Catcher of the Rye by Salinger. It evokes a setting and a time, captured beautifully, that has been past and never to come again. However, we of the 2000s can still relate to the protagonist because what he goes through in college: the inadequacies, the romance, the questions, is something that we all feel, are torn by, and befuddled with. The work makes you laugh at it's antics mainly because we can place ourselves in those setting and making the same mistakes. The prose is so beautiful because Fitzgerald was a careful craftsman and left nothing to chance. This is a coming=of=age story every young person need to read, and every young-at-heart person, for that matter. So sit back with this book, and be ready to be taken to an era that will never be again, but will always live on in Amory Blaine (the protagonist) and everyone who has a little Amory in them.

The "Coming of Age" Novel Perfected, and then some...

Published by Thriftbooks.com User , 20 years ago
This is a brilliant work that many categorize in the "male coming of age" genre. It is correctly placed there and is on par with, if not better than, "Great Expectations." This novel shows the zest of a young writer already in greatness on his way to perfection. The radical structure of this novel shows the creativity and non-conformity that Fitzgerald set as the mode for the modern day contemporary novel. His incorporation of poetry, music, and, and then sudden shift to play-writing, in his prose, to get his point across are brilliant in his execution of "showing rather than telling."Amory (wordplay on amorous) is looking for truth and sense in his life. He seeks it in intellectual pursuits, riotous living, and love. Love is what makes him most vulnerable. His general liking for the arts rather than the sciences mirror the ambitions of so many young males, males who would be reading this novel. He can't dwell in what is known or scientifically documented, his heart lies in the arts and history: the former a place an outlet to seek truth and the latter a point of reference by which he categorizes himself. He believes love to be something tangible like the music he hears, the poetry he reads and writes, but love is chaos. He makes lists to categorize and make sense of elements of the social world around him, but life (especially in the shift from adolesence to young-adulthood) and people are so incongruent that none of it is able to be categorized. The use of the shift to play-writing is not used gratuitously. Amory believes that life and love fall into place once one is done with school and sets out for the world. He is acting/living out a love story in the real world, but nothing in life is structured like the story line to a dramatic romance. Fitzgerald's narrative is a lyrical, yet chaotic whirlwind, it perfectly coincides with the life of a person coming into adulthood during a time of drastic social change and the disillusionment from the atrocities of The Great War.The last quarter of the novel shows the roots of what would grow to Fitzgerald's literary perfection. Reading the ending to this book keeps the reader in a state of awe. There is a beautiful array of one-liners gracing the pages during Amory's conversation with the Goggled Man and his partner. Everyone I discuss this novel with has a favorite line or two from this section. The words that have been turning over in my mind ever since the first time I read this novel are:"'I'm restless. My whole generation is restless. I'm sick of a system where the richest man gets the most beautiful girl if he wants her, where the artist without an income has to sell his talents to a button manufacturer.'"The last line of the book is a lesson in itself. Fitzgerald entertains the reader from the soft and subtle beginning, to the chaotic yet, settling end: "I know myself," he cried, "but that is all." After all the people he had come in contact with during his journey for truth and love, and all

Published by Thriftbooks.com User , 22 years ago
When I first picked up "This Side of Paradise" I was moved at once to put it back down. A casual thumbing through the pages, though, held out the promise of a surprisingly witty author. (After all, good readers should approach with extreme caution that pantheon of flatulent phonies extolled by schoolmarms!) But, the "Bored of Education," aside, I allowed my interest to master my natural prejudice and read a few more lines. "Hm. Actually intelligent," I thought. "Sardonic!" Indeed! With overtones of Mencken's Nietzschean irony and Oscar Wilde's talent for pithy phrase-making, the young Fitzgerald produced a remarkable novel, by anyone's standards. One of the ten best of the 20th century, in my opinion--right up there with "Lolita," "Steppenwolf," and "The Tin Drum"! . . . . Certainly, readers of limited vocabularies (or else readers with ample vocabularies, but no playfulness) should not attempt this book. Its free-flowing structure is reminiscent of that used by Melville in "Moby Dick," which itself drew heavy criticism by people who wanted craftsman when they had before them Artists! So, for anyone to see in such virtuosical creativity the "follies of Youth" just because it refuses to conform to the old, boring and hackneyed formula of a linear novel, betrays a lack of understanding on the part of the blathering critic. "This Side of Paradise" is a great book--not because we were told it is; but (by some accident, some mistake, some blessing!) it really and truly is!
Copyright © 2020 Thriftbooks.com Terms of Use | Privacy Policy | Do Not Sell My Personal Information | Accessibility Statement
ThriftBooks® and the ThriftBooks® logo are registered trademarks of Thrift Books Global, LLC