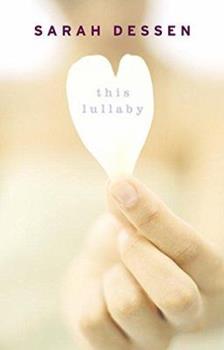 A "New York Times" bestseller She s got it all figured out. Or does she? When it comes to relationships, Remy s got a whole set of rules. Never get too serious. Never let him break your heart. And never, ever date a musician. But then Remy meets Dexter, and the rules don t seem to apply anymore. Could it be that she s starting to understand what all those love songs are about? Remy and Dexter jump off the pages into the hearts of readers, who will...

Published by yoo , 9 months ago
favorite sarah dessen book ever

Condition of book was lies.

Published by Melissa , 3 years ago
I ordered this book "like new" and the pages are ripped from the binding.
Published by Thriftbooks.com User , 6 years ago
I was looking for cheesy romance and stuff that is way too cliche but I bought the book and was surprised to see it not cliche yet I interpreted it a young adult going through a short journey to find herself and I just loved how unique it was unlike other cheesy romantic novels. You expect one thing yet it goes the other way. 10/10 reccomend!

Published by Thriftbooks.com User , 19 years ago
As a high school media specialist, I like to read many of the books I purchase for my students. I haven't been disappointed by Sarah Dessen yet! Her works are so true-to-life and easy to relate to that my students love her!In "This Lullaby," Remy experiences many of the things high school students do: boyfriends, girlfriends, jobs, parent relationships, what to do after high school, and the infamous last summer before she's off to college. I think readers will be able to relate to Remy's view on her mother's fifth marriage, her close-knit group of friends, and her feelings toward Dexter, her last loose-end that needs to be tied up before she goes to college.This book definitely kept me turning the pages and I look forward to reading more from Sarah Dessen soon!

This Lullaby- This will not disappoint you!

Published by Thriftbooks.com User , 19 years ago
Remy has never been involved too long with a boyfriend, but who can blame her? Her mother is about to start her fifth marriage! Remy has actually come to believe that she has a heart of stone and that love is not real. When she?s least expecting it, she meets Dexter, her complete opposite. He?s a musician which has always been a warning sign for Remy considering her father, who is long gone, was one himself. Dexter?s clutter and vices soon make up a part of Remy she?s been missing. This book will teach you that first impressions can either be everything or nothing. It is the ideal book for teenage girls who need a good novel to keep them interested for awhile. I found I could relate to a lot of what the characters were going through. Their antics will melt your heart and give you a good laugh. After reading This Lullaby, I was so motivated that I continued on to reading three other books by Sarah Dessen: she definitely won me over!

Published by Thriftbooks.com User , 20 years ago
If put down in a nutshell, the plot of this book might sound uninteresting, cliche, or something equally bad. However, I have read other books by Sarah Dessen as well, and this is by far the best. And not only is it the best of her books, it's also one of the best teen novels I've read in a long time. THIS LULLABY is the story of a girl who has grown up with a mother who takes on husbands "the way other people change their hair color: out of boredom, listlessness, or just feeling that this next one will fix everything, once and for all." Remy never knew her own father even, and all she has of him is the song, "This Lullaby," that he wrote one the road the day of her birth.By the time she graduates from high school Remy has developed a careful schedual for all relationships she enters in to, and never allows any boy to get close to her heart, convinced that it is better to keep all guys at arms length so that they are unable to hurt her. Then, while planning her mother's fifth wedding, Remy meets Dexter, a boy who has so many qualities she dislikes. Though at first reluctant, Remy is eventually charmed by Dexter, who's shoelaces are always untied, and who insists on challenging people to do things such as eat ten bananas, or name more states than him before a specific lady is through picking up her dry-cleaning. Remy still believes that love is foolish, but Dexter helps her to learn otherwise.As I said, the plot sounds quite cliche. However, it's a lot more complicated than all that, the writing is superb, the dialouge is at times very witty and entertaining, and this is an all around enjoyable book. I was completely engrossed, and reluctant to put it down even when I was in desperate need of something to eat. Towards the end I felt as though I couldn't read fast enough, and I felt a kind of ache in my chest because I was so drawn into the story. Definitely one of the best books I've read in the past year.Recommended for readers ages 13+, mainly because some of the language may be inappropriate for those who are younger and more innocent.

Published by Thriftbooks.com User , 20 years ago
This Lullaby is about Remy, daughter of an eccentric, romance writer mother who has been married five times and a dead, musician father whose only legacy is a song called "This Lullaby." Remy, having seen her mother go through husbands like kleenex, is jaded about love and relationships; every time she gets close to a guy, she dumps him.Then along comes Dexter, who not only breaks her "no musicians" rule (he's in a band that sings - among other things - "The Potato Song"), he's also everything that drives her crazy.Sarah Dessen's talent for character development shines through in this tale of first love. Her characters are flawed, dysfunctional, and so realistic that reading this book is like visiting with old friends. The topics tackled in This Lullaby are written both believably and in an utterly unique way, so that an old problem - "What do you do when someone doesn't like you back?" - becomes a fresh, new story with an ending that will satisfy both romantics and cynics alike.

Another winner from Sarah Dessen

Published by Thriftbooks.com User , 20 years ago
Sarah Dessen quickly became one of my favorite authors after I read her books "Dreamland" and "Someone Like You". I was super excited when I found her new book, "This Lullaby", and settled down to read it right away.I was not disappointed. This book is amazing! It made me laugh out loud in some parts (Dessen has remarkable prose, and just her word choice and descriptions make for a humorous time), gave me butterflies in others, and had me feeling pretty sorry for the characters during certain scenes. Remy has got the guy thing figured out -- once the first heady, romantic feelings start to fizzle and "cracks" begin to appear in the guy's personality, Remy's out of there. Remy has plenty of experience -- her father left before she was born, leaving her with his sappy one-hit-wonder, "This Lullaby". Not a great gift, considering the lyrics "I will let you down." Plus, Remy's mother, a romance author, is now on her fifth marriage -- "This time it will work, Remy." But Remy doesn't share her mother's hopeful outlook on love.Then she bumps into Dexter, quite literally. She avoids him as much as she can, but he manages to pop up everywhere, and just where she needs him the most. He's the exact opposite of her usual guy -- messy, clumsy, and, of all things, a musician like her father. She runs away from him until he crashes through her bedroom window, and she finally decides to take a risk with this guy.They're a couple from then on. But Remy's done this before -- have a fun time with a guy through the summer, move on in September. Remy wants to head to Stanford in the fall leaving nothing messy behind her -- but Dexter might make this hard.The Dexter/Remy romance is just perfect. Dexter is far from being the perfect guy, but that enhances it. The ending is not picture-perfect, but we are left with plenty of hope for our couple's future.Dessen has scored another winner with this book. I recommend it wholeheartedly. :)
Trustpilot
Copyright © 2022 Thriftbooks.com Terms of Use | Privacy Policy | Do Not Sell My Personal Information | Cookie Preferences | Accessibility Statement
ThriftBooks® and the ThriftBooks® logo are registered trademarks of Thrift Books Global, LLC