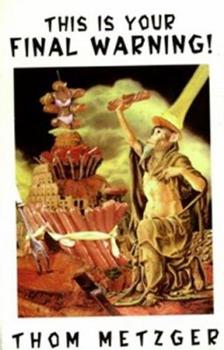 This Is Your Final Warning!

This description may be from another edition of this product. Thom Metzger writes anarchist horror fiction like Big Gurl, Shock Totem, and Dr. Penetralia—shotgun weddings of high art and low culture. This volume contains the complete rants and nasty little...

Worse than Hallucinatory, IT'S REALITY!

Published by Thriftbooks.com User , 13 years ago
Who is the most bizarre author you can think of? James Joyce? William S. Burroughs? Mark Leyner? John of Patmos? Compared with Thom Metzger, them guys're amateurs timidly sticking their toes in the water then quickly pulling them out. Although Metzger has written a couple of standard action/adventure novels (both of which are quite readable), "This Is Your Final Warning!" outdoes any other book in its strange and howling ridicule of society. It's not a product of drug ingestion but is instead the flash of a remarkable imagination. The stories and poems in this book beg to be read aloud so as to get the clang-tint of the man's music. The title piece is in the voice of a cross between a late-night hipster DJ and a Pentecostalist preacher on the verge of speaking in tongues. "All Right, Everybody on the Floor" is in the voice of a drill sergeant in the army of Organized Religion just before the Last Battle. Odd bits of arcane information (which turn out to be accurate) are thrown in. How did records come to be made of vinyl? What is sebum? You should know this stuff, people! When the book is not uncomfortably strange, it is interesting, and most often it is hilarious. You've NEVER read ANYTHING like this before. This is a collector's item, and the price keeps rising, so grab a copy while you can. This is your final warning.

Published by Thriftbooks.com User , 19 years ago
The short essays in this book read like fever dreams. You might feel drunk or like you're on a mind-altering drug due to the images this guy creates. This literature is very unique and should be administered in small doses until you get used to it. Not for anyone who collects Anne Gedde's books.

Not for the weak of mind

Published by Thriftbooks.com User , 20 years ago
This book is not what you expect. It is rants and essays, but it's more a guide book to spoken word performance art. It reads like proseltyzation. Take it out and share the madness with the world.
Copyright © 2020 Thriftbooks.com Terms of Use | Privacy Policy | Do Not Sell My Personal Information | Accessibility Statement
ThriftBooks® and the ThriftBooks® logo are registered trademarks of Thrift Books Global, LLC