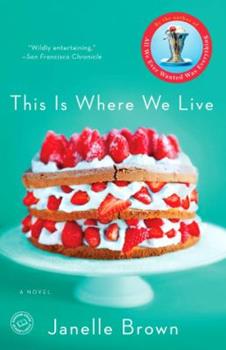 This Is Where We Live

Claudia and Jeremy, a young married couple (she's an aspiring filmmaker, he's an indie musician), are on the verge of making it. Her first film was a sensation at Sundance and is about to have its theatrical release; he's assembled a new band and is a few songs shy of an album. They've recently purchased their first home--a mid-century bungalow with a breathtaking view of Los Angeles--with the magical assistance of an adjustable-rate mortgage. But...

Published by Thriftbooks.com User , 11 years ago
Right now I am struggling to connect with the big Jonathan Franzen book. i know he's supposed to be amazing, but for me, no magic so far. Janelle's writing, though.....beautiful. Every line a bonbon. The book also succeeds as a big-picture snapshot of contemporary life. Timely, but timeless. She's on my shelf next to Thackeray and Tom Wolfe. More proof that these days LA women writers beat NY women writers.

The Way We Live Now

Published by Thriftbooks.com User , 11 years ago
I finished this book in a couple of days, a couple of months ago. Janelle Brown, as her fan base knows from her earlier book and journalism writing, is a super fluid, super fun writer who nails the way people speak. Her story is about an arty couple in LA who have what's best described as "good problems" (how to be artful and make money and not get bored with your marriage and not drive drunk in Los Angeles too often). They're the type of irresistible characters so many of us know, and often like than we probably should, in both real life and in fiction. There's one character, the crazy ex-girlfriend, who I'm sure a whole bunch of actors are drooling over playing right now. In years to come, "This Is Where We Live" will be perfect book to read to recall life as some folks are living it now -- sort of like the movie "Singles" for 2010. I also suspect fans of Nick Hornby will be fans of Janelle Brown.

Published by Thriftbooks.com User , 11 years ago
No sophomore slump, here. Janelle Brown follows up ALL WE EVER WANTED WAS EVERYTHING with a book similar in premise (spoiled white folk lose everything) but far, far different in its ultimate destination. There is a generosity of character here that allows the reader to feel for the two protagonists even when they make ridiculous choices that could render them unlikable in less nimble hands. Another nice thing about THIS IS WHERE WE LIVE is that it becomes a richer, deeper experience as it goes, rather than losing steam in the final third, as so many novels seem to. The climax is realistic and satisfying; the dialogue at it's most raw and real in the latter half of the book when all Hell has broken loose. Brown is a gifted writer falling somewhere between froth and bona-fide literature. It's a great combo and here's hoping she takes a lot of time between books to hone her skills rather than becoming a bestseller factory like so many young authors seem to these days.

Published by Thriftbooks.com User , 11 years ago
A riveting book that's timely, surprising and funny. It breezes along, like great page-turners do, but hits you deep. Highly recommended.
Copyright © 2022 Thriftbooks.com Terms of Use | Privacy Policy | Do Not Sell My Personal Information | Accessibility Statement
ThriftBooks® and the ThriftBooks® logo are registered trademarks of Thrift Books Global, LLC