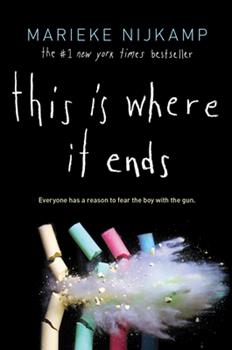 This Is Where It Ends

by Marieke Nijkamp and Nick Podehl

The reviews are in! This Is Where It Ends, the #1 New York Times bestseller and one of the Best Books of the Decade (Buzzfeed, Paste Magazine, BookRiot), could break you. I am speechless. The saddest book I have ever read. Literally tore my heart out. Go inside a heartbreaking fictional school shooting, minute-by-terrifying-minute. Everyone has a reason to fear the boy with the gun...10:00 a.m.: The principal of Opportunity, Alabama's high school...

Published by Entertainedest , 7 months ago
This book was amazing. The author just captures you in their words. You are always on the edge of your chair wondering what will happen next but also not wanting to move to the next page

Published by Lindsey , 10 months ago
The only reason I finished this book was because I had to for my book club. Otherwise I would have stopped after 20 pages. I would not recommend this book. It was unrealistic in terms of plot and characters, shallow, and overly dramatic. There was no sense of urgency. There was no fight for survival. No characters exhibited any sort of desperation. The timeline didn’t seem to add up (how did it take 45 min for officers to arrive?) The 4 main characters had the same boring narrator voice, and were under developed. The school shooter Tyler was the most under developed character, which was so disappointing. This book should have explored the WHY- Why did Tyler do this? What makes a teenager turn on his sister and kill his peers and teachers? This question is never answered. What made him snap? We never learn. We know through flashbacks of the main characters that he had a difficult life, but that doesn’t answer the WHY behind his actions. Also something to note- we learn that Tyler was the BULLY, not the one being bullied. Typically a school shooter is an outcast, one that doesn’t fit in, not the other way around. So it just made his character feel fake / like a villain in a movie. The writing style was also a big turn off- it dramatic on the verge of immaturity: “I wish I could leave too. I wish I could stay.” “Opportunity is no place for secrets. Not anymore. Not after today. We are home” I’m tired of authors writing in this over sensationalized style when their words actually have no meaning. This could have been a moving and compelling story but it was a complete fail. The author says in the interview questions in the back of the book that she spent so much time researching school shootings but I really don’t see any evidence in her story to prove that

I heard great things about this book, hoping it lives up to the fame :)

Published by Alexis , 1 year ago
I like that the concept of the book is about something that can happen in real life at any time.

Published by Hannah , 1 year ago
I get like there wasn’t much of an ending to this book. It also slightly glorifies the tragedy of school shootings.

Published by victoria12 , 1 year ago
First off, the writing style is awful and bland. Not only were some parts hard to keep track of, but lots of events within the book didn't make sense or were unrealistic during a school shooting. Descriptions of the rooms or areas the characters were in were difficult to visualize or make sense of. I disliked this book because the author seemed to be sensationalizing or romanticizing school schoolings. I was not a fan. Definitely a waste of time.

Published by Jordan Marie , 1 year ago
From the perspective of four unique characters, the hour in which this book takes place is thrilling and gut-wrenching. It highlights the interpersonal relationships between the main characters while also giving you a chance to love their friends and family. During the end, I couldn’t put it down. If you’re into quick reads and dark stories, this is a good one for you.

Published by Robert Pattinson ;) , 2 years ago
Trigger warnings for this book! I like this book slot it was a slow burn, interesting writing. Not by favorite because of the writing but still enjoyable!

Writing could have been better

Published by hutcheh , 3 years ago
The story was okay but with to many characters and the way the author jumps around made it kinda hard to read. I honestly would not recommend this book. If interested in the topic check out nineteen minutes by Jodi Piccolt

Published by Thriftbooks.com User , 5 years ago
This is the first book that has ever brought me to tears. I never once put down the book for a second while reading it. It was truly amazing and breathtaking!
Trustpilot
Copyright © 2022 Thriftbooks.com Terms of Use | Privacy Policy | Do Not Sell My Personal Information | Cookie Preferences | Accessibility Statement
ThriftBooks® and the ThriftBooks® logo are registered trademarks of Thrift Books Global, LLC