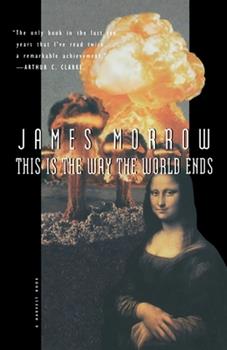 This Is the Way the World Ends

The Gulliver's Travels of the nuclear age, the Alice in Wonderland of the arms race, this mordantly funny and visionary tale of the apocalypse was a Nebula finalist. The trouble starts when George Paxton ingenuously signs an admission of complicity in starting World War III. "The only book in the last ten years that I've read twice...a remarkable achievement" (Arthur C. Clarke).

Published by Thriftbooks.com User , 16 years ago
As he does in his other books, Morrow here uses fantastical elements for maximum satirical effect. The question is whether these elements detract from the story's satirical force, which is what Beth Ann Mills' Library Journal review above suggests. This isn't just a question of the reader's ability to suspend disbelief, since the author obviously has some responsibility to make the story plausible. Mills, though, doesn't appreciate that far from conflicting with the book's satirical power, Morrow's satire depends on the novel's fantastic parts. Morrow typically begins with a fantastic premise that provides the perfect setting in which to skewer his targets. Take his book, Towing Jehovah. God's gigantic body drops dead from the sky. God is clearly now dead, but this means he was once alive. This is a rich starting point for showing that both atheists and theists (but especially theists) are ridiculously wrong. In the case of his satire on nuclear war, TITWTWE, Morrow mixes realism with fantasy. The nuclear war itself is described in horrifying detail. The arguments for and against nuclear deterrence are examined in a concrete way. Contrary to Mills, the giant prehistoric bird is explained in ordinary biological terms and is therefore, strictly speaking, science fictional not fantastic. The flying tailor shop is also science fictional. This isn't to say that a prehistoric bird and a flying tailor shop aren't fantastic in a less technical sense. Even if we put to one side its genuine fantastic themes, TITWTWE still wouldn't be a straightforward novel. This is to that even speculative science fictional ideas are fantastic in the sense that they're highly unusual. Perhaps the overall strangeness of Morrow's novel detracts from the serious points he may want to make. My point, though, is that Morrow's extreme kind of satire depends precisely on the plot's strangeness. I'll show this below in the spoiler alert paragraph. The book's main fantastic idea has to do with the nature of the people who conduct the trial of the nuclear holocaust's survivors. The reason these people are genuinely fantastic is that Morrow doesn't even attempt to explain in realistic terms how they come to be or what rules govern their abilities. He says that they're a strange consequence of a species extinction event, and that they "gain the continent." But the explanation Morrow does give establishes the book's satirical thrust. Contrary to Mills, these people are not aliens. If they were simply aliens, they would be science fictional not fantastic. Indeed, Morrow has a character say at one point that aliens might be observing the trial, and I would have been satisfied if they had turned out to be aliens or the work of aliens. ***Spoiler alert. Don't read further in this paragraph if you haven't yet read TITWTWE. The "unadmitted" people are simply the humans from the future that would have lived had there been no nuclear war. They come from the possible world that would hav

Funny but not in a ha-ha way

Published by Thriftbooks.com User , 16 years ago
A lot of writers, when trying to do the post-nuclear story thing, tend to go for stark realism, trying to make the situation as brutal and as tangible as possible, to give the reader the sense that this is What Nuclear War Is Actually Like. Stuff like On the Beach derives its quiet horror because it feels like it could be happening, that if the events that caused the end of the world actually transpired, this is how it would go down. Of course all of that is only our best guess, because the only real experience we have with nuclear war are the bombings in Japan and that's from the entire world deciding to annihilate itself in a storm of mushroom clouds. So here Morrow seems to be taking the opposite tactic and steering directly into absurdity. This is a book you take seriously and yet not take seriously. For every genuinely horrifying moment, Morrow seems to be undermining himself with another scene that seems to suggest that he sees it all as a big "who cares anyway?" joke. The plot is a many jointed thing, starting off when everyman George Paxton, worried over nuclear war, tries to get a survival suit for his young daughter. In the process he signs a paper saying he's complicit in the buildup to nuclear war. Shortly after, the war occurs and humankind is basically wiped out, except for six people who it turns out have been chosen for various reasons not to get wiped out. Morrow outdoes himself with the scenes of nuclear disaster which are legimately horrifying and certainly make the book feel grounded in reality. Alas, and this is where he loses most people who are reading the novel, the whole thing veers off very quickly into a very strange place. It turns out that the six people (including George) have been captured by the "unadmitteds", basically people who would have been born had the entire world not collapsed in fiery holocaust. They're mad, of course, that they don't get a chance to be born and thus want to take it out on the few people who are left and make them stand trial and try to get them to explain why they did nothing to stop any of it. Now, granted, the reader probably should have saw it coming, since the novel is bracketed by scenes of Nostradamus explaining the whole story to some boy several hundred years prior . . . that alone should have told you the book isn't going to be strictly realistic. Morrow does make the plight of the unadmitted rather poignant, although he doesn't get as much milage out of it as he probably should since the trial itself turns out to be rather flippant, devolving into semantic debates that nobody seems to take very seriously, even when people say they are. Morrow's forte here is bleak humor, the kind where someone's arm is chopped off and you're compelled to laugh at it. For all those folks who thought Slaughterhouse-Five was hilarious, this is along the same lines, it's funny but at the same time it's not, you only laugh because you're glad it's not happening to you. However, the

Published by Thriftbooks.com User , 19 years ago
"This Is the Way the World Ends" is a moving, surreal book dealing with the ultimate cost of World War Three - extinction. George Paxton is one of six survivors saved from the nuclear war. The evacuees are on a submarine heading for the Antarctic, where they will face trial by the "Unadmitted" - the would-have-been descendents of those killed by the holocaust. George had signed a sales contract for a survival suit that would have saved his four-year-old daughter. The contract indicated he would do nothing to stop any nuclear war that may take place in the near future.A short time later George saw first-hand the results of a holocaust he did nothing to stop. The innocents mutilated by blast, fire and radiation; thousands of years of human progress literally gone within a flash. One of the unforeseen effects of the nuclear war is time distortion. While a day passes for George on the submarine, years elapse for the dwindling population trying to live in a post-holocaust world. A world devastated by the effects of nuclear winter, ultraviolet light, plague, mutation and sterility.George and his fellow defendents then have to justify their motives for allowing the ultimate atrocity to occur. Guilty or not guilty?There is a mountain of books out there dealing with the nuclear holocaust, but this novel still comes across as original, sad and witty. You do have to read the book with an open mind. It's like one of those weird French films. I can just imagine the French making a film of something like this, along the lines of "La Jetee" or "Le Dernier Combat". As a satire, this book is excellent. When you find out how the holocaust started, you won't know whether to laugh or cry. It's ironic to think that our fates depend on the decisions we make. Our lives are in the hands of people we vote for. The decisions seem sensible at the time, but then they become regrettable. In the most harrowing way, this book deals with consequences that come from an abundance of bad decisions.

Published by Thriftbooks.com User , 20 years ago
It is rare to find a book that is both intellectually and emotionally satisfying. James Morrow's vicious and honest indictment of human madness and the complicity of inaction acheives both. This is not an easy book, becuase it doesn't flinch or pull a single punch. Few writers have the courage to directly confront issues of morality and religon head on, but Morrow does. It is a testament to his skill that after reading three of his books, I still could not decide if he was a devout Christian or a devout Atheist. (I've since found out he is a devout skeptic, which is healthy enough, I guess). I haven't yet embarked on his "Godshead Trilogy," but after this book, "City of Truth," and "Only Begotten Daughter," I know the glass knife of his wit is no accident. In a way, it is a shame he gets shelved in science fiction, since his is every bit the literary child of Swift and Twain. Kids will read him in future High Schools, if he and his books aren't burned as heretical first...

Published by Thriftbooks.com User , 23 years ago
In the same vein as the black comedy "Dr. Strangelove", "This Is The Way The World Ends" is a true achievement in cautionary satire. The men who helped launch the war and the civilian fighting for his life are held accountable for the world's destruction. Paxton's near-death and final reckoning with his family are among the most poignant work in any piece of fiction I've ever read. To remember just how real the nuclear threat was not even so long ago, "This Is The Way The World Ends" is an absolute must-read.

This Is the Way the World Ends Mentions in Our Blog