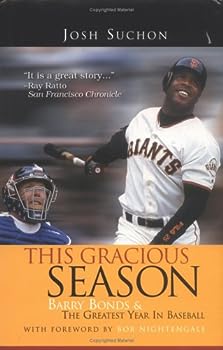 This Gracious Season: Barry Bonds & The Greatest Year in Baseball

Just as players and coaches are hitting their stride at spring training, a new book, This Gracious Season (Winter Publications, March 2002), reminds us what a magical season 2001 was for the San... This description may be from another edition of this product.

Published by Thriftbooks.com User , 19 years ago
This book provides a fascinating glimpse into the behind-the-scenes world of major league baseball, its rivalries and intense contract negotiations.It approaches the story as an insider's look at a somewhat unlovable sports figure and the greatest year in his career (the author is a Giants beat writer.) I learned a lot about Bonds, his respect for family and privacy and his feelings towards his teammates and fellow MLB players as well as his much-publicized, love-hate relationship with the media.If you're a fan of the game or a student of the baseball industry, this book should be a must-read.

Published by Thriftbooks.com User , 20 years ago
Okay, I'll admit it. I DO like Barry Bonds, so I looked forward to reading this book. Was Josh Suchon a Bonds fan? Well if he wasn't when he started, he was by the time he was done! I think the book was written fairly, without bias, and it was very exciting, moving, and a great read. I knew the outcome, but I couldn't put the book down. And I didn't want it to end.If you don't like Bonds, don't buy this book. If you are on the fence, you ought to give it a try, because it may change your mind. Suchon did a great job recreating a fabulous season, during a very trying time in our history. I will read this book again and again. Thanks for writing it, Josh!

A Toast to the Baddest Player in the Game

Published by Thriftbooks.com User , 20 years ago
what a Year Barry Bonds had last year & Continues to have this Season?? the Man no matter what folks say or think about Him His Talent & drive are out of this World.Last Year was Magic as far as I'm Concearned.He is my Favorite Baseball Player still a 5-Tool Player.I enjoyed what was stated.Barry Bonds is something else Hopefully One Day He can get a Ring.when it's all said & done there won't be much that Barry hasn't done in His Great Baseball Career.

Published by Thriftbooks.com User , 20 years ago
I have recently completed reading This Gracious Season, and I wish the book had no end!! It was great to find and read a sports novel that was not a statistic-laden glossary, one that included all of the elements in and behind the dugout. Not being a tremendous fan of Barry, I have now come to respect him more after knowing of all that went on during his record breaking season.

Published by Thriftbooks.com User , 20 years ago
As I began to read the book, This Gracious Season, by Josh Suchon, my initial reaction was that this was more than I ever wanted to know about baseball - or Barry Bonds, for that matter. But it didn't take long to really get into it as I counted each and every homer and read about all the other records he shattered. The author has an engaging style and a superb way of integrating the past with the present so that by the end of the book the reader has a complete picture of Barry Bonds - the man, the career and the records. I look forward to following Barry Bonds this season, and to another book by Mr. Suchon, in the not too distant future.
Trustpilot
Copyright © 2022 Thriftbooks.com Terms of Use | Privacy Policy | Do Not Sell or Share My Personal Information | Accessibility Statement
ThriftBooks® and the ThriftBooks® logo are registered trademarks of Thrift Books Global, LLC