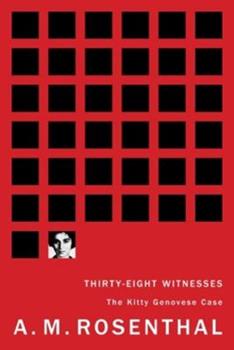 It remains one of New York City's most notorious deaths: When 28-year-old Kitty Genovese was brutally murdered in an attack that took nearly 30 minutes, not one of the 38 witnesses did a thing to stop the murderer or call for help. AM Rosenthal, who later became one of the most famous and controversial editors of the New York Times, was the newspaper's city editor then; the murder happened on his beat. He first published this book in 1964, the year...

Not your everyday murder, and yet, it tragically is.

Published by Thriftbooks.com User , 13 years ago
Not that far back, I was with a group of friends and one of them recounted how he had seen a woman fall in front of a restaurant. We inquired if she had gotten up, and he said no. But, he insisted, other people were there to help. We asked why he did not volunteer to help the injured woman. He said that he would have been more of a burden than a help. And it was through this simple discussion that the case of murdered New Yorker Catherine "Kitty" Genovese popped up. A.M. Rosenthal's little book, consisting of only 69 pages, is really an essay on the dangers of apathy and inaction. It details only the facts and is not laced with personal opinions. It does not offer any psychological insights nor expert viewpoints in relation to the criminality of the human mind. All that is given is just the cold hard facts. And sometimes that alone is sufficient, especially in this case. At three in the morning on March 13, 1964, Kitty, as she was commonly referred to, was returning home to Kew Gardens in the borough of Queens after her bar shift was completed. Upon exiting her vehicle, she saw a man in the darkened shawdows, stealthily moving towards her. The man in question was Winston Mosley, a married man with two kids, a house and a good paying job. But on that particular night, while his wife worked the evening shift as a nurse, he deliberately scoped and prowled the area with the sole intention of committing murder on a helpless woman, all because he simply felt like it. Sensing the danger that she was in, Kitty Genovese ran towards a police call box, but it was too late, for he stabbed her repeatedly as she screamed at full volume, "He's trying to kill me." Witnessing this were thirty-eight neighbors, who watched from their windows and yet, did nothing. Even before the attack and rape happened, people saw and knew that something vile was going to take place. And when it did and the screams became audibly clear in the crystal cold night, apathy soaked the consciences of those who were privy to the dark happenings while they sat on their perch and watched. Nobody picked up a phone to call the police while tortured screams saturated the night. People were at a standstill and others simply went back to bed, even though they knew full well what was happening. One witness said that he just didn't want to be bothered. Rosenthal's pamplet is an excellent piece of journalism, because it is not embossed with any calibur of bias. It is not embellished in order to evoke feelings that are favored to sway in any particular direction. It is an apolitical work. Yet, Rosenthal has enough confidence in his readers and in their intelligence to just leave it alone at the facts and nothing else. He also does not pass judgement on the witnesses, not profiling them in any way or putting them in compartmentalized boxes with labels that only a neophyte psychoanalyst could come up with. He does his job and reports the facts alone. By so doing, he shines a light to the reader

A Penetrating Look At the Ugly Face of Apathy, Alienation, and Indifference

Published by Thriftbooks.com User , 15 years ago
On March 13, 1964, Kitty Genovese was a single woman of 28 years who worked as a bartender and lived by herself in the Kew Gardens section of the Queens borough of New York City. She was killed, in three separate attacks in three separate places, over a period of one half hour by a man she had never met, one Winston Moseley, who was married, employed, and who upon being captured had no official criminal record but confessed to two other murders. Between her death and his capture, he committed three other robberies. The author, a well known columnist, editor, and foreign correspondent for the New York Times, does not ask or answer typical journalistic questions. We learn nothing about Kitty Genovese's educational record, employment history, love life, family life, religious or community activities, etc. He notes her lack of prominence, and that her death initially received a mere four paragraphs in the New York Times. What we learn instead is that her cries for help in the middle of the night led thirty-eight people to watch her being fatally stabbed, and the reaction of 37 of them was to treat her ongoing murder as a bad television show that could safely be turned off. None of the 37 called the police. The 38th witness first went to someone else's apartment so his calls could not be traced to him, called a friend for advice, and then, after she was dead, called the police, who came within two minutes. Some of the people in the neighborhood casually knew Ms. Genovese, but not well enough to spring into action. The author sees them mainly as apathetic, but also as alienated from the community of which they were a part and somewhat indifferent to the fate of their fellow citizens. The focus of the New York Times on the 38 witnesses who did not act in a timely fashion made this a national news story. Other similar stories of apathy, alienation, and indifference around the world came to light. Some New Yorkers blamed the police for slow response time, probing personal questions of complainants, and disrespectful treatment of callers, saying that the poor record of the New York Police Department was the reason that people did not call. The New York Times diligently investigated the various methods used by other urban police departments to receive citizen calls, and successfully joined the Police Department's ultimately successful attempt to have a citywide emergency number. But none of the 38 used that excuse. Those willing to talk to the press expressed apathy, fear of consequences, fear of involvement, reluctant spouses,and other similar reasons that look petty and inconsequential when one considers that a life was lost. Before they began to consider the press interest in their decisions to be harassing and advisable to avoid, they told the New York Times that they had learned from their experience and would not do it again. To his credit, the author does not get on a high horse. He notes that he had turned away beggars repeatedly, be

Published by Thriftbooks.com User , 22 years ago
Abe Rosenthal is the greatest editor opf his generation, a man who transformed The New York Times and modern-day journalism. Earlier, he was a wonderful foreign correspondent, winning a Pulitzer Prize for his dispatches from Poland. This book, written when he was metropolitan editor of The Times, is about one of the most gruesome urban tragedies to occur in New York. This book needs no review. It simply needs to be read, and its lessons remembered by all of us.
Trustpilot
Copyright © 2022 Thriftbooks.com Terms of Use | Privacy Policy | Do Not Sell or Share My Personal Information | Accessibility Statement
ThriftBooks® and the ThriftBooks® logo are registered trademarks of Thrift Books Global, LLC