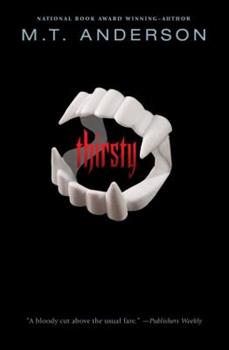 "Entertaining, disturbing, memorable, and sophisticated, this mortality tale will continue to haunt after the last pages are turned." - School Library Journal All Chris really wants is to be a normal kid, to hang out with his friends, avoid his parents, and get a date with Rebecca Schwartz. Unfortunately, Chris appears to be turning into a vampire. So while his hometown performs an ancient ritual that keeps Tch'muchgar, the Vampire Lord, locked in...

Published by Hilary , 2 years ago
I couldn’t get 30 pages into it because the main character is unlikable in a boring and predictable way and the universe and plot fail to be intriguing or creative in any way. The idea might have been okay if it hadn’t suffered so much from the character and the writing. Try Coldest Girl in Coldtown - that’s how you write a modern YA vampire story.

Published by Thriftbooks.com User , 15 years ago
I thought those words would never leave my lips (or fingertips), but it does seem that many people who gave negative reviews for this book were missing the entire point, at least as I understand it. It even says in the back of the book that the author wanted to write about how someone can struggle "with the isolation of wanting to do the right thing when there was no right thing to do." The hopelessness of the novel at the end was intentional. There are not always concrete conclusions, let alone HAPPY concrete conclusions. In life, there are no definite beginnings and ends, except for birth and death of course. And that would be a long book. So if it ends on a kind of "well, what now?" note, it's all the more realistic. The writing style I think is more a matter of aesthetic than anything. I didn't really like it the first time I read it, but it grew on me. As for Chris, and his personality, it's actually pretty realistic. If I look objectively, I can see a lot of myself in him. Especially me a few years ago when I was his age. For the guy who said he was swept away by other people's actions and never did anything, well, he actually mentions that IN THE NARRATION. That was intentional, too. How many teenagers do you know that actually take charge of their life? I certainly didn't. And the people who are complaining about vampires being a fact of life, come on man, it's an allegory! So, ok, this book isn't for everyone, I guess. But before you criticize it, make sure that you're not missing the point. Then again, maybe I don't know what the hell I'm talking about. In which case, just ignore me.

Published by Thriftbooks.com User , 17 years ago
Once beginning this book, I was surprised to finish it within a week. Most books are boring to me and drag on for months. :-)I couldn't put this book down. Great elements for a horror, twisted, teenage book. Read this book even if you like powerpuff girls or fruit-salad. (I don't like either).Read the book.

I don't see enough of these kind of books

Published by Thriftbooks.com User , 17 years ago
Wow, this book was good. For once, I found a book that wasn't completely cheesy. I loved how Chris sticks with his ethics all the way through, assuming he doesn't kill a family member after the book ends. Also, I really liked his confusion on what to do,it's so sweet that he has some crush on someone he couldn't possibly have, and in the end, like in real life, he doesn't always get the girl. I just loved the dramatics in the story, it was filled with a lot of emotion, I don't see that enough in books. Especially the feeling of horror. The ending was abrupt, but I still liked it. It reflected a more realistic view or life.

Published by Thriftbooks.com User , 21 years ago
I was amazed at this powerful story of a young man confronting forces so far beyond his control that every plan he makes, every instinct he has absorbed from the horror movies that he and his friends constantly discussed prove to be woefully inadequate. _Thirsty_ is an amazingly example of a genre writing against itself. On tap of that, I liked the tone of Anderson's first-person narrator -- sarcastic, confused, but also shy. He's a 15- or 16-year-old guy trying to figure out how the world works -- and if that weren't enoough, he's beginning to suspect he's a vampire and a pawn in a mysterious battle between the Forces of Light and Dark. I'm going to read everything M.T. Anderson writes for the rest of my life.

Published by Thriftbooks.com User , 22 years ago
With biting humor, this first-time author offers readers a cynical look at the onset of vampirism coupled with adolescent angst. Chris struggles with a crush, his annoying brother, and his parents' failing marriage. But all of that seems important -- not when the fate of the universe appears to be at stake. A very Buffy-The-Vampire-Esque horror comedy for the slightly darker, simply smarter side of the YA crowd.
Copyright © 2020 Thriftbooks.com Terms of Use | Privacy Policy | Do Not Sell My Personal Information | Accessibility Statement
ThriftBooks® and the ThriftBooks® logo are registered trademarks of Thrift Books Global, LLC