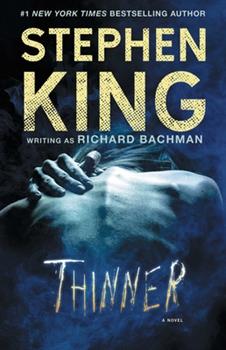 The "extraordinary" ( Booklist ) novel of one man's quest to find the source of his nightmare and to reverse it before he becomes...nothing at all. This #1 national bestseller from Stephen King, writing as Richard Bachman, "pulsates with evil...it will have you on the edge of your seat" ( Publishers Weekly ). "You can't do anything....It's gone too far. You understand, Halleck? Too...far." Attorney Billy Halleck seriously enjoys living his life of...

Published by Kristian , 29 days ago
Love the book, but I paid extra for a book that said it had the dust jacket and it arrived without one. I would have paid cheaper for one without it if I knew it didn’t have one

Published by Teddy Jo , 4 months ago
Classic Stephen King book weaving together both supernatural and real life scares. This book isn't exactly terrifying, but it is definitely a page-turner.

Published by Thriftbooks.com User , 14 years ago
I really enjoyed Thinner. I read it during Halloween for book club. We each chose a Steven King book, and this is the one that I chose. I had seen the movie, so I wanted to read the book. I think the book is a lot better than the movie. I enjoyed this book because of all the taboo things that occurs to the main character. I loved the aspect of the gypsies and this big curse that the main character was dealing with. The idea of how they were going to remove the curse opened a whole new can of worms. I was very interested, and glad to obtain more details about the story from the book than what I got from the movie! I loved the characters in this book, and it was interesting to see how the curse played a key role in their lives as well. Great book!

Published by Thriftbooks.com User , 16 years ago
I have to confess that I rarely EVER read Stephen King novels or watch his movies. I am a big fan and think he is one of the most (disturbingly) creative authors out there. But frankly, his movies and books scare the bejesus out of me! I NEVER forget his terrifying plots! When he first started with movies like Christine and the book "Thinner" - he was a little tamer,I believe. I couldn't pass up the premise of this book and its title, so steeled myself for the nightmares. I found "Thinner" to be thoroughly captivating! The ironic ending reminded me of O'Henry's short stories and I believe that most readers (even those who don't typically read King) will totally be immersed in this great tale.

King is the true King when he dons the name Bachman

Published by Thriftbooks.com User , 21 years ago
This is definately King at his best--King as Bachman (the only time he failed with this name is with The Regulators.) This novel proves to be short, quick, and easy reading, but no weaker in quality because of it--stronger, in fact, than his several hundred page long works. The story is interesting, and adds original elements to the Gypsy Curse plotline. Many readers may find thereselves initially envious of our Lawyer/Protagonists new found diet plan; hit one Gypsy who isn't watching where she's going and you can shed the pounds quickly. But the envy is quickly replaced by horror as a formerly rotund man finds himself anorexic (minus the critical part of the medical deffinition: he does not think he is fat.) This book also makes you question certain aspects of justice and revenge: who is really the "good guy" and who is really the "bad guy." I find that the lines here sway back and forth until they are finally blurred beyond visibility. Also, should revenge be allowed to extend to the avenged against's innocent loved ones? Probably not, but you are still made to think.This is a very worthwhile read, and one of King's Semi-masterpieces.
Copyright © 2020 Thriftbooks.com Terms of Use | Privacy Policy | Do Not Sell My Personal Information | Accessibility Statement
ThriftBooks® and the ThriftBooks® logo are registered trademarks of Thrift Books Global, LLC