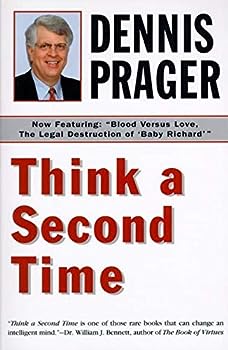 What are the two great lies of the 20th century? Is there a solution to evil? What matters more, blood or love? Can a good man go to a striptease show? Do you think you have the answers? ...Think a... This description may be from another edition of this product.

Published by Thriftbooks.com User , 16 years ago
"Clarity" seems to be a watchword for Dennis Prager and clarity is what he delivers here. Simple principles with profound implications for people's lives and for our culture. Whether you agree or disagree with any specific point, it is most certainly worth reading and thinking about. SUMMARY: Wisdom on every page.

Published by Thriftbooks.com User , 17 years ago
OK, the title of my review might seem a little overboard, but I can't stress enough how important this book is. One of Prager's favorite statements is "Clarity is more important than agreement", and he is brilliantly clear at articulating the need for a universal morality that come from a universal source. This is the definition of ethical monotheism, which he shows as the supreme value to which all of humanity must aspire. He stresses why a universal morality is even more important that life, love and compassion. When these beautiful values are rendered supreme, good and evil lose their relevance. One of the greatest epiphanies I pulled from the book was the importance of distinguishing between the person-to-person laws (ethics), which are the supreme value, and the person-to-God laws (holiness). He stresses all holiness laws must, by definition, be ethical, but not all ethical laws are necessarily holy. Therefore, acts like pre-marital sex between consenting adults, attending a strip club, etc., may not elevate us from our primal tendencies, so they are therefore not holy. But as long as these acts don't result in treating others differently from how we would hope and expect to be treated, the acts are not necessarily immoral. Sadly, he states, many religious people from all faiths stress the importance of their dogma and rituals above morality--they stress the holiness laws above the ethical laws--and that is when religion is abused and gets a bad name. There are many discoveries like these which I found immensely instructive. Prager is a man with the gift of being able to brilliantly articulate what he care most about, as stated by many: getting people obsessed with what is right and wrong.

Published by Thriftbooks.com User , 19 years ago
Awhile back, my father and I attended a fundraising dinner for a local organization in which the keynote speaker was Dennis Prager. This was essentially my first exposure to this gem of a human being and guide unto many. How else can I put it: I was, and still am, enthralled by him. Since then, I have listened to his radio show and have begun to read his articles and books. In Think a Second Time, we read 44 essays covering 44 distinct subjects, in which we are indeed forced to "think a second time". While I certainly don't agree with all of what Prager presents and the conclusions he reaches in certain areas, his arguments are all engaging and well thought out. I previously have never found such convincing arguments in favor of capital punishment before reading this work. I laughed out loud several times when reading Prager's dictionary exposing the true implications of liberal terminology. I appreciated the chapter dealing with religion potentially making a person cruel along with the transcription of Prager's radio conversation with Isaac, a caller to the show, dealing with the evil massacre of Baruch Goldstein in 1994. Today, when many distort and pervert religion to carry out evil, it becomes more imperative than ever to condemn such acts in the strongest of terms. This is especially true within the Orthodox Jewish community in which there are tragically those that laud Goldstein's deplorable act. Prager's conversation with Isaac brings much needed moral clarity in this area. Of note, another chapter particularly illuminating was that dealing with faith in G-d after the Holocaust. Enough said of this outstanding work. Seek it and read it for yourself. You will most certainly be glad you did.

Published by Thriftbooks.com User , 20 years ago
Truly one of the best books I have read in YEARS! Even if you are like me, and think most issues are pretty black and white, and you know where the line is drawn, Dennis Prager will make you think a second time. With powerful insight into many moral and social issues of today, this book made me rethink positions I once would have thought impossible to budge. Further, he demonstrates why knowing what is right, and living those truths is so important. This book made me think, and it made me pray, and it has likely made me a better person for reading it.One might find fault with Mr. Prager's use of Talmudic Law in support of his positions, if one is not a Jew or familiar with the faith. As a Christian, I did not find that to be a stumbing block, but instead, an opportunity to expand my understanding and sensitivities. I respect Mr. Prager for being a man of faith, and for walking in the light of his faith (not merely wearing the religion, but embodying it.) This made his work MORE powerful, MORE honest, and certainly MORE significant to me than it could have been without this faith-based support.I have liked Dennis Prager on television, but I admire Dennis Prager now, for having read this book.

Published by Thriftbooks.com User , 22 years ago
Dennis Prager sets himself two closely related tasks in this volume: to provoke his readers to "think a second time" about matters we may have taken for granted, and to prod us to care more about ethical behavior than we do about pretty much anything else. He succeeds at both jobs.Prager's basic contention is that ethical monotheism is the necessary foundation of all moral thought and practice. While ethical monotheism was revealed to and through the Jewish people, it does not demand that everybody in the world convert to Judaism; however, Jewish thought has traditionally set aside a group of ethical laws (called the "Noahide laws") which are binding on all humankind. (Here he is of course on very solid ground.)Throughout this work, Prager -- who describes himself as a "passionate moderate" -- applies the insights of traditional, historic Judaism to a host of pertinent social issues, thinking the issues through carefully and insightfully to sometimes surprising conclusions.I won't discuss his conclusions in this review because that would undermine one of Prager's purposes in writing the book in the first place. Having spent so many years working in the media, he's not expecting many (or even any) of his readers to agree with him about everything; though of course he is committed to his own particular conclusions, what he _most_ wants to do here is to stimulate thought and debate.He's good at it, so I'm going to leave that job to him. If you want to know what he thinks -- or, more importantly, _how_ he thinks -- you're just going to have to read the book!
Trustpilot
Copyright © 2022 Thriftbooks.com Terms of Use | Privacy Policy | Do Not Sell or Share My Personal Information | Accessibility Statement
ThriftBooks® and the ThriftBooks® logo are registered trademarks of Thrift Books Global, LLC