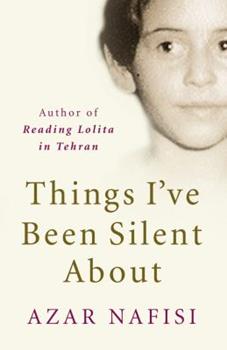 Things I've Been Silent about: Memories of a Prodigal Daughter

"Absorbing . . . a testament to the ways in which narrative truth-telling--from the greatest works of literature to the most intimate family stories--sustains and strengthens us."-- O: The Oprah... This description may be from another edition of this product.

Published by Thriftbooks.com User , 13 years ago
I loved "Reading Lolita in Tehran". As an Iranian-American it was also my own story; the story of the revolution and the betrayal (at the greater level, the betrayal toward a nation). Plus, my thirst for the literature was fully satisfied with the detailed analysis of Nabokov or Austen, etc. But "Things I've been silent about" way passed my expectation. Even if Nafisi's childhood was a different kind of childhood (compared to my own childhood) still I couldn't stop feeling more and more related to her story, and I ended up having a total understanding and full empathy toward her. "Things I've been silent about" is also the story of a betrayal, but it is more at a personal level. Through this story-telling she has depicted the image of an Iran (pre-1979 revolution) I had heard about, but I didn't know. An Iran I had always loved to know, but living in Diaspora had made this task too hard to accomplish, almost impossible. I especially loved the way Nafisi remembers her father and I think the image of Mother is not as negative as some people have suggested. I find the book an honest look, even an effort to understand and to justify her parents actions and reactions, even to forgive them. It is a reflection over this haunting past, something that many of us need to do to get over many of our isuues! Nobody's all evil or all angel, and Nafisi mangages to show the values and also the shortcomings of her parents in such an elegant way, most importantly with love and compassion. Honestly, I have never been a fan of history books, but what I love the most in Nafisi's writing is the way she can mix her personal history with the history of Iran and how easily she can connect to her readers. The way she grasped their attention and doesn't let go! Plus, I was so impressed with her craft of writing....The powerful ending of each chapter left me in awe, and each time, I had no other option than to keep reading the next chapter! It was a wonderful book and I would definitely recommend it to all the Iranians and non-Iranians!

The unspoken truth of growing up in Iran

Published by Thriftbooks.com User , 13 years ago
Azar Nafisi takes us to her childhood home of Iran in her latest book, Things I've Been Silent About: Memories. Since the days of Persian rule, the country of Iran has suffered political and religious turmoil. While growing up, Nafisi experienced first hand the bombings of her town during the long war with Iraq, seeing many family and friends jailed or killed and supposedly trustworthy allies turn their backs. Freedom of any kind seems illusive and never within reach. Since her youth, Nafisi's family has taught her that you "don't air your dirty laundry in public." Her mother, a complicated but controlling, intelligent woman, took this to the extreme by making up stories and telling lies about their life instead of living with the truth. Indeed, most of the family follows the same pattern--living one life in the public eye while behind closed doors another life exists entirely, where refuge is often found in literature and stories. From an early age, Nafisi did not acknowledge the secrets but kept her thoughts in journals and diaries. In one such diary, Azar decided she needed to reveal her secrets, so she started a page with the heading, "Things I've Been Silent About." Like many Middle Eastern families, if they could afford it, the Nafisis would send their children out of the country to school as the school systems within their own world was often inadequate or limiting, especially for women. Nafisi attended schools in England, Switzerland and the United States and experimented with finding her voice, that of an educated young woman fighting against political and religious strictures that seemed not only unfair and restricting, but sometimes even horrifying: permitting marriage at age nine and stoning people to death. As a college student and a young woman teacher, Nafisi struggles to find meaning in her life and joins the fight to help set her country to rights--just plain human rights. Life is not easy for this author--the country is troubled, religion is in question, women's rights (or lack thereof] fluctuate, sexual molestation is almost accepted as normal, her family is dysfunctional at best, her father jailed, a failed first marriage. All are suffered in silence. These threads are woven together with crisp, honest writing that flows smoothly through history and realistically portrays the locations and events occurring in Nafisi's life. No longer willing to keep silent, she states, "Our personal fears and emotions are at times stronger than public danger. By keeping them secret, we allow them to remain malignant. You need to be able to articulate something if you want it to go away, and to do that, you must acknowledge that it exists." This book transcends most cultural barriers and the fine writing will appeal to all. by Rhonda Esakov for Story Circle Book Reviews reviewing books by, for, and about women

Nafisi has broken her silence -- and readers should rejoice

Published by Thriftbooks.com User , 13 years ago
Azar Nafisi, who will be best-known for the runaway success of her last book, Reading Lolita in Tehran: A Memoir in Books has produced that marvel, a flawless, crisply-written and meaningful memoir that more than accomplishes her stated goal, that of telling the recounting "those fragile intersections -- the places where moments in an individual's private life and personality resonate with and reflect a larger, more universal story." Nafisi is born into the Teheran of the 1940s and 50s, a world in which women such as her mother can receive an education and run for Parliament -- even as her father, a former mayor of Teheran, is imprisoned for unknown reasons and confined for years to a cell. But Nafisi, educated in Europe and the United States, where she joins the student movement of the 1960s and 1970s and becomes a vociferous opponent of the Shah's regime, returns to Iran after the revolution only to discovery the existence of a new kind of "black" totalitarianism -- clerical rule by Ayatollah Khomeini and his successors. It is against the backdrop of the dramatic events of these times -- coups, revolutions, civil war and war -- that Nafisi tells deeply personal stories of her life and those of her parents, two deeply incompatible people who damaged each other and, in their different ways, damaged their daughter. From an early age, Nafisi learns to take refuge in stories and literature; first, the tales that her father tells her from Persian history and mythology (her favorite character is Ferdowsi's Radabeh, from the Shahnameh chronicles) and later books that range from Annemarie Selinko's historical romance, Desiree, to Tolstoy, George Eliot and -- of course -- Nabokov. Perhaps, she muses, her family relied too much on stories and writing. "Other families talked, we wrote: what we felt or hoped for, our complaints -- we wrote all this, as if we could not bear to look into one another's eyes and just talk." Nafisi saw her home life with a mother with whom she argued bitterly and continually as a kind of prison; an early, unhappy first marriage, she records, was her bid for escape. Meanwhile, her father sought a different kind of escape in long-term romantic affairs with mistresses who for periods of time became part of the family circle. The turmoil that swirled around the family relationships was drama enough for most memoirs; in this case, it is accompanied by the backdrop of the turbulence of Iran itself, as Nafisi recalls seeing former friends and enemies (and relatives) end up executed by the Khomeini regime. She recounts her struggles to find purpose for herself without betraying her principles. Unusually for memoirs today, she is ruthlessly honest with her younger self and herself today, acknowledging her own frailties (as a result of childhood abuse by a Hajii Agha, a visiting cleric, she writes that she found it easier to confront the militia on the streets of Teheran than to sleep alone at night. Making the abuse itself more intol

Before "Reading Lolita In Tehran"

Published by Thriftbooks.com User , 13 years ago
Azar Nafisi is writing an earlier memoir about her dysfunctional family, especially her parents. Like Doris Lessing's "Alfred and Emily" and Julia Blackburn's "The Three of Us", this story is one of surviving one's parents. The author came from a mid-level political family and their is the backstory of Iranian history in the last century. The writing is crisp and riveting -- the abuse on numerous levels and her perception of her mother as an emotional controlling monster. After reading this book, the reader should turn to her tale about her later life : "Reading Lolita in Tehran".

Published by Thriftbooks.com User , 13 years ago
Though I very much enjoyed "Reading Lolita In Tehran," Nafisi's new book, "Things I've Been Silent About" surpasses her first on nearly every level. She still tells the story of her live in conjunction with the books and stories that matter most to her, but "Things I've Been Silent About" is a far more personal tale. You feel that she is letting you into a life she was hesitant to speak of before, and the revelations that take place in the telling are heartbreaking and endearing. Her struggle with her parents, her place between the two of them, is masterfully told. The hesitation she feels being there, as well as the favoritism she shows her father in many cases, closes any gaps one might have in relating to her story. Most children favor one family member over another at some point, and usually there is some sort of guilt that goes with that favoritism. I'm rambling a bit, but I can't help it. This book moved me in ways her first book did not. In the end I hardly know what to say, except that you should read it.
Trustpilot
Copyright © 2022 Thriftbooks.com Terms of Use | Privacy Policy | Do Not Sell My Personal Information | Accessibility Statement
ThriftBooks® and the ThriftBooks® logo are registered trademarks of Thrift Books Global, LLC