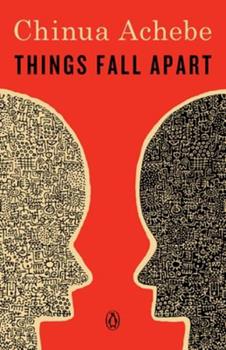 (Book #1 in the The African Trilogy Series)

"A true classic of world literature . . . A masterpiece that has inspired generations of writers in Nigeria, across Africa, and around the world." -- Barack Obama Nominated as one of America's best-loved novels by PBS's The Great American Read Things Fall Apart is the first of three novels in Chinua Achebe's critically acclaimed African Trilogy. It is a classic narrative about Africa's cataclysmic encounter with Europe as it establishes a colonial...

Wrong edition sent to me. Beware: what you see may not be what you get!

Published by R Parks , 2 years ago
Didn’t read yet. For my daughter’s ELA class.

Published by Thriftbooks.com User , 17 years ago
The more the reader thinks about Things Fall Apart, the more he becomes aware that the heart of a story is about the struggles of an individual and less about what is a compelling and unsentimental survey of Nigeria's Ibo culture just before the arrival of white settlers. The story's protagonist is Okonkwo, who at first appears to be a model warrior and self-made man who slowly discovers that the attributes he believed would serve him well as an adult instead breed a fear of failure and profound frustration. He is a complex and heavy-handed head of his household who is at once sympathetic and cruel. Most of the story is told before the actual appearance of the first white settlers, but their pending arrival hangs over the middle part of the book like a rain cloud. By the time it actually happens in the last 50 or so pages of the book, Okonkwo has been driven into exile, his life a shambles. He has only a slim hope of redemption, and that is shattered by the arrival of the settlers. Okonkwo's story is a relevant one even at a time when cultural and political imperialism has turned away from Africa toward the Middle East, Latin America, and Eastern Europe. But more important than its relevance is its artistry: it is a deceptively simple epic tale somehow packed into just over 200 pages, and one of the most impressive first novels on record. Don't miss it.

One of the Best Books Ever Written - Great African Novel!

Published by Thriftbooks.com User , 18 years ago
I was required to read this book in a college literature class and actually dreaded reading it because I really had no interest in Africa. After reading this book by the amazingly talented Chinua Achebe, I became more interested in Africa than I would have ever thought possible! Achebe has masterful skill in portraying African culture to the readers. He colors Africa in a magnificent yet somewhat tragic shade.I wrote an essay in college based on the Nigerian folktales in this book and received a 100% from my professor. This book has the power to touch lives and I recommend it to absolutely everybody on the planet. I have given my copy to my brother in hopes of educating one more person in this world on African culture. If you think this book is just for African Americans you're wrong... I am caucasian and this book has become my absolute favorite ever!Please buy this book and when you've read it pass it along to someone else. This book really enlightens people and makes the world more aware of the great and slightly overlooked continent of Africa - and in particular, Nigeria. I will travel to Africa someday solely because of this book!

Potentially deadly, so be careful.

Published by Thriftbooks.com User , 21 years ago
Because it's easy to read but hard to interpret, Achebe's masterwork has become a fixture thoughout secondary and higher education. Unfortunately, its current status as a "classic text" as well as a multicultural icon threatens to make it merely another institutional artifact rather than the genuinely provocative text it is capable of being. Achebe does not gloss over the apparently savage, cruel, sexist practices of the Ibo people before the arrival of the white missionaries. Yet students are quick to overlook these tensions in the narrative, preferring to go for the "platitudes" about imperialism that they know are expected of them in the classroom devoted to assuring "diversity" is in the curriculum. The other "tension" that is often overlooked is one outside the text: respecting the autonomy and identity of an African country by staying out of its affairs vs. intervening to bring an end to mass genocide (Rwanda), starvation (Ethiopia), and enslavement of children (Sudan). Why is it a "moral imperative" for the West to interfere in Kosovo but not in Rwanda? If these tensions are not confronted, the novel is a well-crafted folk tale about a tragic hero, and also another occasion for student apathy. Achebe himself has invited strong moral judgements about his text by applying the same to Conrad's "Heart of Darkness."

The Great American Read on PBS
Published by Beth Clark • August 24, 2018
The Great American Read is a PBS series that explores and celebrates the power of reading as the core of an ambitious digital, educational, and community outreach campaign designed to get the country reading and passionately talking about books. One hundred books, to be exact, so here are books 81–100 on the list!
Read Article