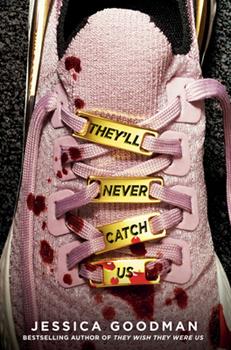 From rising star Jessica Goodman, author of They Wish They Were Us , comes a new fast-paced thriller about two sisters vying for the top spot on their cross-country team--the only way out of their stifling small town. But their dreams are suddenly thrown into peril when a new girl threatens to take away everything they've worked for... until she disappears. Stella and Ellie Steckler are only a year apart, but their different personalities make their...

Published by MizzyRed , 22 days ago
This book was interesting. I am a long distance walker venturing into jogging and so the bits with the training for long distance running intrigued me. Add in the disappearance of Mila and this was a book that I sped through fairly quickly. After finishing it, I had a new appreciation for the detail that was put into the cover with the lilac shoes. I must say, I did not see that end coming. I was totally thinking the Mila's death was caused by someone else. I also liked how, although Stella and Ellie were in competition with each other and had their own secrets that eventually came to light, they still had each other's backs when it counted most. I preferred that connection, more so than what the author tried to do with Mila and the sisters. That did seem a little quick how they both became such good friends with Mila. It probably would have been more believable if there had been more time between Mila's arrival and then disappearance. It was still a good book despite that and I liked the twist.

Published by Devin , 1 month ago
Even though Stella and Ellie Steckler are only a year apart in age, their relationship is a complicated one due to their vastly different personalities. Stella keeps to herself but is incredibly driven. Cross country is her passion and she will let nothing get in her way of being the best. Ellie is also a successful runner but she allows herself to have fun in addition to focusing on her running. She goes to parties with friends and has a life off of the cross country track. When new girl, Mila Keene arrives though, both Stella and Ellie's lives are turned upside down. Both sisters initially see Mila as a threat but Ellie starts to become drawn to Mila's warm personality and Stella isn't far behind in wanting to be close to Mila. The pressure is on for the girls with college scouts and regionals. Then one day Mila goes out for a run and doesn't return and the Steckler sisters are top of the suspect list. I really enjoyed this one. It was very suspenseful and the writing kept me interested. I didn't want to put it down! I felt there were some aspects that weren't completely explained in the end but it was still a good read.
Copyright © 2020 Thriftbooks.com Terms of Use | Privacy Policy | Do Not Sell My Personal Information | Accessibility Statement
ThriftBooks® and the ThriftBooks® logo are registered trademarks of Thrift Books Global, LLC