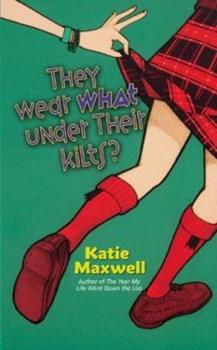 They Wear What Under Their Kilts

As part of a school project, Emily spends a month working on her uncle's sheep farm in Scotland . . . and meeting droolworthy Scottish guys!

Published by Thriftbooks.com User , 13 years ago
YES!! PLZ BUY THIS ENTIRE SERIES!! I WAS ACTUALLY LAUGHING OUT LOUD!! EMILY IS HILARIOUS. DEF. BUY THIS BOOK, ILL GIVE THE ORDER, B/C I READ THEM OUT OF ORDER AND WAS WAY CONFUSED. 1. THE YEAR MY LIFE WENT DOWN THE LOO 2. THEY WEAR WHAT UNDER THEIR KILTS 3. WHATS FRENCH FOR "EW"? 4. THE TAMING OF THE DREW 5. LIFE, LOVE, AND THE PURSUIT OF HOTTIES TOTALLY WORTH IT!! I SWEAR!!!

Published by Thriftbooks.com User , 17 years ago
This second book in the "Emily" series does not disappoint. Emily is spending a couple weeks in Scotland, ostensibly for a school project, but really in search of hotties in kilts. This book maybe had even more laugh-out-loud moments than "Loo". Emily learning the basics of sheep-herding had me laughing hysterically. Creepy Aidan is out of the picture now, and Emily is competing with her shy friend, Holly, for the attentions of a Schottie (Scottish hottie). His name is Rory (not the real spelling, but Emily trying to spell it is another highlight of the book). Her friends Devon and Fang make appearances in this book, too, along with her e-mails from her friend back home, Dru. This is another great book by Katie Maxwell that any teen girl will love. I strongly recommend you read the first book, "The Year My Life Went Down the Loo" first.

OHMYCROD!!! This book is soooooo funny!!

Published by Thriftbooks.com User , 17 years ago
Allow me to just state right up front that I not only am not a YA, but I am over the hill and halfway down the other side. I picked this book up because I love Scotland and the cover tickled me (you should have seen the look on the face of the young male cashier in the grocery store). And I LOVED this book! It had me laughing right out loud in practically every chapter. I'm sure I appreciated it even more than my teenage niece will. Bravo to Katie Maxwell for having an uber coolio, rapier wit and ability to create utterly charming and lovable characters. I'm off now to buy "The Year My Life Went Down the Loo."

Hilarious Addition to the Series

Published by Thriftbooks.com User , 17 years ago
Emily is back. Only this time she's not running around her new home away from home known as Jolly Old England, trying to catch an underwear ghost, but rather she's in Scotland. You see, she needs a month of Work Experience for school, and lucky her, her and her best friend in England, Holly, have gotten the opportunity to help out on her Aunt and Uncle's farm. Of course, within 5 minutes of arriving, Emily has already spotted a hunky Schottie (Scottish Hottie), named Ruaraidh. Unfortunately, Holly has spotted him as well, and now they have decided to have a contest called "Who Can Snog Him First." But between being dragged through sheep poop and mud, and experiencing all types of embarrassing moments in front of the Schottie, Emily is realizing that getting him isn't going to be so easy, and that Holly, shy little Holly, may actually have a shot at winning the contest.Katie Maxwell is back as the voice of the absolutely hilarious Emily, whom has already taken us on a crazy journey through England, and now Scotland. Emily is a character whom fans of the previous book, THE YEAR MY LIFE WENT DOWN THE LOO, will be able to grow up, and change with. Experiencing good moments, and extremely embarrassing moments in life, just like every teenage girl on the planet. A must-have book, as Emily's antics can not be missed. And neither can her very poignant views on romance.Erika Sorocco
Copyright © 2022 Thriftbooks.com Terms of Use | Privacy Policy | Do Not Sell My Personal Information | Accessibility Statement
ThriftBooks® and the ThriftBooks® logo are registered trademarks of Thrift Books Global, LLC