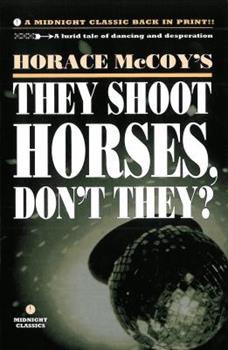 The depression of the 1930s led people to desperate measures to survive. The marathon dance craze, which flourished at that time, seemed a simple way for people to earn extra money - dancing the hours away for cash. But the underside of that craze was filled with a competition and violence unknown to most ballrooms.

A classic in the study of human suffering!

Published by Thriftbooks.com User , 16 years ago
They Shoot Horses depicts the suffering and misery of depression era America. The plot centers around a dance marathon in which a variety of pathetic contestants enter in hopes of taking away the cash prize. Needless to say, they take nothing away. The marathon takes away their dignity and self-respect; leaving each contestant exposed by the torment that life has heaped upon each individual. They Shoot Horses is an excellent text for the study of character development. The major and minor characters are all equally important. No one is superior. All are equal in the misery of life. How one handles the misery determines their future. Some will say Horses ends on a tragic note. I disagree. Animals are shot to be put out of their misery. Are we not the higher form of animal existence? I applaud Gloria's strenghth and Robert's compassion.

Existential Masterpiece of the Depression

Published by Thriftbooks.com User , 17 years ago
When all is said and done, it's McCoy's HORSES that, for me, so beautifully reflects the darkest side of the Depression days in the U.S., even more so than Steinbeck's wonderful GRAPES OF WRATH. McCoy gets to the very core of human desperation and misery, a cutthroat atmosphere where people will resort to ANYTHING just to survive. The dance marathon itself becomes an odd microcosm of society, totally self-contained, as if the world outside of its doors does not exist. I have not seen the film because I am afraid it will undermine the strong visions the book created in my mind, particularly the "derby" sections, where one person is playing the horse and the other the jockey, racing around the center ring in the dance floor. That is one of the most surreal visions any novel has ever planted in my brain and McCoy conveys the action and drama of these "races" so phenomenally well. In light of such strange imagery, to call this a "crime novel" is to rob it of its broader vision, its existential outlook on the modern social order and its warped priorities. More to the point, there's little to no crime here. Someone gets shot. That's the extent of it. There's no investigation, no suspense. So I suspect crime aficionados might be bored out of their skull with this one. I have the hardback first-edition, published by Simon & Schuster back when it was a fledgling company, and its too bad no one will give this its clothbound due and elevate it above the status of the "penny pocketbook". They did include it with Library of America's Crime Noir set but again, that forces it within a certain genre to which it does not belong. Although McCoy's success in the US was marginal at best, the French existentialists loved this novel and McCoy was hailed as a genius there and in other parts of Europe as well. At least he got some degree of recognition during his own lifetime.

Published by Thriftbooks.com User , 20 years ago
Though better known in it's somewhat milder film version, this is a brisk, brutal crime novel in which a Depression dance marathon becomes a metaphor for the harsh and unrelenting grind of real life. Couple #22, Robert Syverton and Gloria Beatty, have come to Hollywood to break into the movie business, but having had no luck, end up in a spectacle that's like something out of the Roman Coliseum.By novel's end the couples have been dancing for almost 900 hours, with only a ten minute break every two hours. The 144 couples who started have dwindled down to twenty. Many dropped out early, but many more have been eliminated in the frantic derby races that were instituted to draw in crowds. When dancers merely pass out, which they frequently do, they are awakened with smelling salts or ice baths and pushed right back onto the floor. But times are so bad that Robert has actually put on five pounds during the ordeal--meals are supplied for free--and most of the other contestants have gained weight too.He's content to keep going, hoping that he'll be "discovered" by one of the film world glitterati attending the marathon or that he can use the prize money to direct a picture of his own. But Gloria is completely fatalistic : This whole business is a merry-go-round. When we get out of here we're right back where we started.She tries convincing one of the other dancers, who is pregnant, to get an abortion, for the good of the baby, and she continually tells Robert that she wishes she were dead. Suffice it to say she gets her wish.We tend to want to view our grandparents as having led sheltered lives, unaware of all the oh-so-tough realities that we face so honestly today. This almost sadistically frank pulp fiction from 1935 will cure anyone of the delusion that earlier generations didn't know the score. With murder, incest, abortion, and the like generously added to a plot about people entertaining themselves by watching the misery of others, it's like one of these eliminationist "reality" television shows (Survivor, Big Brother, etc.) as conceived by the creative team of Thomas Hobbes and Charles Darwin. These lives are indeed nasty, brutish, and short. It doesn't make for a pretty story, but you have to admire the zeal and energy with which Horace McCoy drives his point home.GRADE : B+

a Depression era classic of deadbeats and down-and-outs

Published by Thriftbooks.com User , 20 years ago
"They Shoot Horses, Don't They" is a unique piece of literature. It's a condensed (The film version, starring Jane Fonda, of this novel does not accurately portray the bleakness of the setting and the desperation of the characters. Horace McCoy gives the reader no sunshine or hope. But such was life for millions during the Depression.Bottom line: a condensed masterpiece that packs a punch.

Published by Thriftbooks.com User , 22 years ago
Although this book was written in the 1930s, it speaks to today's ennui and loss of meaning. It is still fresh and will stand the test of time, much like Nathaniel West's work. The story describes two drifting people who meet on the streets of Hollywood and find themselves in a crazy dance marathon contest. They initially wanted to meet Hollywood producers and stars through the marathon, but then just go on and on, hour after hour, day after day, dancing in perpetual motion, not knowing why they continue. Perhaps it's for the $1000 prize money, or perhaps it's just because they're in a rut, trying to escape their desparate, empty lives. The contest is just a crass racket the promoters have dreamed up to pull in cash, and the contestants are almost like animals in a great big cage who can't escape, while the audience comes night after night to gawk and laugh at them. The basic cruelty of the contest is driven home in scenes depicting nightly "derby races," where the exhausted contestants must race around a track for 15 minutes, with the last place couple being eliminated. Bodies fall, tempers flare, and fists fly while the audience gasps and thrills to the show. In the end, we discover an enormous existential void in our two contestants, which leads to the only logical conclusion. This book is packed with sexual tension as well and should give today's slick writers pause. There's nothing new under the sun, kids. Previous generations weren't as stupid as you might think. In fact, this very fine work outstrips 99% of today's novels in its subtlety and originality.
Copyright © 2022 Thriftbooks.com Terms of Use | Privacy Policy | Do Not Sell My Personal Information | Accessibility Statement
ThriftBooks® and the ThriftBooks® logo are registered trademarks of Thrift Books Global, LLC