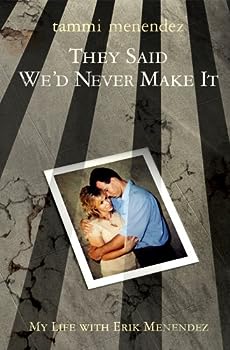 They Said We'd Never Make It: My Life With Erik Menendez

This biography by Tammi Menendez describes her life with Erik Menandez. This description may be from another edition of this product.

I Pray They'll Always Make It

Published by Thriftbooks.com User , 16 years ago
During the Larry King show I was not only impressed by courageous Tammy but also by the strong and optimistic voice of Erik Menendez. After all he has gone through, it's hard to believe that he could still sound so confident and hopeful and that was the reason why I wanted to read "They Say We'd Never Make It". This very detailed, heart-wrenching, and well written book (what a shame though that so many typos were left in, especially the inappropriate use of the apostrophe) was not only a page turner for me, but a valuable experience. I grew in understanding why someone could possibly marry a prisoner who was in jail for life without parole and grew angry and disturbed to read about the unfairness and often humiliating and cruel treatments prisoners have to endure in prison. I read the book while visiting my native country Holland, where I went to "Keukenhof," the well-known paradise of tulips and other flowering bulbs. While I took in this colorful splendor, I kept thinking of Tammy's book and when I took a rest on a bench in front of pure white flowers, imagine my surprise to see printed on the name tag "Talia", the name of Tammy's youngest daughter. I left the book in Amsterdam as a must read for my family and upon my return I ordered another copy which I just lent to a friend as I feel this is an important book to read.

Published by Thriftbooks.com User , 17 years ago
Larry King called it a "good read." I call it an "excellent read!" Like probably a lot of people, I had concerns about buying a book whose profits might go to a murderer, let alone written by someone who had married a prisoner. Talk about dysfunction! However, my curiosity got the best of me, and I decided to read it based on Larry King's interview and review. No one condones the murder of the Menendez parents - not Erik, his wife nor Lyle. This isn't a book about condemnation and blame. It's about redemption, introspection and the healing power of love. Have you have ever wondered if you just had a certain amount of money all your problems would be resolved, this book will make you take a second look. It will teach you to value not what is material but rather what is spiritual and gives meaning to our existence on this planet. It taught me not to assume anything about anyone without more information. I have complete respect for Tammi. She is a star! I also admire the way Erik has made the best of an unfortunate situation. The Menendez parents didn't deserve to die, but they are the ones who should have been sent to prison. You can kill a person in more ways than one -- by breaking a person's spirit and sense of dignity. The book is about respecting the innate value of every human being. We don't need to go to Iraq to see prisoner abuse - just look in our own backyards. I've always thought that the death penalty is an easy way out for perpetrators of heinous crime. Now, I am convinced of it! This book will make you think! I highly recommend it without reservation.

Published by Thriftbooks.com User , 17 years ago
This book was very good. Tammi tells us what life is like behind bars for Eric. and how hard it is to be married to someone locked up for life. this book is a easy read with lots of info on prison life as well as her life as a mother. I think this book was very well written. anyone who has had intrest in the menendez case would like this book.
Trustpilot
Copyright © 2022 Thriftbooks.com Terms of Use | Privacy Policy | Do Not Sell My Personal Information | Cookie Preferences | Accessibility Statement
ThriftBooks® and the ThriftBooks® logo are registered trademarks of Thrift Books Global, LLC