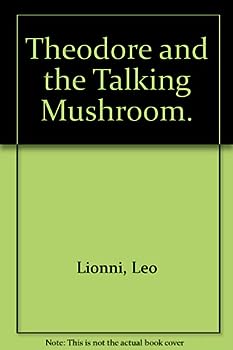 THEODRE AND THE TALKING MUSHRO

This description may be from another edition of this product. From four-time Caldecott Honor-winner Leo Lionni, this classic fable is a quirky conversation-starter about honesty. Theodore, a little mouse, lives with a lizard that can grow a new tail, a frog that...

Published by Thriftbooks.com User , 12 years ago
Originally published in 1971, Theodore and the Talking Mushroom is a classic that has a surprise, thought-provoking ending, rather than a happy one. Told in simple terms and shown with likeable images, each of Theodore's friends talks about their talents: lizard can grow a new tail when he loses one; frog can swim underwater, and turtle can close like a box. But the only talent Theodore the mouse has is he is able to run. His friends laugh at him, for that is no talent. One day, Theodore discovers a blue mushroom and is startled by a strange noise, "Quirp!" After he confirms the mushroom really can't talk, he has an idea. He returns to his friends and fabricates a story about how he has found the Mushroom of Truth and has learned to understand its language. Theodore takes them to the mushroom. Impressed, his friends claim Theodore should be venerated above all other animals. They make him a crown and everyone treats him like royalty. Until one day, on a trip to the other side of the mountains, they discover a whole field of blue "quirping" mushrooms. His friends turn on him, calling him a liar. Theodore runs away, never to see his friends again. The ending took away my breath and makes it a perfect time to engage a discussion about lies: why people tell them, how they feel, and how that makes them appear to others. If your young child experiences a lie, either his/her own or a classmate's, this is a perfect book to draw out a deeper understanding of what has occurred and how that makes the child feel. Author/artist Leo Lionni is a recipient of the Society of Illustrators Lifetime Achievement Award and four-time Caldecott Award honoree for Inch by Inch, Frederick, Alexander the Wind-Up Mouse, and Swimmy. Reviewed by Susan L. Roberts

Published by Thriftbooks.com User , 12 years ago
A little mouse lives with talented friends: the lizard can grow a new tail, the turtle can close up. What can the little mouse do, other than run? Theodore wants to impress his friends so he tells a whopper - and trouble ensues in this believable picturebook tale.

Published by Thriftbooks.com User , 20 years ago
If you are looking for another Swimmy or Frederick, or even Alexander, this is NOT it. The usual cute torn-paper mouse illustrations are here, but this is a weird story, and not a very happy one, either. At first I had to wonder what kind of mushroom Leonni was on when he wrote this. The story is about a mouse who finds a mushroom that "talks," or so he thinks, at least at first. Anyway, the cat`s out of the bag, and everyone thinks Theodore must be great because he discovered a mushroom that speaks, moreover, he is the only one who can understand it. Thus begins his dilemma.I suppose this tale is a good starting point for discussions about verifying ones facts, speaking before thinking, getting carried away, the dilemma of when to speak out the truth despite the terrible outcome and accepting the consequences of one`s actions. Maybe this is not so weird, after all: just not so light-hearted as the aforementioned stories. Theodore learns an important lesson, albeit a rueful one, and the book is not devoid of humour.
Copyright © 2020 Thriftbooks.com Terms of Use | Privacy Policy | Do Not Sell My Personal Information | Accessibility Statement
ThriftBooks® and the ThriftBooks® logo are registered trademarks of Thrift Books Global, LLC