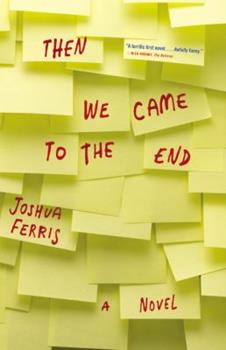 Then We Came to the End

The National Book Award finalist and debut novel by the bestselling author of The Dinner Party "A readymade classic of the office-novel genre. . . . A truly affecting novel about work, trust, love, and loneliness." -- Seattle Times No one knows us quite the same way as the men and women who sit beside us in department meetings and crowd the office refrigerator with their labeled yogurts. Every office is a family of sorts, and the ad agency Joshua...

What is "Then We Came To The End" trying to say?

Published by Thriftbooks.com User , 15 years ago
Despite widespread critical acclaim, this book has gotten mixed reviews from customers. I understand it, and people who hated it aren't wrong. I'd like to address these criticisms later, so please stick with me. The positive reviews I've read about "Then We Came To The End" are mostly spot-on -- but without giving it away, they don't consistently convey WHY this amusing, touching and ultimately tender book soars - at least for me. It's the ending. The last 20 pages of Joshua Ferris's book twisted and turned me in every direction. But it's THE VERY LAST LINE -- (DON'T CHEAT) -- that catapulted me into the universe with the most glorious twist of all. Many writers searching for something to leave behind that feels ironic or profound -- I'm sorry -- in my view, they just don't know how to end their books. I say this as a consumer who's a voracious reader. Their last pages feel quietly pretentious -- or a little too contemplative or optimistic. Even great literature - especially prize-winning literature - can be so tortuous in construction or over-reaching in their efforts to convey some grand message -- that they feel like work, with sentences so mind-numbing that you need a dictionary and a level of concentration akin to taking a bar exam. "Then We Came To The End" may not be considered great literature, but it's euphoric. It's wonderful. It underscores that nebulous "thing" that makes the office dull and robotic -- but also vital and vibrant, essential to our lives. The book makes me question, admire and dismiss -- all at once -- why I put up with so much " s***," why I find great satisfaction in my work on one day and why I hate everything the next. The masochistic, sadistic and triumphal feelings I have about work -- and about the "back stories" of my colleagues around me -- there's something weirdly magnetic about all of it -- even as I complain, complain, complain. In my view, the simplicity (or difficulty) associated with "Then We Came To The End" really depends on whether the material hits you in a way that's familiar and funny, not dull or indulgent. It can do both. And as others have stated, the author's use of the first person plural "we" -- in every chapter but one -- can't be overstated. It's miraculous when it works -- because it's so difficult to pull off without fumbling or confusing the reader. When it does work (as it did for me) - when it's infused with content so beguiling and familiar -- you're no longer aware of the author's writing style, which should be the dream achievement of all great writers. Reading becomes effortless as the clock melts away. Joshua Ferris recently said in an interview -- and at a recent book signing -- that the thing intriguing about every office is this: Even if you don't know everyone very well or at all, EVERYONE has an OPINION about YOU and everyone else. This may feel like a universal nugget of common sense, but you're not really aware of it until it unfurls between the

Like a dark chocolate treat wrapped around your favorite filling

Published by Thriftbooks.com User , 15 years ago
My review title reflects one of my ultimate pleasures in life. Another is discovering an outstanding work of fiction and this is my favorite of 2007 so far. It is chock full of flavorful characters, with a middle passage brimming with sadness and pathos, and just overflowing with humor. It melts with pungent dialog, is shot through with ringing tones of truth and real experiences, with a strong finale building to a totally satisfying conclusion (so rare these days when authors seem totally unable to write good endings - don't they teach that skill in school?). I will be sure to savor it more slowly next time.

just became one of my favorite books.

Published by Thriftbooks.com User , 15 years ago
For this to be touted as a comedy, people go in expecting to laugh until their sides hurt. Sure, the book is undeniably funny, but it has so much heart. I laughed at parts. Some parts made me cry. Some parts made me appreciate my wife more in knowing that I have someone who cares about me more than anyone, and I her. The book had me gasping when a certain clown appeared.' Truly, I never wanted this book to end. To say it changed my life would be an understatement. For some reason, this book really hit home for me. I've never worked in an office, but I've worked in lenty of jobs where everyone wants to quit and do other things, follow their dreams, but don't have the guts to just leave. Can't recommend this book enough. I seriously felt like I was in the group of characters in the book. Hanging out with them, working with them, gossiping with them...and genuinely sad at the end. I miss them already.

Published by Thriftbooks.com User , 15 years ago
An office dalliance leads to impending maternity. A coworker mourns her child's death. A corporate best-girl refuses to face issues of her own mortality until she finds herself turning from it minute by minute. A shattered individual shares the Emerson quotes that keep his quirkily heroic persona together with whomever he sees may be similarly troubled. Another tries to make his way free of friendship, turning away from even admitting witness of non-official office events. Meanwhile, the rest of the office gets together to kill time, compete for first-discovery rights on information, try to make sense of the world through group consensus, and keep their creative saws sharpened in the dot-com downturn. I love Then We Came to the End. It is a wonderfully sympathetic novel of work relationships. Just what should "work" mean to a person? What attachments, what level of attachments, what kind of caring, is normal on the job? And isn't it almost too painfully obvious how frail and silly anyone we know is, really? This is a wonderfully real take on office life, exhibiting a refreshingly well-grounded, sympathetic view of multiple office characters. The narration exhibits a kind of sympathetic ambivalence in its examination of a working social group. In a world where so many colorful characters are written off as "crazy," Ferris patiently gets to motives. The narrator, written in first-person plural, thinks and feels the same as thinking people assessing confusing situations in this modern world. One can feel admiration and jealousy at once, one can cop to the noble and the prurient. It's a fine examination of what people think and do; and what it means to take action; what it means to witness and to participate. [...]

Published by Thriftbooks.com User , 15 years ago
No matter how much we love the established names, the Roths, the Pynchons, the McCarthy's, nothing is quite so exciting as a new author. With that excitement, however, comes the peril of disappointment. Ferris does not disappoint. One gets the feeling upon reading this book that a new but permanent voice is being added to the American literary scene, and that we are lucky to have a book like this on our shelves. Yes, it is written in the first-person plural, from the perspective of an ad agency, and yes it is laugh-out-loud funny. But the style is no gimmick--it reinforces the subtle cultural commentary offered by the book: a message leavened by the humor and delivered with the lightest of touches. This book is the full package. Ignore it at your own risk.

Then We Came to the End Mentions in Our Blog 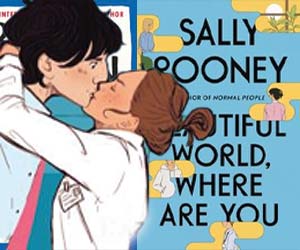 Our TBR piles may already be weighing down our bedside tables, but that doesn’t stop us from browsing (and buying!) new books! Here are fifteen exciting September releases available for preorder, along with suggestions for similar books you can pick up right now.