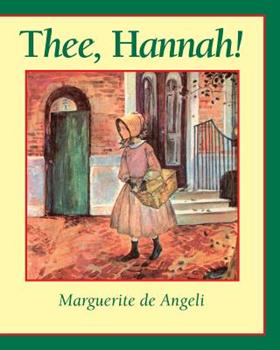 Catch a glimpse of pre-Civil War Quaker life as Hannah and her family go to Meeting and to market, host a gathering of Friends, and enjoy ice skating and other pastimes. Nine-year-old Hannah finds it hard to wear a plain bonnet that pinches her ears and a plain dress with no lace Will Hannah ever understand the value of plain dress and learn to be content as a Friend? 100 Pages.

Published by Thriftbooks.com User , 13 years ago
Every child I know who has read it has found it both funny and captivating. If you buy it, the whole concept of saying "thee" all the time is pretty funny and your kids might imitate it for a while and want you to play along. It's fun! But the book tugs on the heart as well. Especially, for this African-American family, the part where Hannah renders aid and assistance to the runaway slave has always been particularly moving and a great conversation starter. I loved it as a child, bought it for my nieces and nephews, then for my own child and now for my grandkids. I loaned my last copy to a friend whose 2nd grade child had just learned about slavery and was having trouble dealing with how America could have accepted it. Well, not everyone accepted it and Marguerite de Angeli brings this point home in her typically gentle, unobtrusive manner. But I never got my book back so here I am, buying it again. It is well worth every penny and is a great addition to any family's permanent collection. I highly recommend it.

Lasting Power and Imagery for a Lifetime

Published by Thriftbooks.com User , 18 years ago
One of my favorite childhood books, I didn't even understand the runaway slave aspect until much later. What did always resonate, however, was the struggle that Hannah goes through to balance her desire for material possessions and beautiful things, with her parents' and her faith's wishes that teach her to be simple and rely on what is in her heart for her self worth. Her inner battles with envy over her more worldly friends is something every young girl can relate to. Hannah has weaknesses and she fails but she is always forgiven and her conscience is always at work - an excellent, thoughtful role model without being preachy. The reader struggles with Hannah to do the right thing and make the right choices. Plus the illustrations will stay with the reader a lifetime - Margeurite D'Angeli is a two time Caldecott honoree so words and pictures synthesize in a beautiful rhythm. I cannot recommend this book highly enough - it is a delight.

Published by Thriftbooks.com User , 20 years ago
Hannah -- Nanny to her family -- is an 8 year old Quaker girl, living in Pennsylvania in the days of the the Underground Railroad. She loves pretty things -- ribbons or flowers on bonnets; pantaloons with lacy edges; colorful sashes wrapped around dresses. Of course, as plain folks, her family doesn't approve of these non-functional, showy things.The language is old fashioned -- the family speaks in the old Friends way of using "thee" when addressing family members. Hannah gets into numerous mishaps, and after every one, her parents gently explain to her why she need not have frills to be valuable.Hannah's mother says,"'Thee must wait till thee has learned that the color of the dress doesn't matter, and that pantalettes and sashes do not matter. Thee must learn what thy bonnet stands for. Thee must learn Quaker ways.' Mother patted Hannah's shoulder and told her to sit and think about it."Hannah thought and thought, but she couldn't quite understand what it all meant. 'Why can't Sally and I wear things the big girls wear? And what does my plain, ugly bonnet stand for?' she wondered. But she was unhappy to have made Mother sad, and when she went downstairs, she hoped she could remember to do everything just as Father wished."But of course, there is still another temptation or two to surrender to, and the consequences to deal with. Hannah doesn't really understand until the very end of the book, when she is called upon by a runaway slave, whose little boy is sick, to get help. Hannah does this, and much later the woman explains to her how she knew Hannah could be trusted (having to do with the wearing of a plain bonnet.) The story, written in the 1940's, is based on stories the young Marguerite de Angeli (b. 1889, d. 1987) heard from an 80-year-old Friend of hers, Hannah Severn. Illustrations are quaint, as is the dialogue. A very nice book for Quaker adults or children (kids who today may have some similar contemporary questions about clothing, computers, and other longed for things.) I'm not sure we have as good an answer for simplicity as Hannah found.

We Are Not Alone

Published by Thriftbooks.com User , 21 years ago
Hannah was a little Quaker girl who admired something that was considered taboo according to Quaker beliefs. That something was vanity, which was symbolized by a bonnet that her neighbor wore. It had pretty ribbons unlike the plain bonnets that the Quakers wore. The plot of the story does not become clear until near the end of the book. She realizes why it is so important for Quakers to put aside vanity. Hannah learns the true meaning of being a Quaker when she gets to assist runaway slaves who have become disconnected from the Underground Railroad trail. The slaves are a woman and her baby. The woman sees Hannah and beckons her to come to her hiding place in an alley. Hannah then tells her parents about the woman who is in the alley. That night, her parents and the other Friends find the woman and take her to the place where she is supposed to make her connection and join her husband. At the end of the story, this slave tells Hannah that she knew Hannah would help her because of the bonnet she was wearing. Quakers were known for their plain bonnets. This is how Hannah learned the true meaning of helping, which is what the Quaker religion is based on. I found this story to be as relevant today as it was when it was first written. As we still struggle in this country for freedoms, we must not forget that people are placed in positions to help us. The struggle for freedom does not belong to one single race. We accomplish this act by working together. Further, I found the book to be very sensitive, touching, and beautiful. Through the simplicity of the characters, their ideologies, and the author's surprising ending, the book stands out as an extraordinary and artistic literary work. MayfromOK@webtv.net
Copyright © 2020 Thriftbooks.com Terms of Use | Privacy Policy | Do Not Sell My Personal Information | Accessibility Statement
ThriftBooks® and the ThriftBooks® logo are registered trademarks of Thrift Books Global, LLC