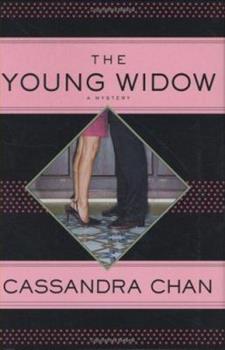 (Book #1 in the Phillip Bethancourt and Jack Gibbons Mysteries Series)

A CHARMING WIDOW WITH A TROUBLING HISTORY As if by magic, Annette Berowne seems capable of dazzling men from the moment she meets them. But when Annette becomes the primary suspect in her husband's poisoning death, she arouses entirely different feelings. Now some men feel sorry for her while others are convinced she's guilty. PROVIDES TWO DETECTIVES WITH A MYSTERY OF SEDUCTION AND MURDER. Jack Gibbons is a by-the-book, rising star at Scotland Yard...

A funny, entertaining mystery (albeit in a restrained, English kind of way)

Published by Thriftbooks.com User , 13 years ago
"Annette Berowne had a sweet, heart-shaped face. She had honey-blond hair and wide brown eyes. She was not beautiful, and certainly not glamorous, but only Phillip Bethancourt noticed that." So begins Cassandra Chan's debut novel, The Young Widow, in her debut mystery series of Phillip Bethancourt and Jack Gibbons mysteries (clearly this book is a CLW review because of the author and not the main characters). But before discussing Annette Berowne, it is important to know about Gibbons and Bethancourt. Bethancourt and Gibbons could not be more different. Everything comes easily to Phillip Bethancourt, a young and wealthy Englishman with a model girlfriend and posh apartment to match his high standard of living. Jack Gibbons, on the other hand, is more of an everyman--an ambitious detective sergeant at Scotland Yard, Gibbons has his eye on more important things than parties and women: he's watching for a career-making case. Despite their differences the two men strike an easy friendship, largely because of Bethancourt's interest in all things criminal and his knack for helping Gibbons with his more, shall we say, complex cases. Annette Berowne, meanwhile, is the not beautiful nor glamorous widow of the murder victim in Gibbons' latest case. From the start, Annette Berowne seems like the obvious suspect, a young woman married to a man who could be her father usually is. Especially when that woman has been married to two other older men. Men who also died under unique circumstances. However, as Jack and Phillip soon realize, Annette is not the only one who would benefit from Berowne's death. In fact, the small town near the family estate is ripe with suspects, as is the family itself. Still, the investigation seems to perpetually turn back to the enchanting Annette Berowne. No matter how desperately Gibbons tries to find a more likely suspect. As Bethancourt observes his friend's, indeed everyone's, growing infatuation with the young widow his initial detachment becomes worry as Bethancourt begins to wonder if his friend could be walking down a path that will shatter his ambitious career before it's really begun. The Young Widow is what I would call a quiet book. Chan's prose is witty and sharp, but it is also subtle. The book is rich with humor, but it is the restrained kind so usually associated with the English. The writing here cannot be devoured, rather it has to relished--readers have to linger. Both myself and my mother found the characters and the plot to be thoroughly enjoyable even with slight confusion at the beginning due to an influx of many characters' names over a short number of pages. One of the particular strong suits of the writing here is Chan's use of dialogue where she mixes humor, plot, and character interaction in perfect combination. One of my favorite excerpts will hopefully illustrate that point with a conversation between Bethancourt and his young nephew: "I've got to dress," said Bethancourt, stubbing out his

Published by Thriftbooks.com User , 15 years ago
As an Agatha Christie, Dorothy Sayers fan I am delighted to have found another writer in the same genre. I do hope there will be many more from this author. So many modern crime writers seem to need to wallow in gory forensic details which make for very unpleasant reading. It is good to find writing that doesn't pander to the current obsession for the deeply nasty. As a Brit, I did notice that it was written by an American, but felt very flattered at her evident love of all things British.

Be transported to the English Countryside

Published by Thriftbooks.com User , 16 years ago
Smashing, fun read! The Young Widow transports you right into the English Countryside. Character development is outstanding - I felt like I knew each of them personally by the time the mystery had been solved. Hope we're going to see more of Phillip Bethancourt in the future! A great first novel for Ms. Chan!

The most fun I've had reading a mystery in years ...

Published by Thriftbooks.com User , 16 years ago
What a wonderful, fun read. Escape to a world that is a cross between that of Peter Wimsey and Bridget Jones with a dash of Clue thrown in. I was torn between dashing through this to see who poisoned wealthy Geoffery Berowne in the study of estate and taking it in slow bites to relish each character and scene. I chose the latter and enjoyed my stay in the English countryside, despite the cloud of the clever murder hanging overhead. I felt as frustrated as aristocratic amateur sleuth Phillip Bethancourt and his friend Scotland yard detective Jack Gibbons as various family members and servants seemed likely suspects, and then they didn't. I look forward to more from this writer. (BTW, I see Hugh Grant as Bethancourt if it should ever hit the screen.)
Trustpilot
Copyright © 2022 Thriftbooks.com Terms of Use | Privacy Policy | Do Not Sell My Personal Information | Accessibility Statement
ThriftBooks® and the ThriftBooks® logo are registered trademarks of Thrift Books Global, LLC