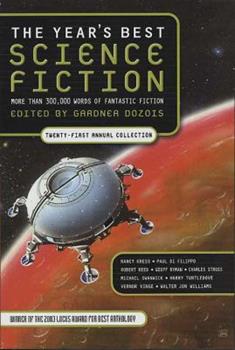 The stories in this collection imaginatively take readers far across the universe, into the very core of their beings, to the realm of the Gods, and to the moment just after now. Included are the works of masters of the form and the bright new talents of tomorrow. This book is a valuable resource in addition to serving as the single best place in the universe to find stories that stir the imagination and the heart.

Sci-Fi short stories at their best

Published by Thriftbooks.com User , 16 years ago
This series sets a high standard for science fiction short story writing and this collection is no exception. You will find a variety of styles and approaches in these stories and I find them a great way to discover writers I have never heard of.

An excellent collection, as always.

Published by Thriftbooks.com User , 16 years ago
I'm not sure I would classify every story in this collection as "the best" of the year, but that's in no way intended as a slight against what is contained in this collection. The book contains a large and varied collection of science fiction stories, each unique and varied in both scope and style. There were no stories in this perennially excellent book, but there were some particular standouts for me. Ironically, the very first story was my favorite of all of them. "Off On A Starship" by William Barton, despite the undertones of an adolescent boy coming of age sexually during his wild and fascinating adventures in space, Barton's tone and style reminded me very much of the classic juvenile adventures of Robert Heinlein. This story is far more mature than Heinlein's YA books, but it's definitely got the same sense of wonder, the captures the youthful imagination that all of us have, regardless of our age. For me, this was by far the most enjoyable story in the book. Other highlights for me include the absurdly funny "Rogue Farm" by Charles Stross, where he takes the future notion of "evolution" to a wildly funny extreme; "The Ice" by Stephen Popkes, which is an intriguing, moving, and hauntingly realistic take on one possible way that the issue of cloning might manifest itself in the not too distant future; and the gut-wrenchingly sad tale, "The Fluted Girl" by Paolo Bacigalupi, in which a child is enslaved by a cruel woman who has turned her into a sick and twisted for of "art." As a lifetime science fiction reader and having recently become a writer, I love reading stories that touch upon something within me, and/or open my eyes up to an issue that we either face today or will likely face in the coming years. This collection has stories that do all of those things. It's a book with a little something for everybody. - Gregory Bernard Banks, author of "Phoenix Tales: Stories of Death & Life"

More great SF than you can shake a stick at

Published by Thriftbooks.com User , 17 years ago
The annual collection of the best of science fiction edited by Gardner Dozois (until recently, the editor of Asimov's magazine) is always eagerly awaited. This year's, the 21st edition of it, was of special interest to me, as it has another "Company" story by Kage Baker. So I just had to read it. While I am normally more of a fantasy fan then a science fiction one, I am finding more of an interest in science fiction than I used to have. This collection, however, looked very imposing. Twenty-nine stories in all, over 600 pages. Would I be able to get through it, or would the Baker story be the only thing of interest for me? The fact that I'm reviewing it should tell you that I found it at least acceptable, if not brilliant. However, I can tell you that I enjoyed almost every story in the book. Sure, there are some that are better than others (Terry Bisson's story, "Dear Abbey," is decent, but not really my cup of tea), but I can't say that any of them didn't deserve to be in the collection. Surprisingly, there wasn't much of what I would consider "hard" science fiction, where the story depends more on the science than on the characters, which made the collection even better for me. While there were many strong stories in this collection, I'd have to say that the best ones were Kage Baker's "Welcome to Olympus, Mr. Hearst", Steven Popkes' "The Ice", and Paul Di Filippo's "And the Dish Ran Away With the Spoon." As stated earlier, Baker's story is another Company story, this time with the immortals Joseph and Lewis trying to get William Randolph Hearst to agree to do some storage for some of the Company's rescued items. Joseph has orders to negotiate other things with Hearst that Lewis isn't even aware of, but Hearst drives a hard bargain. He won't take anything less than the immortality that Joseph and the rest of the Company operatives have. The problem is, the immortality solution does not work for anybody older than 5 or 6 years old. In his negotiations, Joseph makes a startling discovery about Hearst that will have far-reaching consequences. This story is simply a delight, and it's longer than a lot of Baker's shorts. There's also a sub-plot of a signed Rudolph Valentino script being stolen from Lewis' room, and their efforts to get it back. With a mixture of real and imagined characters (Greta Garbo and Clark Gable make an appearance, along with Hearst), the characterization and the humour is nothing short of marvelous. It also adds a bit to the backstory of Baker's universe, including adding another piece to the future that we've only seen snippets of. I adored this story. "The Ice" is another winner for Popkes, whose "A Fable of Savior and Reptile" in Hartwell's Year's Best Fantasy 3 was one of the best of that collection. In "The Ice," we're in the near future, and somebody has successfully cloned hockey player Gordie Howe. This does not come out until a reporter digs up the truth when the kid is in high school. The

Published by Thriftbooks.com User , 17 years ago
Off On a Starship, William Barton. Raunchy account of hormonal `60's teenager accidentally whisked away to distant yet eerily familiar points unknown. Clever parody of old pulp sci-fi, complete with crazy cosmic ending. B It's All True, John Kessel. 1940's cinema legend wooed by time traveling 2048 talent scout. Sizzling narrative doused by lukewarm ending. B Rogue Farm, Charles Stoss. Future farmer harassed by bizarre genetically engineered squatter(s?). B The Ice, Steven Popkes. Does a man's past determine his future? This question takes on new complexity for a clone of Gordie Howe in this richly textured character study. A Ej-Es, Nancy Kress. For the strangely afflicted colonists on a remote planet, the line is sharp between disease and cure...but which is which? B The Bellman, John Varley. Serial killer of pregnant women pursued by pregnant cop on the extensively colonized Moon. Gore galore. B The Bear's Baby, Judith Moffett. Environmentally correct aliens clean up Mother Earth, but play dirty with humans. Snappy narrative, intriguing plot. A Calling Your Name, Howard Waldrop. Droll widower pops into an alternate reality where everything's the same, except completely different. Comically composed, elegantly ended. A June Sixteenth at Anna's, Kristine Kathryn Rusch. Melancholy widower deteriorates watching his wife in a holographic history. Melancholy. C The Green Leopard Plague, Walter Jon Williams. Intrepid widower, this one a brilliant academic, postulates a new world order after some mayhem over a breakthrough in bioengineering. Long tunnel, no cheese. C The Fluted Girl, Paolo Bacigalupi. In a far future fiefdom, servants are cruelly and bizarrely bioengineered at the whim of their lord. One victim plots an escape-of sorts. B Dead Worlds, Jack Skillingstead. Man sacrifices his life for science, then has a tough life. A poignant and philosophical love story, remarkably compact. A+ King Dragon, Michael Swawnick. Curious mix of SF and fantasy as a downed fighter jet's nasty computer lords it over of a village full of elves. A Singletons in Love, Paul Melko. Group consciousness makes falling in love problematic for future humans. C Anomalous Structures of My Dreams, M. Shayne Bell. Stop whining! A hospital patient dying of AIDS gets a roomie who's really sick. B The Cookie Monster, Vernon Vinge. Zzzz. Joe Steele, Harry Turtledove. Stalin-type beats FDR in 1932 and all hell breaks loose. B Birth Days, Geoff Ryman. Recessive homosexuality gene turns out to be dominant. Dubious Darwinian premise merely prop-for-ganda. D Awake in the Night, John C. Wright. Eons hence, Earth languishes in perpetual darkness, the light of civilization a mere flicker as well. A man battles inscrutable monsters and the very weight of time in this haunting and surreal tale of adventure. A+ The Long Way Home, James Van Pelt. Mankind's re
Copyright © 2022 Thriftbooks.com Terms of Use | Privacy Policy | Do Not Sell My Personal Information | Accessibility Statement
ThriftBooks® and the ThriftBooks® logo are registered trademarks of Thrift Books Global, LLC