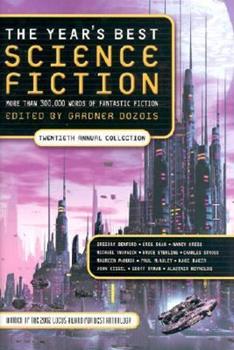 (Book #20 in the The Year's Best Science Fiction Series)

Published by Thriftbooks.com User , 19 years ago
I consider this THE definitive anthology for science fiction short stories, and I make it a point to get it every year. There are always some stories that don't necessarily blow my socks off, but I can appreciate why they were selected, and value the variety the editor always includes in these volumes. There are some quiet stories, some far-ranging space adventures, a novella or two, and always something for everyone. Before each story, the editor gives a little synopsis of the writer's career, and never fails to mention some other works that you can pursue if you like the author's style. That's how I've found some of my favorite sci-fi authors. Definitely worth getting.

Published by Thriftbooks.com User , 19 years ago
The twentieth edition of what annually is one of the best anthologies is a strong collection of short stories that showcases the top tales of the year. The contributions come mostly from United States, Great Britain, and Australia and run the gamut of the genre. As usual Gardner Dozois provides a superb introduction that gives the perspective and condition of the genre. This time though much of the critical world claim the genre is dead, no earth-shattering innovation occurred, and magazines have suffered losses, Mr. Dozois shows that SF remains a viable powerful entity. Each tale is well written as expected from an anthology packaged by the award winning Mr. Dozois who leaves no stone (magazine or book?) unturned in his quest to provide THE YEAR'S BEST SCIENCE FICTION at least the shorts.Harriet Klausner

A handful of greatness, a boatload of mediocrity.

Published by Thriftbooks.com User , 19 years ago
This collection is a resource both for readers and writers of contemporary science fiction. Emerging and established writers are assembled with an emphasis on the diverse range of styles and forms being utilized. From brief, nearly mainstream literary shorts to sprawling pulpy novellas, there is something to appeal and to repel nearly every taste. This book serves as a window into the personal tastes of Mr. Dozois, who offers a critical survey of the year in movies to the year in reprints, to the state of the genre publishing industry. In addition to any "writer's market" books, this collection provides insight into what writing is selling at most of the professional sci-fi markets. If you don't have the money to subscribe to every magazine or website you are considering submitting to, or more likely, don't have the time to read absolutely everything from each magazine, this book is a good alternative and a worthy aid when deciding which market best suits your length, style, etc. Finally, if the 26 stories within leave you wanting more (admittedly, Dozois seems to have included a disproportionate number of stories from his own periodical), Dozois offers a daunting list of honorable mentions, some of which he discusses briefly in his introductory summation. As for the stories themselves:"Breathmoss" is a fairly well told coming of age tale of a girl in a patiently detailed exotic world. "The Most Famous Little Girl In The World" has a distinctly literary tone, and despite its mixture of post 9/11 paranoia and confusing possibly-alien-caused apocalyptic scenarios, it remains solidly character driven. The first person narrative restricts our understanding of this world in the near future (the story spans decades detailing the interaction of two cousins who dislike each other), which may or may not be a good thing."The Passenger" hints at issues of class disparity without being heavy-handed, and uses "hard science" (i.e. descriptions of technology) to further the plot rather than just create a "futuristic" atmosphere. Well done."The Political Officer" features several macho characters, and intrigue based on competing ideas of who has legitimate control of the ship and the mission. Its not surprising something goes terribly wrong. Despite the author's efforts to redeem them, none of the characters are likeable...and the lengthy "tension-building" scenes seem largely extraneous. "Lambing Season" is tightly written, and at barely 10 pages its concise style is reflected in its brevity. Molly Glass has honed her literary style quite well, and she presents a rancher's encounter with an alien with fine realism and emotional resonance. Wonderful."Coelacanths" is set in the far future, where humans, despite all their adaptations and technological accouterments, struggle to survive let alone understand the multi-dimensional world that has evolved around them. Other characters emerge, ranging from adventurous/fatalistic sub-atomic dust motes to s

Published by Thriftbooks.com User , 19 years ago
"Slow Life" starts off well, with a small group of explorers collecting data on Titan. However, when one of the characters is contacted by an alien collective intelligence in her sleep, the story turns sour, and despite a decent sense of humor, it comes to a silly overly excited conclusion. "A Flock Of Birds" has a great atmosphere, with a handful of individuals wandering the barren landscape of an America after a devastating war. The careful attention to his tasks as a birder parallel his devotion to keeping a fellow survivor alive. The returning flocks of birds become an obvious yet still affecting metaphor against the images of a New York City marathon from a video that is played multiple times over the course of the story. That in ten years, a birder could forget what a pigeon looks like seems ridiculous, but one could argue that this shows the true depth of his psychological damage, which was carefully masked until this point."The Potter Of Bones" has an interesting story set in an alternate matriarchal past; however, the narration is very intrusive (e.g. "This story is about...," "At this point, the story needs to describe...," disjointed transitions, indications that this is a work of non-fiction cobbled together from artifacts by some of the characters, followed by lengthy fictive exchanges and descriptions, etc), and (with the exception of some clever debates between the potter and the Goddess in her dreams) the dialogue is reminiscent of the stilted exchanges of characters in a video game. For instance, the most common response people think or say to the red-furred potter is "Hah!" "The Whisper of Disks" is another strong offering taken from Interzone, taking place through multiple generations of an eccentric family's existence. Though the protagonist becomes one of the most powerful women alive, she is unable to discover much about her past, but through a series of vignettes across time, we see that she intuits what she cannot know about her genetic history. "The Hotel At Harlan's Landing" is a somewhat entertaining but easily forgettable tale of the supernatural which seems closer to the genre of horror than that of sci-fi. "The Millennium Party" could probably be called flash fiction, being as it is so short. It is more a skeletal idea put to paper rather than an actual story. "Turquoise Days" completes the collection, following the shortest story with what appears to be the longest. Published as a chapbook, it seems unnecessarily long, though it has a few memorable passages.
Trustpilot
Copyright © 2022 Thriftbooks.com Terms of Use | Privacy Policy | Do Not Sell My Personal Information | Cookie Preferences | Accessibility Statement
ThriftBooks® and the ThriftBooks® logo are registered trademarks of Thrift Books Global, LLC