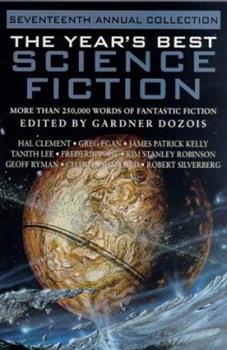 (Book #17 in the The Year's Best Science Fiction Series)

In science fiction's early days, stories often looked past 1984 to the year 2000 as the far unknowable future. Here now, on the brink of the twenty-first century, the future remains as distant and as unknowable as ever . . . and science fiction stories continue to explore it with delightful results: Collected in this anthology are such imaginative gems as: "The Wedding Album" by David Marusek. In a high-tech future, the line between reality and simulation...

Published by Thriftbooks.com User , 22 years ago
Amazingly, David Marusek has stolen *another* collection; "The Wedding Album" alone is worth the price of admission here. (I think I have borrowed that phrase from Dozois!)_TYBSF_ is easily the most value for the SciFi buck you can get in any given year. Dozois' customary "Year in Review" summation serves double duty: entertainment and shopping guide. The story choice is always superb, and it would be hard to say enough about the sheer page volume -- the access to several worthy novellas in a single volume is nice.Actually, I think this is a slightly down year for the stories themselves. There are a lot of strong old-school pens included (legacy SciFi, I like to call it), but the stories by the Big Names tend to visit ground already trod upon; compare Egan's maddeningly distant and well-realized future (not completely removed, I think, from his novel, _Diaspora_) and you might see what I mean.And the Marusek! Oh, the Marusek!If you have made it to this review, you would likely be quite satisfied with the book. Highly recommended.

Published by Thriftbooks.com User , 22 years ago
The only trouble with a year's best anthology is that it invariably includes some stories you don't like-and leaves out some you thought were great. Such are the vagaries of taste. That said, Gardner Dozois's seventeenth annual collection of the Years Best Science Fiction offers plenty of worthy things to read. Many of the stories feature highly imaginative settings-Robert Reed's "Winemaster" comes to mind at once, as does Kage Baker's "Son Observe the Time." And there are compelling stories from well-known writers: James Patrick Kelly uses childhood and cold war fears while Michael Swanwick integrates dinosaur fantasies with human frailty. But perhaps one of the most important thing this anthology does is introduce readers to newer and less well-known writers. Chris Lawson's "Written in Blood" impressed me when I first read it in Asimov's-such a quirky turn on what we know of DNA. "The Dragon of Pripyat" by Karl Schroeder gives us hint of a future just around the corner. And Richard Wadholm's "Green Tea" shows what a sure hand can do when combining a vivid imagination with very old concepts of love and revenge. His world includes wondrous elements chemistry hasn't yet found; his people cut commodities deals in the Bright Matter Exchange and live in worlds along the French Violet. But the part of the story that breaks my heart every time is when the narrator wonders what his friend Frances saw in him: "A man of honesty beneath the lies, compassion beneath the avarice? You will find this most amusing-because I could not bear to let her down, I would have been that man." Read this collection. Be overwhelmed by the great stories in it, and argue with your friends about the ones you think don't qualify. And mark the new writers: you're going to want to read more from them.

One of the best volumes ever

Published by Thriftbooks.com User , 22 years ago
I've been reading Dozois's annual collection of science fiction since the 3rd volume, and every year I am amazed at the consistent quality of the stories he selects. Every story is always enjoyable, and every volume always has a few gems that usually turn to be the best science fiction I read in a given year, regardless of length. This year is no exception.I think my favorite thing about this series is the shear size, which allows Dozois to include several novella-length stories, while still having room for a good mix of shorter length fiction as well. This year's volume includes several novellas that are not to be missed.My favorite story is the lead-off novella, "The Wedding Album" by David Marusek. It is set in the same future as his incredible "We Were Out of Our Minds With Joy" and I would be hard-pressed to say which story I prefer. "The Wedding Album" is the story of a young couple's marriage and future life, as explored through the viewpoint of virtual simulations of themselves taken on the day of their marriage. The story is both entertaining and poignant, and Marusek's vision of the future is dazzling.Also not to be missed is the final novella in this volume, Kage Baker's "Son Observe the Time." Set in the same timeline as her novels In the Garden of Iden and Sky Coyote, this story stands on its own, and I think is the best writing Baker has produced to date. In it, representatives of a future company are in San Francisco just before the 1906 earthquake. They cannot change the past, but they are attempting to salvage as much art and knowledge as they can before the quake. Unfortunately, some of the company's own distant past emerges to cause problems even as the earthquake approaches... A fantastic story.This rest of the stories in this volume are just as worth reading. I especially enjoyed the stories by Geoff Ryman, Eleanor Arnason, Robert Reed, Greg Egan, and James Patrick Kelly.

Published by Thriftbooks.com User , 22 years ago
The Year's Best Science Fiction 17th Annual Collection is a masterpiece. Edited by the famous gardner Dozois, he is a longtime editor of Asimov's Science Fiction, and the editor of many science fiction anthologies. Each story is wonderfully written and is great science fiction, ranging from the not so distant future...To thousands of years into the future.
Trustpilot
Copyright © 2022 Thriftbooks.com Terms of Use | Privacy Policy | Do Not Sell My Personal Information | Cookie Preferences | Accessibility Statement
ThriftBooks® and the ThriftBooks® logo are registered trademarks of Thrift Books Global, LLC