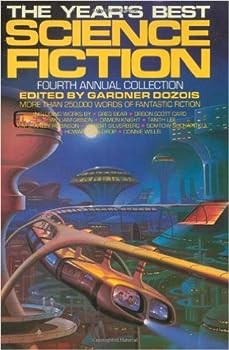 (Book #4 in the The Year's Best Science Fiction Series)

Pages clean and unmarked. Shelf wear from time on shelf like you would see on a major chain. Immediate shipping. This description may be from another edition of this product.

Published by Thriftbooks.com User , 19 years ago
This volume is rare but can be found. Well worth the effort.1. "R & R" by Lucius Shepard. Can a story be too well written? Formidable story but florid prose: weary American soldiers fighting a war of attrition in future Central America get serious battle fatigue. I got serious metaphor fatigue. B2. "Hatrack River" by Orson Scott Card. Does a seemingly innocent pioneer girl merely see the future...or shape it? Thought-provoking, sometimes violent story laced with mysticism set in 1805 Pennsylvania. B3. "Strangers in Paradise" by Damon Knight. Man visits enchanting Earth-colonized planet only to discover its dirty little secret. A4. "Pretty Boy Crossover" by Pat Cadigan. Confused and rebellious future teenagers literally go digital instead of getting pierced or tattooed. Cadigan's portrait of virtual reality is ahead of its time, well framed in a compelling story. A5. "Against Babylon" by Robert Silverberg. Intrepid, exhausted pilot fights raging brush fires in Los Angeles as alien space ships land with intentions unknown. A real page turner! A6. "Fiddling for Waterbuffloes" by Somtow Sucharitkul. Too high on the ambiguity scale for me. C-7. "Into Gold" by Tanith Lee. Roman warlord falls for sultry witch in a remote corner of the crumbling Empire. Haunting prose creates an aura of impending doom. B+8. "Sea Change" by Scott Baker. Loveable boy in future Venice is drawn to mysterious sea creatures. Is this a good thing or a bad thing? C9. "Covenant of Souls" by Michael Swanick. Despite the religious motif, this one, set in nuclear war-torn America, doesn't have a prayer. C- 10. "The Pure Product" by John Kessel. Alien tourists blend in with humans on a visit to the Midwest and do a whole lot more than take pictures. Absolutely chilling. A+11. "Grave Angels" by Richard Kearns. Simultaneously lyrical and gruesome tale about life, death, and the sometimes grim consequences of getting what you wish for. A-12. "Tangents" by Greg Bear. Boy with unique mathematical insight makes very hard contact with life in the Fourth Dimension. B13. "The Beautiful and the Sublime" by Bruce Sterling. My favorite story in the book. The author's own description is perfect: "(A) Wodehousian romantic comedy about the death of the scientific method..." Lots of unforgettable characters and dialog; fantastic, ironical plot totally counter to my expectations. A+14. "Tattoos" by Jack Dann. On the other hand, this one is kind of predictable. C-15. "Night Moves" by Tim Powers. Dreams, reality, madness and memory converge on a sad and lonely soul in New York. Complex, well plotted, thought-provoking. B16. "The Prisoner of Chillon" by James Patrick Kelly. Zzzz17. "Chance" by Connie Willis. Depressed New England woman married to brutish professor gets a chance to clean up her past when she returns to her undergraduate campus. C18. "And So to Bed" by Harry Turtledove. This story, written in Elizabethan English, is so hard to read I didn'

Fantastic Survey of the Field!

Published by Thriftbooks.com User , 20 years ago
Dozois is, and has long been, one of the best editors and anthologizers in all of SF. The anthology ranges over the many different sub-genres of Science Fiction, and I therefore cannot say I enjoyed all of his stories; nevertheless, all were well-written, and some of the stories were among the best I've ever read. I strongly recommend this and any other of Dozois' "Year's Best..." series.
Trustpilot
Copyright © 2022 Thriftbooks.com Terms of Use | Privacy Policy | Do Not Sell My Personal Information | Accessibility Statement
ThriftBooks® and the ThriftBooks® logo are registered trademarks of Thrift Books Global, LLC