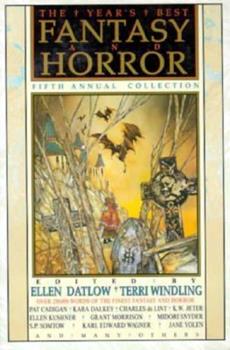 This acclaimed series, winner of numerous World Fantasy Awards, continues its tradition of excellence with scores of short stories from such writers as Michael Bishop, Edward Byrant, Angela Carter, Terry Lamsley, Gabriel Garcia Marquex, A.R. Morlan, Robert Silverberg, Michael Swanwick, Jane Yolen and many others. Supplementing the stories are the editors' invaluable overviews of the year in fantastic fiction, Edward Bryant's witty roundup of the year's...

Published by Thriftbooks.com User , 20 years ago
In their twelfth annual survey, Datlow and Windling have assembled a rewarding collection of genre (and extra-genre) fiction from English language sources of all kinds from 1998, with a little poetry thrown in as well. In a format based on Dozois's science fiction anthologies, Datlow and Windling's series has become an annual "event" for lovers of nonrealistic short fiction. The editors are open to just about anything and everything, as long as it has significant fantasy or horror elements, but they are more likely to reprint material by women writers, or about female characters. As far as biases go, that's not a bad one to have: some of the best fantasists working today are women.The editors look at mainstream magazines like "The New Yorker" and "Ms." -- both of which had strong stories chosen for this book. From "The New Yorker" they selected Stephen King's "That Feeling, You Can Only Say What It Is in French," which in 20 tightly-written pages gives the reader the entire life of a woman who may be getting precognitive flashes about the crash of the plane she and her husband are on, or who may simply be fantasizing the crash as a death wish. I knew this woman completely by the end of the story (whose title refers to déjà vu). The "Ms." story was Lisa Goldstein's "The Phantasma of Q-----," with a moment of magic realism passing so quickly it's hard to catch. It is a strength of this series that it covers work in mainstream, genre and academic/small press sources. A number of British and Australian magazines, anthologies and collections provide selections, with two superior tales well worth reading. The best thing in the book (and saved for last) is the superb modern fairy tale by A. S. Byatt, "Cold" -- sitting in a warm library, I was shivering at the frozen world depicted. A beautifully textured story, the best I've read in several years. It came from Byatt's collection, "Fire and Ice." Christopher Harman's "Jackdaw Jack" (from Ghosts and Scholars, a UK little magazine) is the best shocker in the anthology. Its pieces fall into place like a well-wrought jigsaw, and the end left me numb. Among the other stories is an unclassifiable gem by Ray Vukcevich, "By the Time We Get to Uranus" (from the anthology, Imagination Fully Dilated). In the story's surreal world, a person's body slowly develops an astronaut's suit from the feet up, and eventually the person floats off into space. When this happens to a man's wife, he's concerned that his suit isn't developing as fast as hers, as they can't leave together. A metaphor for what separates the sexes these days, the story works and then some. The stories I detailed here are my favorites, but others will find others they like as much or better. Some motifs of the book are hispanic magic realism, foreign fantasy in translation, and stories that are just very strange. I'm not a fast reader, and this long book took me a year and a half to finish. The extensive prefaces (in roman numerals) r

Published by Thriftbooks.com User , 22 years ago
I am working my way back through all of the Datlow/Windling annuals, and although I love all of them, this collection is definitely outshines some of its colleagues (such as the third edition, which is the least thrilling of the ones I have read so far). Many of the stories will cling to your memory, and the scope of genres is commendable. The editors have found works form many different countries and languages and brought them all together into a very good volume. My favorite entries include "The Ragthorn" a truly frightening story about scholarship, information and resurrection; "Our Lady of the Harbour" Charles de Lint's Newford version of the little Mermaid; "Call Home" a truly scary story about a little girl and the man who doesn't molest her; "At the End of the Day" a disturbing and surreal narrative about endings; "The Poisoned Story" an upside down retelling of Cinderella in Puerto Rico by my compatriot Rosario Ferre; "The Peony Lantern" a Japanese ghost story and "The Witch of Wilton Falls" about human monsters and adapting to unusual circumstances. If you have read other Datlow/Windling anthologies and you want to buy other ones, get this one first. If you have never read these anthologies, this is a great place to start.

Published by Thriftbooks.com User , 22 years ago
Good collection of stories, though there seems to be a bit more horror than usual, and the inclusion of a couple of stories in which I was hard-pressed to find any fantastic or horrific elements at all. As usual, the poetry selections are the weakest in the bunch, with the delightful exception of Marisa de los Santos' "Wiglaf". My favorites from this collection: "That Feeling, You Can Only Say What It Is in French" by Stephen King [I'm not a big King fan, but i was pleasantly surprised by this excellent little tale]; "The Faerie Cony-catcher" by Delia Sherman [its ending was not unexpected, but delightful all the same]; and "Cold" by A.S. Byatt [typical Byatt. for those unaquainted with A.S. Byatt, I can only say.. beautiful]. Terri Windling's Fantasy Summation for 1998 is useful as always.The following is a complete listing of authors and their included works: Kelly Link, "Travels with the Snow Queen; Steve Duffy, "Running Dogs"; Marisa de los Santos, "Wiglaf"; Susanna Clarke, "Mrs Mabb"; Rick Kennett, "Due West"; Catharine Savage Brosman, "Kokopelli"; Bruce Glassco, "Taking Loup"; Sara Douglass, "The Evil Within"; Larry Fontenot, "Wile E. Coyote's Lament"; Mary Rosenblum, "The Rainmaker"; Michael Marshall Smith, "A Place to Stay"; Lisa Goldstein, "The Fantasma of Q___"; Ralph Salisbury, "Hoopa, the White Deer Dance"; Stephen King, "That Feeling, You Can Only Say What It Is in French; Karen Joy Fowler, "The Travails"; Terry Lamsley, "Suburban Blight"; Dennis Etchison, "Inside the Cackle Factory"; Kurahashi Yumiko, "The House of the Black Cat"; John Kessel, "Every Angel is Terrifying"; Neil Gaiman, "Shoggoth's Old Peculiar"; Lawrence Osgood, "Great Sedna"; Sylvia Brownrigg, "The Bird Chick"; Mark W. Tiedmann, "Psyche"; Carol Ann Duffy, "Mrs. Beast"; Jane Yolen, "Become A Warrior"; Norman Partridge, "Blackbirds"; Nick DiChario, "Carp Man"; Delia Sherman, "The Faerie Cony-catcher"; Zan Ross, "At the River of Crocodiles"; Steven Millhauser, "Clair de Lune"; Jorge Luis Borges, "The Rose of Paracelsus"; Peter Straub, "Mr. Clubb and Mr. Cuff"; Michael Blumlein, "Revenge"; Holly Prado, "The Tall, Upheaving One"; Patricia A. McKillip, "Oak Hill"; Christopher Harman, "Jackdaw Jack"; Sarah Corbett, "Dark Moon"; Ellen Kushner, "The Death of the Duke"; Judy Budnitz, "Hershel"; Ray Vukcevich, "By the Time We Get to Uranus"; Kelly Link, "The Specialist's Hat"; Charles de Lint, "Twa Corbies"; Terry Dowling, "Jenny Come to Play"; Ilan Stavans, "Blimunda"; Chana Bloch, "Mrs. Dumpty"; A. S. Byatt, "Cold".

Published by Thriftbooks.com User , 23 years ago
624 pages packed with the best of the best! It's like having all of your best friends at one party! Guaranteed sleepless nights. This book is a must for anyone who enjoys good horror. I also recommend, Steward's--"Tales of Dirt, Danger, and Darkness" a new fresh, up and coming author.

Published by Thriftbooks.com User , 23 years ago
This edition is the best I've read yet! All the stories had some sort of magic element. They were all smart and well written.
Trustpilot
Copyright © 2022 Thriftbooks.com Terms of Use | Privacy Policy | Do Not Sell My Personal Information | Cookie Preferences | Accessibility Statement
ThriftBooks® and the ThriftBooks® logo are registered trademarks of Thrift Books Global, LLC