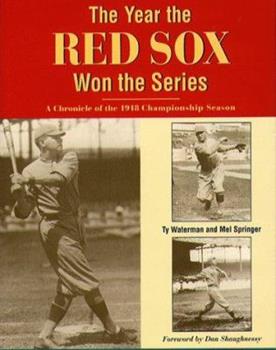 The Year The Red Sox Won The Series: A Chronicle of the 1918 Championship Season

by Mel Springer and Ty Waterman

An illustrated chronicle of the 1918 Championship Season which details the players, games and events that lead to the Red Sox victory.

Published by Thriftbooks.com User , 20 years ago
But in 1918, the Sox won. They really, really won. This well researched book makes me fell like I was there, 83 years ago, following the REd Sox daily, the same way I do now. Difference is, they win it and this is not good fiction, it is great non-fiction. What Ken Burns did for baseball history, Ty Waterman does for the 1918 Red Sox.Another interesting thing about this book is the news clips which is how you, as a reader, follow along with the season. The interesting part is not just the information from long ago, but how a ball club is written about back in 1918, and how it differs today. Sure the players had "issues" back then, but now days we can get bogged down on the importance of player's personal problems and the effect that has on the team. Looking foward to digesting the next Ty Waterman fact filled book.

Published by Thriftbooks.com User , 21 years ago
No team in professional sports offers a full scale opera with each game more than my beloved Boston Red Sox. All Red Sox and baseball fans know the trials, tribulations, and horror that surrounds this team, and with it Boston, and all of New England. Buckner in '86, Torrez in '78, Bill Lee's junk pitch to Tony Perez in game 7 of '75, the collapse in 72, the could have been of '67, the should have been of '48, Enos Slaughter in '45...the Red Sox have sustained their share of horrific luck since Harry Frazee dealt the Babe to New York in 1919...Few fans remember, or realize, that the Red Sox dominated baseball for the first 20 years of the past century. They had great pitchers from Cy Young to "Smoky" Joe Wood, to the Babe, and hall of famers Harry Hooper, Tris Speaker, Young, the Babe... yes, the Sox had it all, and it all culminated in 1918, the last time the Babe-led Sox won the World Series.Waterman's book is a delightful piece of Americana, complete with old tyme sketches, photos, box scores, standings, and everything else that made 1918 what it was- a simpler time in baseball. The stories, from the trade of Speaker to the Indians to the many showcasing the Babe's probelms but undeniable charisma and popularity, to that of Harry Hooper's fight against MLB that lasted all of his life, are fascinating and riviting. The newspaper writers were more than that in those days- they became part of the saga, as well.This book is a remarkable historical document that fans of baseball, no less those of the Red Sox, will appreciate. Many of the day's brightest stars are mentioned, and it hearkens back to a day when to play baseball was a privledge, not a job. ..and while the 1918 Red Sox were a dysfunctional lot, they played the game hard, and loved what they did. The book, cartoons, and stories from the writers clearly show this. Baseball today can learn more than a thing or 2 from the 1918 Red Sox and baseball of that era. A delightful and informative read.

The Pain of Being a Red Sox Fan

Published by Thriftbooks.com User , 22 years ago
Nothing but the pain and despair of being a true Bosox fan could ever prepare an author like it must have for Mr. Waterman. The book was a bright read about a very different game in a very different America. As much a chronicle of the era as baseball and the Red Sox themselves. A first class study of the despair of every Red Six fan! I beleieve the Braves won the 1960 CDE Title!

Published by Thriftbooks.com User , 22 years ago
Great reading !! The book takes you back to that glorious Sox summer of 1918, and as ALL Sox fans are aware of, the last World Championship season. It chronicles the entire season from start to finish. You can also see how the writing style of the sportswriters was quite different than it is nowadays. Also captured in the book are various cartoon illustrations that are no longer a part of the current day sports page, but quite popular back then. This book should be must reading for all Sox fans.

Published by Thriftbooks.com User , 23 years ago
It's too bad that since the last Boston World Series Championship, the New York Yankees have only won about 22. (Heh Ty - who won the CDE Championship in 1961? Give up? - The Yankees!!!)
Trustpilot
Copyright © 2022 Thriftbooks.com Terms of Use | Privacy Policy | Do Not Sell My Personal Information | Accessibility Statement
ThriftBooks® and the ThriftBooks® logo are registered trademarks of Thrift Books Global, LLC