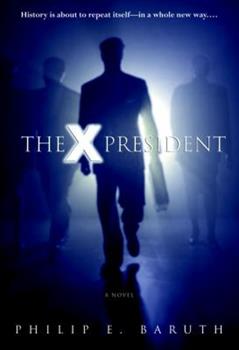 A masterful blend of political satire and edgy social commentary, here is a wildly entertaining trip through recent American history and into the impending future. An incisive look at how we love and hate our political leaders, and how they love and hate us back, The X President touches the very heart of what it means to be president--and what a president means to America. It is the year 2055 and America is entangled in a devastating world war--and...

Published by Thriftbooks.com User , 18 years ago
History wrapped in what might be called sci-fi, but really isn't. Baruth has done a marvelous job on this comedy, mystery, sci-fi, thriller. The United States of the late 21st Century faces a crisis that can be resolved only if former President Bill Clinton, then 109 years old, does things a bit differently ---- 60 years earlier. Clinton's hand-picked biographer is dragooned into a time travel adventure that is marvelously inventive and informative to boot. Yes, the novel has a political cast, but as one blurb writer said, even if you hated Bill Clinton, it's still an enjoyable story. And it truly is. For a leisure time read, put this one on your list.Jerry

Published by Thriftbooks.com User , 18 years ago
I bought this book after reading the enticing review in the NYTimes. I wasn't disappointed. There aren't many good, intelligent adventure stories out there that have an interesting woman as a main character. I have to confess that I've always found George Stephanopoulos sexy, so his part worked great for me, too. This is a very funny book, but I think what kept me going was the quirky, surprising plot (and the nostalgia trips). Mr. Baruth knows how to ask great "what if" questions, and his answers are really brilliant (often scary) alternate realities. It kind of reminded me of Neal Stephenson's Snow Crash, which is another fast-moving fantasy adventure I would recommend. They're both kind of brainy books, but page-turners at the same time.

Published by Thriftbooks.com User , 18 years ago
This novel is more thriller than sci-fi, but the science fiction elements (time travel, cool futuristic technologies) are lots of fun. The X President is also a hilarious political satire that somehow manages to please Clinton-lovers and Clinton-haters at the same time. I'm an admirer of Clinton, but a friend of mine who hates Clinton was roaring with laughter when I read him the great scene involving the interactive virtual reality of the "White House coffee" event. Baruth's characterization of the ancient BC is so good you'll want those scenes to keep rolling. Incredibly, the portrait of young BC (yBC) is, if anything, even better. Baruth's novel combines edge-of-the-seat action scenes with brilliant vintage historical moments (Cassius Clay, for example, is featured) and laugh-out-loud funny dialogue. So, why should you get this book? First, it's guaranteed to crack you up. Second, the time travel adventure is exciting (well-plotted and full of moments that make you go "Wow!" and "Oh no!" and "Ah-ha!"). The third reason is that the Clinton stuff is just a blast. Baruth has read everything about the man, perspectives across the spectrum, and has selected the juiciest, tastiest morsels for the reader to chew on. As a bonus, the writing is stylistically fine, a real pleasure for us literary types, and yet not stuffy; so the effect is a stylish but wild ride rather than either a merely stylish ride (think Updike) or a wild ride in a racer that is actually rusting out and about to crumble but you can overlook that because the ride (i.e., the story) is so much fun (think Grisham or Clancy). Enjoy!

Published by Thriftbooks.com User , 18 years ago
My friends say I'm a political junkie and I guess it's true. I loved this book! I was at the bookstore waiting for my girlfriend to finish shopping and I just picked this off the rack because of the cover. After about ten pages I got into it and actually had to buy the book! I was still reading it in bed but had to control my laughter not to wake my girlfriend. I finished the book during breakfast. Anyway, all of this is to point out not only do I have a girlfriend(!) but this book is great if you're into politics and also have a sense of humor. I'm glad to see there are others here who liked it. The professional reviews posted here seem accurate to me, except the point about the "vague ending." If you know American politics, you won't consider the ending vague but very pointed and an attack against the pundits who act like they can predict the future.

Published by Thriftbooks.com User , 18 years ago
This is a remarkable book that seamlessly combines science fiction, Clinton-era political commentary, literary theory and trenchant observation on the ethos of politics and pool. Bill Clinton is beautifully rendered (in nearly every sense of the term). This richly imagined book also works as a compelling piece of science fiction, a knowing comment on the nature of biography, and a primer on the norms and nuances of bar room billiards. It is Heinlein without the messianic overtones (or the breast fixation); Primary Colors where anonymity and identity ultimately prove to be fungible; Billy Phelan's Greatest Game for the 21st Century. Baruth's portrait of Clinton evokes the inexplicable "fullness" of an incomplete man (Wolfe's Charlie Croker) and, at times, the near majesty of the ultimate political animal in command of very considerable powers of persuasion and appeal. The yBC character (Clinton as a boy) is near perfect -- a mixture of promise and promiscuity that just feels right.Over and over, Baruth nails the details from the shape of Clinton's hands to Carville's nearly freakish power of recall (which is hilariously and ingeniously "explained"). Baruth understands both the people who shape political change and those charged with telling and thereby shaping their stories. The X-President is an enormously entertaining book that, like one of its central characters, ultimately questions what is is. Baruth here calls and pockets a difficult bank shot. His readers prove to be the winners.
Trustpilot
Copyright © 2022 Thriftbooks.com Terms of Use | Privacy Policy | Do Not Sell or Share My Personal Information | Accessibility Statement
ThriftBooks® and the ThriftBooks® logo are registered trademarks of Thrift Books Global, LLC