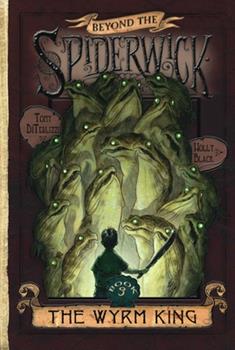 (Book #3 in the Beyond the Spiderwick Chronicles Series)

In the final installment of Beyond the Spiderwick Chronicles , Nick and Laurie had thought they solved their giant problems when they drove all the giants into the sea. But now, the Grace kids have come back to tell them they may have more trouble coming their way It turns out the giants control the population of Hydra, a dragon like creature that is creating sinkholes all over Florida. But with the mermaids refusing to return the giants to the shore,...

Published by Thriftbooks.com User , 11 years ago
Like the earlier Spiderwick series, this chapter was good. I think the readers here preferred the earlier books; but quoted this one as quite good too.

A Dazzling Capper to the Series

Published by Thriftbooks.com User , 12 years ago
Nick's punishment after being out all night with Jules and Laurie is the worst imaginable. His dad, who blames himself for their problems, hauls the entire family off to a counselor. The counselor insists they call her by her first name, wears her long gray hair in a multi-braided hairdo, and decorates her office with crystals, mood music and a big box of tissues. She also wants to "maintain positive spiritual energy" during their session. While "Teresa" yammers on, Nick is sunk deep in his own gloomy thoughts, pondering the fact that he had thought he was being heroic with the giant situation; instead, he managed to make everything unbelievably worse. But Nick tunes back in when he hears Charlene and his dad exchanging barbs about their children. And he is appalled when his father and stepmother announce they think the family will be happier if they separate temporarily. Although Nick and Jules apologize and ask them to stay together, their folks insist. On their way home, their dad must stop the car to avoid a tremendous sinkhole, which Jules and Nick believe indicates an ominous problem, especially after they call the authorities and learn there have been multiple reports of sinkholes. And, of course, there are those awful snake-like appendages Nick is almost sure he glimpsed creeping out from the sinkhole. When Nick searches for news about sinkholes in Florida on his computer, his worst suspicions are confirmed. Sinkholes have appeared everywhere, and the world is about to be destroyed. Noseeum Jack is gone, and all the other adults are totally clueless. That means it is up to Nick and the others to save the world. But can they? He gathers the troops: Laurie (along with her little faerie, Sandspur), Jared, Simon and Mallory. When they approach the sinkhole, a dangerous situation immediately develops, with one member of their group in extreme peril. Soon they are face to face with something much more horrifying than giants. As more (monster-populated) sinkholes appear and spread, Nick and his friends know they must take drastic action immediately, since time is running out. Nick believes he should persuade the nixies to sing as part of a solution, but in order to do that, he makes them a promise that leads him into a terrifying situation on top of a surfboard in the middle of the ocean. Plentifully illustrated with wonderful drawings, THE WYRM KING by Tony DiTerlizzi and Holly Black is a dazzling capper to the series, complete with a twist-and-turn plot, crazy scrapes with wild solutions, and an easily digested theme about the way humans can interfere with the environment to the detriment of all, even when they believe they're being helpful. The family issues strike a note of reality with which many readers can identify, and the fantasy and adventure are imaginative and enjoyable. --- Reviewed by Terry Miller Shannon

A tale of tails

Published by Thriftbooks.com User , 12 years ago
Holly Black and Tony DiTerlizzi's Beyond the Spiderwick Chronicles series somehow hasn't grasped me as tightly as their original series of teeny tiny, hauntingly eerie fantasy books. But the spinoff series roars to a satisfying conclusion with its third book, "The Wyrm King" -- while the frenetic pace is a bit confusing, it's a nicely gory, bizarre and intricate story. Because of their kids' bizarre behavior, Laurie and Nick's respective parents decide to temporarily separate -- and though this is what Nick wanted once, he doesn't want it now. But he hasn't got the time to be confused, because massive sinkholes are appearing all over their Florida city -- with something snakey inside. Suspecting something weird is up, Nick and his brother Jules join up with Laurie and the three Grace kids, and soon discovers that their new enemy is a sort of "wyrm king" (like a rat king, with the tails all joined together), which resembles the mythical hydra. They even find three tiny salamander-like creatures with one tail. Unfortunately, Nick soon finds that his old promises and actions are starting to trip him up, and he's losing the trust of the various faery creatures around him. Their only hope to stop the sinkholes is to set the wyrms' natural enemy on them -- the giants, who have been sleeping in the sea. But lurking somewhere in the city is the ultimate enemy of the giants -- a monster that even they may not be able to destroy. While the Beyond the Spiderwick Chronicles started off rather blandly (especially compared to the first series), "The Wyrm King" is a solid grand finale -- plenty of fire-spewing giants, monstrous dragon-things, and the ground collapsing as monsters hatch underground. And while the back cover proclaims "It's over!", the door is left wide open for Black and DiTerlizzi to continue the series someday. And Black and DiTerlizzi do a solid job plotting out a fast-paced adventure story that ties up various plot threads (the nixies, Jack Jr's giant-hunting), without losing its focus on the disgusting methane-breathing dragonets. Black's writing gives a genuinely magical atmosphere to the mundane Floridian setting, and provides the faery world with a sense of beauty and danger ("their long fins seeming to float, their scaly bodies lashing the water languorously"). And they weave in plenty of exciting scenes -- car chases (by a giant), Nick being briefly eaten, a brief exquisite trip into the underwater world of the merpeople, and a vaguely Lovecraftian climax. The biggest flaw with the book is that the frenetic pace gets a bit confusing at times. Nick spends much of this book dealing with the consequences of his actions and his various ill-chosen promises, as well as the fragmentation of his new blended family (turns out he doesn't want it as much as he once claimed). But despite his errors, he eventually shows his mettle as a hero. Laurie serves as a solid female lead, and Mallory, Simon and Jared serve as a solid trio of faery-f

Great but not as great as the original series

Published by Thriftbooks.com User , 12 years ago
I love the Spiderwick books. I'm not ashamed to say it even though I don't think they had 40 year olds in mind when creating them. I'm sad to see them end. I hope Holly and Tony will return to them in the future. These books are great all ages fantasy but I felt the original series was a little better than this one.

Published by Thriftbooks.com User , 12 years ago
this book is the best out of all of them it's full of action there's hydras, giants, merfolk,and nixies it is awesome buy it and read it!
Copyright © 2020 Thriftbooks.com Terms of Use | Privacy Policy | Do Not Sell My Personal Information | Accessibility Statement
ThriftBooks® and the ThriftBooks® logo are registered trademarks of Thrift Books Global, LLC