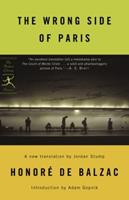 The Wrong Side of Paris

The Wrong Side of Paris, the final novel in Balzac's The Human Comedy, is the compelling story of Godefroid, an abject failure at thirty, who seeks refuge from materialism by moving into a monastery-like lodging house in the shadows of Notre-Dame. Presided over by Madame de La Chanterie, a noblewoman with a tragic past, the house is inhabited by a remarkable band of men--all scarred by the tumultuous aftermath of the French Revolution--who have devoted...

Published by Thriftbooks.com User , 15 years ago
With this volume, the curtain is brought down on Balzac's heroic, "The Human Comedy". It is hard for me to resist Balzac, even when I make a effort to do so as I did with this book. I found it, until about two thirds into it, exceedingly tedious, harping on as he does, about the Catholic church and conservative virtue. It wasn't until the primary character, Godefroid, re-enters the Parisian world from his confinement with The Order of the Brothers of Consolation that I felt at last in the company of Balzac the master. He very slowly enters into this tale and it is, after all, near the end of his exhausting, prodigious and sometimes absurd life that he wrote this short, two part story. This is not anywhere near my favorites in "The Comedy"; that goes to "Cousin Bette", "Cousin Pons", "Old Goriot" and "Cesar Birotteau" however I haven't had the privilege to read them all. But "The Wrong Side of Paris" delighted me in many of the ways his great volumes do; wonderful perspectives of 19th century Paris (some vanished, some still existing), his usual great asides about writers and their perils and his digs at the publishing industry, delicious humor and irony and his extraordinary talent for dialogue. How many miles of it run throughout his great collected work? Oh the divine Balzac, if only I could spend one afternoon with him! This Modern Library version is a very fluid translation by Mr. Jordan Stump with extremely intelligent and useful Notes by Mr. James Madden. Of all of the dialogue created by Balzac in all of the books of "The Human Comedy" this is the last line of it; "The power of God is infinite but human nature has its limits". I give this book only four stars because he has several better but any true fan of Balzac will see his genius shining through.

Published by Thriftbooks.com User , 16 years ago
After the first two pages, I found this to be a book that was very difficult to put down. As aptly put in the Translator's note, while I do not share the political or religous tendencies expressed, I found the characters and story completely absorbing.

Published by Thriftbooks.com User , 18 years ago
This is not great Balzac, though lovers of the Comedie Humaine will read it happily - and in a single evening because it is brief. Much of the story is background related by one character to another in a handful of long sections - a weak narrative strategy. The story of a father and grandson who collaborate to insulate their invalid daughter and mother from the truth of their economic situation might have been turned into a farce by Moliere or Beaumarchais. (And the invalid story has an almost exact parallel in a Dickens story published contemporaneously...) But the book is worth reading. Many observers have noted that although Balzac often reaches for poetic discourse, he rarely succeeds at the level of the best French writers. Some crtitics have even harsher opinions. At his best, though, Balzac crafts beautifully in an epigrammatic mode. His prose can be wonderfully dense with careful observation and his analysis as relentlessly logical and sympathetic as something by Montaigne or Voltaire. He is not a poetic writer, but he is a very easy writer to read and this is a first-rate translation. A REALLY good translation! Consider these two early paragraphs: "But here too, through the crude machinations of some, the prodigality of others, the wealth of his rival capitalists, the caprices of his editors, Godefroid was once again undone. At the same time, he was dragged into the many compromises of literary and political life, the habit of jeering from the sidelines, the endless distractions required by men whiose intellects are never allowed to rest. He thus found himself in bad company, but at least he learned that he had an insignificant face, and one shoulder greater than the other, and no unusual gift for ruthlessness or special generosity of spirit to compensate fior those flaws. The right to be rude is the salary that artists exact for telling the truth. Short, ill-formed, with neither wit nor direction, our young man had little to hope for in an age when the finest mind has no chance of success without the concurrence of good fortune, or the sort of doggedness that makes its own luck. " We owe Katharine Prescott Wormeley a great deal. Once we wander from the central canon of the Comedie Humaine, her tireless efforts in translating Balzac for the inexpensive "classics" volumes sold door-to-door in England and America around the turn of the century become the sole readily-available translations. While serviceable, they don't compare to those of Kathleen Raine or A.J. Kralsheimer or (especially) Rayner Heppenstall. Mr. Jordan Stump, on the strength of this volume, joins that exalted fraternity. Lest you think I'm too harsh on KPWormeley, consider her rendering of the same parapraphs: "In this sphere Godefroid was soon outdone by the brutal Machiavellianism of some, or by the lavish prodigality of others; by the fortunes of ambitious capitalists, or by the wit and shrewdness of editors. Meantime he was drawn into all the dissipations that

Published by Thriftbooks.com User , 18 years ago
There is something immensely comforting in reading a book by one of your favorite authors. In college, Balzac was always one of my favorite writers, mostly due to the scope of his lifelong writing project, a brilliant attempt to encapsulate all of Parisian life through fiction; the magic, politics, economics, and religion of a very unique group of people.This new translation is a wonderful addition to any English-speaking Balzac fan's shelf. Here you'll find Balzac's incessant cataloging of Parisian society set amidst an intriguing story. Godefroid, a directionless drifter, finds himself initiated into an underground religious group which performs acts of charity for the truly needy and unfortunate. The story consists mainly of Godefroid's education in the ways of the group and his application of that knowledge to his first "charitable assignment." I won't give anything specific away by telling you that there is marvelous twist in the story that gracefully pulls everything together at the end of the book. This is a book with a big heart and will not disappoint fans of Balzac. I only wish that someone would create a modern English translation of all of his novels. I guess I'm going to have to study back up on my French if I really want to read them all...
Trustpilot
Copyright © 2022 Thriftbooks.com Terms of Use | Privacy Policy | Do Not Sell My Personal Information | Accessibility Statement
ThriftBooks® and the ThriftBooks® logo are registered trademarks of Thrift Books Global, LLC