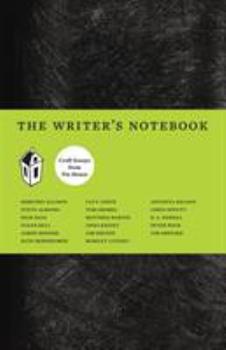 The Writer's Notebook I: Craft Essays from Tin House

(Book #1 in the Craft Essays from Tin House Series)

The Writer's Notebook: Craft Essays from Tin House combines the best craft seminars in the history of the Tin House Summer Writers Workshop with a variety of essays written by some of Tin House's favorite authors, offering aspiring writers insight into the craft of writing. Dorothy Allison, Jim Shepard, Aimee Bender, Steve Almond, D. A. Powell, and others break down elements of craft and share insights into the joys and pains of their own writing...

Published by Thriftbooks.com User , 12 years ago
This was a good read. The essays aren't for everybody, and I rolled my eyes at more than a few them. That said, I agree with the other reviewer that there are some real gems waiting to be underlined. The pieces are definitely not "how-to"--instead, they feel more like little stories about writing. Plus, the CD that comes with the book is great--it's fun to hear these writers speak in their own voices about their experiences with the written word.

Fun and sexy essays about writing.

Published by Thriftbooks.com User , 13 years ago
This is not your Mother's writing manual. Hell, Tin House's new book of craft essays, by a wonderful host of heavy-hitting writers, is not a manual at all, and it is so much the better for it. The Writer's Notebook takes its name seriously when presenting seventeen sexy essays that avoid giving step-by-step instructions, but confidently leads the reader on a pleasant hike up the mountain of writing craft. Leave your own notebook in the other room, but keep your pen handy, you may need to underline a few choice gems. These essays, while dealing with some of the usual suspects with renewed pizzazz, delve deeper and ask you to think about certain elements in a different way, like Mathea Harvey's deliciously bizarre turn at imagination and writing in "The Mercurial World of the Mind." The Writer's Notebook manages to lure you in and befriend you, but just when you think it's going to reveal the secret to writing success, it chuckles and admits it's merely trying to get you thinking about writing from a different and fresh perspective. Often the authors confidently divulge their wisdom in the clever guise of their own mistakes, as in Peter Rock's "The Telling that Shows: Some Provocations from inside the Story." Mr. Rock states "---" This seems to be the general tone of the Notebook. Even as Margot Livesey points out Shakespeare's mistakes and success in, "Shakespeare for Writers: Sixteen Lessons." If you are seeking the distilled wisdom in the form of a key to success, turn left and follow the heavily trodden path of 12 step programs. However, if you want to journey with Tin House's fantastic stable of wise Authors and Poets, Authors that speak with great character and kindness, then follow them down the bramble trail and pick up this Writer's Notebook. You'll emerge with some minor gashes in your writerly thinking, but the scars and these essays will likely help you write better stories.
Trustpilot
Copyright © 2022 Thriftbooks.com Terms of Use | Privacy Policy | Do Not Sell or Share My Personal Information | Accessibility Statement
ThriftBooks® and the ThriftBooks® logo are registered trademarks of Thrift Books Global, LLC