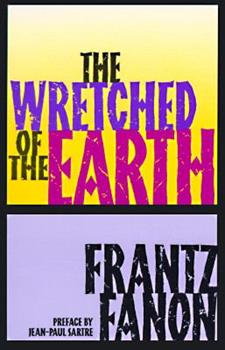 Wretched of the Earth

Fanon, champion of the Third World

Published by Thriftbooks.com User , 18 years ago
Almost all prominent black revolutionaries of the 1960s, from Malcolm X, Huey Newton, Nelson Mandela carried heavy influences from Fanon's writings in their struggles from social change and racial equality. However, Fanon's "wretched of the Earth" could arguably be the ultimate manifesto, or bible of Third World liberation. Fanon was no Gandhi, though. ; he makes his strongest point to suggest that all solutions to decolonization lay on violent revolution by using the Frech-colonized Algeria as a model and his Manichean (Good Vs. Evil), or bipolar portrayal of the endless antagonism that naturally arises between the colonized and the settler. Fanon describes the conditions that emerge to allow for a war of liberation to take a foothold, the wave of repression unleashed by the occupying army to put down the rebellions, and most interestingly - because it is what has taken place ever since - the prospects of continued exploitation by the established relationship between the new "revolutionary" bourgeoisie and the former colonizer country after the nationalist struggle and pressure at home had forced its withdrawal. Fanon gives psychologycal analyses to testimonies given by his Algerians and French patients during the war period, and who had been affected directly or otherwise by the war. Cases involving French soldiers and police's torture, selective asassinations, surviving a mass killing, and gang rapes of rebels' wives by the French are some of which Fanon describes with chilling detail in the appendix. "The Wretched of the Earth" remains an invaluable document that testify to the often overlooked argument made by numerous armed movements of the 1960s as revolutions broke out throughout the ex-colonized World.

Published by Thriftbooks.com User , 18 years ago
This is a very useful book to anybody interested in understanding colonialism and its effects in Africa. Colonialism was a military project, and Fanon explained that clearly. Fanon does not shy away from suggesting the use of force, if necessary, to achieved freedom. But this book is not about the use of force/violence to achieve freedom, and should not be regarded as such. It is a book that explains western attitudes towards the colonized world, their willingness to use violence, their assault on African culture, and the curruption of African leaders after independence. Do not forget that independence came to Africa, after the French, the British and Belgians were given a clear warning about the fate that was awaiting them in other parts of Africa by the FLN (in Algeria), the MAU MAU movement (in Kenya), and the very aggressive movement for indepence in the Congo and Ghana. Europe was distoryed after World War II, and their armies could no longer sustain their military projects in Africa. This vulnerability was exploited by African leaders. That is why they failed in maintaining direct colonial control of their former colonies. When you ready this excellent material, you will appreciate Fanon's foresight:-his warning to Africans(and every colonized country)to take their destiny into their own hands: saying that every generation must out of relative obscurity, find its mission, fulfill it or betray it. A warning that most Africans ignored after independence. To anybody interested in the works of people like Dr. Walter Rodney, Aime Cesaire, Chinua Achebe, Wole Soyinka, and Basil Davidson, this book is a "Must Read". Please read other Fanon material: Toward African Revolution, Dying Colonism, Black Skin White Masks. Interesting reading! Every African must read Fanon's books!

Fanon Does Not Glorify Violence! (and Other Corrections)

Published by Thriftbooks.com User , 19 years ago
Those reviews that castigate Fanon for "glorifying violence" ought to be ignored. Fanon is writing, among other things, a phenomenology of anti-colonialism. It is meant neither as a recommendation nor a condemnation but as a description of the objective truth of a historical condition. That is, for Fanon reverse racist violent nationalism is a stage in the emergence of a political consiciousness that will eventually overcome and, indeed, renounce its own beginnings. What is remarkable is that people at present are so manifestly incapable of reading a dialctical unfolding such as this. The violence of the Algerian War had already largely taken place at the time of Fanon's writing and, let it be recalled, it was primarily the murder of Algerians by the French, for whom African imperialism is still a profitable if somewhat unsavory business.While Fanon tracks the stages in the evolution of a radical anti-capitalist consciousness in the underdeveloped world, there is no question of his endorsing or advocating violence. One has only to read the final chapter on the psychological effects on both the colonizer and the colonized to see that Fanon is acutely aware of the brutality for all concerned of the Algerian War, even or, indeed, especially, for the oppressors themselves. There is certainly no question of his endorsing the indiscriminate horrors committed that were committed by the FLN against their oppressors. The other thing, of course, that the petulant, anti-intellectual, ahistorical reactionaries who have shared their opinions here conveniently ignore is the violence inherent in the settler colonialism Fanon was addressing. As for the comparison with India, it is indeed illuminating, and one might profitably develop Fanon into a critique of the post-colonial India elite. After all, the real thrust of the book is its attempt to push anti-imperialism in a genuinely democratic direction, insofar as this was even possible for a largely peasant agricultural society caught within a much larger capitalist cosmos. At any rate, contra one reviewer, in the much-vaunted democracy of India, were peasants substantially liberated by the Indian National Congress from their indebtedness and from coercive labor practices? For his part, Fanon is not content with such liberal eye-wash as the talk of "Indian democracy" achieved through non-violence. In stark contrast to many other romantic commentators, he is keenly aware that there is nothing save radical democratic organized politics that can prevent post-colonial societies from a descent into poverty, despair, and the reactionary resurgence of "leadership" and virulently post-traditional "ethnicities" and "religiosities" though, in the face of the further defeat of the radical left in the West, most likely there is nothing to prevent the implosion of the Third World and the exhaustion (and extermination) of progressive energies there. Pages 95ff. in which Fanon discusses the terrible brutality of

The perspective of the oppressed

Published by Thriftbooks.com User , 22 years ago
Fanon describes the situation of those livng all down under of humanity who have nothing to lose but their chains and they can get rid of their chains. What I found extraordinary interesting was to compare Frantz Fanon to Ayn Rand: Those whom Ayn Rand regards as "social parasites" are e x a c t l y the same that Frantz Fanon describes as "The wretched of the earth" . So if you read "Atlas shrugged" and "The wretched of the earth" in a row, you'll get two opponent perspectives of the same world.

The authority on Colonialism

Published by Thriftbooks.com User , 22 years ago
Fanon is among the few thinkers who successfully wrote about emerging post-colonial nation-states. Many prefer to delve into the psychological implications of his work but I would rather view it as a warning againt the new tyranny that has its roots in the national struggle. Indeed, many nationalist movements became the new proxy for the departing colonial power thus ignoring the fact that fighters do not by default make good politicans. The dicourse of national struggle became the harbinger of the national dictatorship despite the evidence pointing to the outskirts and villages as being the impetus behind the drive for independence and not the educated classes as many claimed. I am not claiming that national struggle is bad but it has to be viewd objectively and its role must therefore end with independence to allow for genuine restructuring or else a political neo-imperialism emerges to replace direct military colonization. In both cases the winner is the colonizer who has returned in the form of the new nationl government mainly those who were educated in the West during colonization.
Trustpilot
Copyright © 2022 Thriftbooks.com Terms of Use | Privacy Policy | Do Not Sell My Personal Information | Cookie Preferences | Accessibility Statement
ThriftBooks® and the ThriftBooks® logo are registered trademarks of Thrift Books Global, LLC