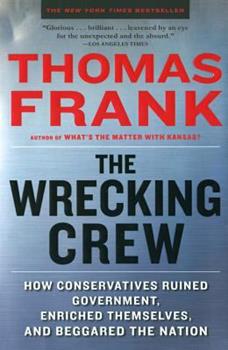 The Wrecking Crew: How Conservatives Ruined Government, Enriched Themselves, and Beggared the Nation

From the author of the landmark bestseller What's the Matter with Kansas? , a jaw-dropping investigation of the decades of deliberate--and lucrative--conservative misrule In his previous book, Thomas Frank explained why working America votes for politicians who reserve their favors for the rich. Now, in The Wrecking Crew , Frank examines the blundering and corrupt Washington those politicians have given us. Casting his eyes from the Bush administration's...

The Rosetta Stone of the George W. Bush Administration

Published by Thriftbooks.com User , 13 years ago
This is a fascinating, extremely well referenced work about the neocon rule book. It explodes all the rumors that Bush is not smart. He has actually just been following this rule book. Rule One: Government services are bad and business services are good. Attack big government. Rule Two: Weaken government services so you can declare them incompetent and subcontract out the government services to private businesses. Rule Three: Replace personnel in key government service positions with your friends, whether or not they are qualified to do the job. Rule Four: Run up the debt, declare a crisis and cancel social services. Rule Five: Demonize and demoralize the liberals. Blame them for whatever goes wrong. Rule Six: Strengthen the ties between businesses and government by hiring only "business-friendly" people and by encouraging business to help write the bills to be passed by the congress.

Published by Thriftbooks.com User , 13 years ago
"The Wrecking Crew" starts out slowly and then builds to a steady revelation of conservative secrets and travesties. It is a "Must Read" for all those interested in good government. Conservatives see government as meddling in the market - a force of godlike omniscience; their aim is to ensure government impotence. Liberals, on the other hand, see markets as unstable and needing control by organized intelligence. Conservatism's recent triumphs began with the discovery of the enormous profits possible from business support for conservative activism, especially direct mail. Unfortunately, accuracy was not an issue. A second major benefit came from Howard Phillips "defund the left" doctrine, augmented by "fund the right" - faith-based organizations, private contractors with the right politics and the clients of favored lobbyists. The tendency of government workers to join unions makes them even more detestable to conservatives. Now far more people work under contracts than are directly employed by the federal government. A favorite conservative tactic has been to shut down offices that supervise outsourced operations, or even outsourcing the activity. Running on a platform that government is "part of the problem" does not attract good people, thus generating a self-fulfilling prophesy. This is reinforced by holding down salaries. Alternatively, private government contractors return the favor by political donations, while no-bid contracts negate the principal of competition leading to improved performance. The "revolving door" from government worker to industry is another major problem. Republicans in 1995 discontinued record-keeping on the topic. However, one study found that 43% of Congresspeople leaving office since 1998 have become lobbyists, up from 9% in the 1970s. Putting those opposed to a unit's mission in charge of it helps negate the intended value, without creating the clamor that abolishment would; it also makes it more more difficult for supporters to reassign its role. Ensuing actions include stripping agency worker supporters of authority, spying on them to find reason for firing, alleging "fat" in the unit, delegating enforcement to those being regulated, and reducing enforcement staff. Lobbying, think-tank subsidies, slanted pundits and journalists have been enriched by the conservative wave. In 2004 a group of the nation's largest corporations paid a K Street firm $1.6 million for tiny modification of the tax code. The result was they saved $100 billion - about a 6 million percent ROI. Corruption is a subject conservatives think they understand well - they simply locate it somewhere in the liberal state, in areas such as mass transit, FTC and FDA supervision, etc. Grover Norquist, a conservative leader, asserts that wasteful earmarks are useful because they help destroy faith in government, and consequently its support. Thus, government failures (eg. Katrina) fuel conservatives, even when caused by conservat

Published by Thriftbooks.com User , 13 years ago
With the recent books by Jane Mayer, Naomi Klein, Scott McClellan and others I was looking for a composite of how the current administration accomplished their dismantling of government. Mr. Frank has come close to explaining how the conservative thinking came to pass and functioned. This may not be the one book to record the travesty of the last eight years and beyond but it comes close. Mr. Frank contends the dismantling of government was premeditated by the Bush-Cheney administration and like-minded supporters. Frank contends the appointments to regulatory agencies and other governing bureaus were intentionally incompetent or non-supporters of their assigned agencies. They either incompetently or deliberately neutered these agencies. He states the department of labor was intentionally made impotent in 2 and a half months. We all are privy to the Gonzales incompetence, the "Brownie is doing a great job" incompetence and John Bolton's hate for the United Nations. Frank implies these appointments were intentional to prove that government doesn't work. Frank's book can be summarized as stating the Bush-Cheney and supporters set out to prove government doesn't work and implies they also had intent to line the pockets of their supporters. Mr. Frank hits upon the Jack Abramoff - Grover Norquist group pretty hard. He explains how Mr. Abramoff's antics played in the group and how he appearred to be above the law. Thomas Frank's The Wrecking Crew may not be the final history book I was looking for, as it is slanted to the left, but then maybe the true history of this time may be that the right is nothing but a bunch of thugs. Only history can judge.

A Depressingly Compelling Review of Conservatives' Philosophy of Government in Practice

Published by Thriftbooks.com User , 13 years ago
Following up on his masterly examination of the paradox under which Red Staters consistently vote Republican against their own economic self-interest (WHAT'S THE MATTER WITH KANSAS?), Thomas Frank sets out to trace the present-day conservative Republican approach to government in THE WRECKING CREW. What he demonstrates is deeply disturbing even though it has remained on display virtually every day of the entire Bush II administration. According to Frank, the conservative worldview is totally committed to "the ideal of laissez faire, meaning minimal government interference in the marketplace, along with hostility to taxation, regulation, organized labor, state ownership, and all the business community's other enemies. "The conservative movement promotes the interests of business exclusively over all else in accordance with the motto, "More business in government, less government in business." So-called "big government," also tagged as the liberal state, is the enemy; in fact, virtually all government is the enemy, other than the national defense. Mr. Frank follows the conservative movement from the turn of the Twentieth Century through the Depression and New Deal, focusing most heavily on the movement's rebirth under Ronald Reagan and on into the new millennium. Along the way, he discusses the growth of lobbying as a major force in converting the nation's capital into a massive feeding ground for corporate special interests. Frank also highlights the manner in which conservatives have repeatedly run the country into huge spending deficits in order to "defund the left" while simultaneously politicizing government management positions by favoring ideology over competence. The end result under Republican conservative stewardship is government that demonstrates itself as ineffectual and incompetent, offering but further proof that big government is inherently incapable of working and needs to be outsourced to private, professional concerns who can do the job correctly (and then inevitably failing to do so). THE WRECKING CREW is filled with fascinating side observations, such as its note that the movement has always lionized bullies, from Joe McCarthy to Bill O'Reilly, from Jack Abramoff and Tom DeLay to George Allen and Michelle Malkin (whom Frank describes hilariously as "a pundit with the appearance of a Bratz doll but the soul of Chucky"). The book's most effective and outrage-generating section has to be its chapter on the Marianas Island of Saipan. Frank casts Saipan, with all its corruption, nepotism, income inequity, slave labor sweatshops, and local political control exercised in the name of big business as the perfect and ultimate model of the conservative movement ideal, a truly horrific prospect. He also notes, properly, that the morass that is today's Iraq is equally a product of the attempt to force fit these same free market ideals to a foreign country, implemented (so the Bush Administration hoped) by inexperienced, wet-behind-the

Another Must-Read from Thomas Frank

Published by Thriftbooks.com User , 13 years ago
For those of us looking aghast at the endless flow of partisan venom that's become our national media, the feckless catastrophe that's become our national government, and wondered how so many self-proclaimed uberpatriots have managed to steer America from the country the world loved to a blowhard much-despised power in a few short decades, Frank provides interesting answers (and they're well-researched and excellently documented, unlike the spewings of some current conservative chart-topping bestsellers). This book's both horrifying and wickedly funny -- each page is a mixture of laughs and groans of disgust. Difficult to see how even the most rabid partisan could quarrel with many of his conclusions, as they're drawn from direct quotes; Frank's a master of giving pompous politicos enough rope to hang themselves. A page-turner par excellence, and essential reading for any thinking American in this most vital of election years.
Trustpilot
Copyright © 2022 Thriftbooks.com Terms of Use | Privacy Policy | Do Not Sell My Personal Information | Accessibility Statement
ThriftBooks® and the ThriftBooks® logo are registered trademarks of Thrift Books Global, LLC