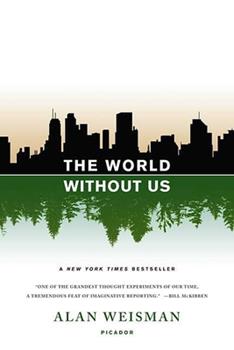 Published by Thriftbooks.com User , 15 years ago
This is a CLEVER book! Exceptional, macabre, subversive, frightening, (vaguely seditious, even) - and assuredly harrowing - Weisman has constructed his thesis in such a fashion as you never see the sucker punch coming until long after he has set you up - and then it is too late. (Which, ironically, could be taken as the ultimate truth to be gleaned from this book.) I originally read a short excerpt a year or so ago in Discover magazine wherein Weisman described how, as I recall, New York would eventually disappear, beginning to disintegrate almost immediately upon the disappearance of the humans needed to maintain its physical infrastructure. (Interesting real world irony: the recent - August, 2007 - flooding of the New York subways by three inches of storm water and resulting shutdown/disruption of the system wonderfully underscore Weisman's discussion of that city's demise.) I picked the book up upon its release expecting more of the same - you know, descriptions of the crumbling majesty of man's works, the exposure of the weakness of our technology, the inability of our monuments to actually endure without us, and to a great degree I got what I paid for. But that is only the icing on the cake. As I said, this is a truly clever book, both in structure and execution. It would appear the author has engaged a particularly subversive technique in selling his book by appealing to a rather compulsive (and vaguely perverse) need within the human animal to see what follows him, to understand what things will be like after he is gone, much like the wish to attend one's funeral to find out what memories will survive your ending. The set-up is delightful: in order to first discuss what the world would be like without us, one first must discuss what the world was like before we arrived and built our civilization, and then examine how the world has changed due to our civilization's "footprint". Only then is a contextual reference in place from which the author can give us an understanding of what the world will be like after our passing. The end result: in very clear and accessible language, Weisman details how we have really made a mess of things without ever appearing to lecture us. Instead, utilizing an almost casual, yet precise style of writing, peppered with sprinkles of dry humor, he examines the effect of things such as the breakdown of plastics, the remains of our petrochemical industries (the section on Houston, Texas is downright mind-boggling), the way in which modern building techniques will be overwhelmed by the forces of nature, and the manner in which nature will quickly move to fill in the gap made by our disappearance from the biosphere. All the while Weisman breaks down the science that allows us to understand why these things will occur into manageable bits and pieces, never leaving us scratching our heads in confusion at what he is describing. He uses examples from the real-world to underscore his points; the section on the r

Published by Thriftbooks.com User , 15 years ago
This is an oddly hopeful book. Hopefull because it offers compelling evidence that life on earth will outlive human tampering with the ecosystem, yet odd because it also demonstrates that the world won't miss us much. In fact, it's pretty clear that, on balance, the world would be better off without us. "Balance" is the key here, something that we as a species know little about. Even though we are well aware that we're destroying our own habitat, and have been for at least 60 years, we can't seem to stop ourselves. But author Alan Weisman isn't a scold and doesn't do a lot of overt finger wagging, which is one of the reasons to buy this book. Rather, he offers absorbing examples of the many ways in which life bounces back after eco-tragedies like Chernobyl and, going back farther in time, various ice ages, volcano eruptions and asteroid pummelings. One of my favorite examples is Weisman's description of the DMZ between the two Koreas, which has been a no-man's land since the late 50s when a stalemate was reached between the two sides. Rare cranes are staging a comeback in this zone, as are various types of flora and fauna that would probably be extinct by now were it not for this narrow strip of land where people don't go. And this resurgence has taken place in spite of rampant pollution and periodic explosions from abandoned land mines. There is even a conservation group that has grown up in South Korea to advocate for the cranes and, by association, preservation of the DMZ. There's one upside to the continuing standoff at the 38th parallel. Lately, I have been interested in emerging viruses and the resurgence of diseases that humans believed we conquered (at least in the US) such as TB and cholera. Weisman presents some interesting linkages between alterations in the environment (think greenhouse gases) and the rise of microbes that are resistent to long-standing medical treatments. But it is his discussion of unanticipated benefits of some human errors that is most astounding. Take, for instance, the island of Cyprus, which has been split between warring Greeks and Turks for the past 30 years or so. One group abandoned a resort city on one side of the island because the peace agreement assigned that area to the other ethnic group. As the buildings and infrastructure have slowly crumbled, plant life has flourished and a range of animal species have moved in, making the place somewhat akin to a nature preserve. And this has occured despite the fact that much of the infrastructure releases poison gases and foul debris as it inexorably deteriorates. All of this is to say that, given enough time and absent human interference, Mother Earth will quite likely heal herself, and perhaps a new "top dog" species will evolve to replace us. I can't help feeling that this is good news, especially if evolution makes our descendents a little smarter than we seem to be.

Excellent, intriguing look at world without humans. Also, if you like post-apocalyptic books

Published by Thriftbooks.com User , 15 years ago
Basically, this focuses on a "what if" situation: what if something, be it the bird flu, a new virus or (fill in the blanks) destroyed all the people on Earth? What then? What would happen to our world, without us in it? Using a combination of very solid research and science, the author gives readers a view of what would -and would not - endure -and for how long. He gives a look at the world shortly after we leave and then a futuristic look at its evolution from there, with various scenarios. I found it riveting to read. Also, it made me realize that, as important as we may consider ourselves, the earth could evolve and change without us, often in positive ways. It was humbling, at least for me. Finally, the writer's style is just breathtaking. I can't sum it up here (it'd be like trying to describe a painting instead of seeing it firsthand) but the writing makes the book extremely rewarding. I'd have gotten through it, even if written by a less competent writer, because I find the subject matter inherently fascinating, but I'm grateful that this was so nicely done.

Published by Thriftbooks.com User , 15 years ago
What would happen if humans suddenly disappeared? Almost everything around us artificially created would be consumed by nature within a few hundred years of our disappearance. Buildings would collapse; road and dams would disintegrate. Some things would last much longer: lead, plastics, and radioactive materials. Oil refineries and nuclear power plants would explode and send incredible amounts of pollution across the globe. Assuming the damage from the latter could be contained or overcome, most of nature would revert to something resembling its prehistoric origins. "The World Without Us" grew out of a magazine article on the same subject. Recently another science magazine ran a similar article that gave readers all the good stuff up front. In the book Weisman occasionally gives a few too many details as, for example, when he mentions the physical appearance of the scientist he is discussing. Color photographs and illustrations would have been an improvement. But this is an important book because it suggests just how much harm we continue to do to the environment by telling us what would happen if we all disappeared. As Weisman says near the end of the book, human activity is destroying much of nature around us, but we may end up destroying ourselves in the process if we don't stop our ways soon. He suggests that limiting each couple to one child would eventually solve the population problem and bring humanity more in balance with nature. He doesn't say how this could ever be enforced, but population control does seem to be the answer. A fine book---provocative and alarming.
Trustpilot
Copyright © 2022 Thriftbooks.com Terms of Use | Privacy Policy | Do Not Sell or Share My Personal Information | Accessibility Statement
ThriftBooks® and the ThriftBooks® logo are registered trademarks of Thrift Books Global, LLC