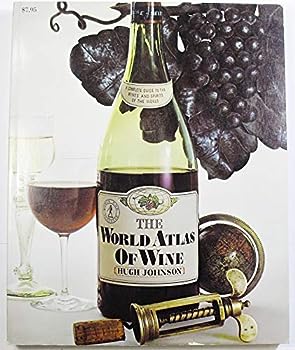 The San Francisco Chronicle has called The World Atlas of Wine "a glorious book", and now, in its fourth edition, this treasured classic expands its coverage and enhances its beauty, with stunning updated full-color artwork throughout. 1,400 illustrations, 84 photos, 185 maps, 24 charts.

Note - this is the SIXTH edition!

Published by Thriftbooks.com User , 13 years ago
The editorial notes for this listing refer to the 5th edition, but the listing itself is actually for the new, 6th edition. I own the 5th and have gone through the 6th in some detail. It is worth buying the newer edition if you have an earlier edition. The authors have not only added a couple dozen entirely new maps, but the format itself is nicer, in my opinion, and of course, the contents have been comprehensively updated. New editions of this book are not as frequent as the annual pocket guides (co-author Hugh Johnson's is excellent - Hugh Johnson's Pocket Wine Book 2009: 32nd Edition (Hugh Johnson's Pocket Wine Book). The 5th was published in 2001, and I would not expect the 7th edition for several years. This is a favorite wine book, and, unlike ratings-focused books, not quite so readily replaceable by software and not particularly suited for mobile devices. A wonderful use of this book is to read about a region then go buy a few representative wines, which will help enormously in fixing the reference information in your mind as well as increasing the enjoyment of the wine itself. It's also a nice companion to wine articles in Wine Spectator and other magazines to supplement the tasting and travelogue information typical in such articles. It is a shame that there isn't a "Look Inside" for this book. If you are unfamiliar with it, the World Atlas' maps are quite wonderful. Not just plain-Jane maps, but viticultural maps, with chapters and pages of accompanying commentary to help you understand the unique characteristics of each region as it pertains to wine. It is a delightful book to leave lying around, as you can read a page or two casually - each region stands on its own, i.e., this is not a book you have to slog through cover to cover.

Published by Thriftbooks.com User , 20 years ago
The "World Atlas of Wine" lives up to its title as a definitive guide to the world's wine growing regions. The maps range in scale from all of Bordeaux down to individual communes such as St-Estephe and Pauillac, with major co-ops and estates clearly indicated. The maps are so detailed they could be used in lieu of Michelin to drive from La Chapelle in Hermitage to Vieux Telegraphe in Chateauneuf du Pape. With the text, I could probably lead a guided tour. Although France is given pride of place, California, Spain, Italy, South America and Australia are also well covered. But the book's far more than just a set of geo-political maps of wine regions. It's also full of geological information about soil, consumption, production, etc. It really is an atlas. And the writing is quite a bit less dry and "objective" than your usual "atlas"; Johnson and Robinson are both fantastic wine writers. I also found the reproduced labels most instructive.Every other book on wines has left me wishing for better maps, including the Oxford Companion to Wine edited by Jancis Robinson. Now I read them with the "World Atlas of Wine" at my side. I only wish I could order the maps as posters.

Wine on the Page Instead of In a Glass

Published by Thriftbooks.com User , 20 years ago
Plenty of people enjoy wine solely for its taste--and they're entitled to. But they're missing an awful lot. Wine isn't merely a drink but a whole world of people, places, history and culture, and those are things most wine drinkers remember far longer than taste. For them, this new edition--the fifth--of Hugh Johnson's wine atlas (first published in the 1970s) will be a treasure. It now has a co-author in Jancis Robinson, who is Britain's high priestess of wine. Maybe that description is a little intimidating; what I mean is that she know a tremendous amount about wine, and what I want most of all to convey is that she shares her knowledge and enjoys sharing it. She'd rather inform than impress; she wants you to have as good a time as she does. And she and Johnson have given you, in this book, a passport for that purpose.This book gives you noting less than the whole world of wine on the printed page. There are maps, of course, maps beyond counting of the fabled wine regions of France and of the stunning wine regions of Italy, surely the most beautiful of wine countries as well as the sources of many of the greatest bargains. Wine's New World is well represented too: the U.S., which is no surprise (and Canada, which to many people is) as well as Chile and Argentina, Australia and New Zealand, and South Africa. Hungary, Bulgaria, Croatia, Romania and the former Soviet Republics are covered--they're making comebacks after years of awful "socialist wine-making" under Communism. And the list goes on. Even Japan and England are here--they do, after all, make more than sake and beer.There's a wealth of background information, too, on everything from vines to the mystique of what the French call "terroir," storing and serving, matching wine with food, the many grapes that make so many wines (in Italy, for example, the Sangiovese grapes is the core of half a dozen winess in Tuscany alone), and of course how wine is actually made. And all of it is readable and enjoyable, making this a complete wine course at a bargain price. Put a log on the fire, grab a glass, pull a cork and settle down with this book. Choose an especially comfortable chair--odds are it'll be a long time before you're ready to get up.--Bill Marsano(The reviewer has won a James Beard medal for wine and spirits writing.)

Published by Thriftbooks.com User , 20 years ago
Putting the brilliant wine writers Hugh Johnson and Jancis Robinson together to update the 4th edition of Hugh Johnson's classic work was an inspired choice. Each is superb on her or his own. Together, they are stunning in this, their first collaboration!Whether you want to give a wonderful gift or simply to have a great wine reference, this book is an outstanding choice. The World Atlas of Wine will deepen your pleasure in wines you enjoy, and guide you to wonderful visits to outstanding vineyards and wineries during your travels. Hopefully, your tasting experiences will benefit as a result!If you do not know the predecessor works, let me describe the book's layout. It begins with brief sections on the history of wine; basic facts about the influence of soil, temperature, varietals, wines, wine-making, storage, serving, and tasting; and has helpful information about how to read labels and interpret technical terms.The heart of the book comes in individual essays about wine-growing regions around the world. These are very complete. France has 58 sections, Italy has 18, Germany shares 14, the United States is covered by 12, Spain is represented by 8, Australia has 7, Portugal has 6. Many other countries are covered as well, including parts of the former Soviet Union, the Balkans, North Africa, South America, and smaller countries in Europe. Each individual wine-growing region is organized around an updated map. For this 5th edition, 148 maps were redrawn from the 4th, and 30 new maps were added. These maps show where the major wineries are, different vineyards, qualities of grapes, altitudes, major roads, and locations is cities within the area. In some cases, these maps are also supplemented by detailed examples of soil differences and temperature gradients. Each region has at least one beautiful color photograph to give you a sense of the geography. Within the accompanying essay is a detailed discussion of how the locale affects the taste and qualities of the wines that are produced there. Anyone will find themselves learning a lot from this atlas. Even if you were familiar with a region ten years ago, chances are that it has changed. The atlas will bring you up-to-date. In addition, you can learn about new regions and wineries whose wines may interest you. A nice feature of the book is a bound ribbon for marking your place. Considering the remarkable quality of the contents and reproduction of the maps and images, this book is extremely fairly priced.The predecessor four editions have sold 3.5 million copies over the last 30 years. I think we can safely assume that this volume will sell in the millions as well. If you already own the 4th edition, you would be well advised to buy this one also.Where else can understanding local conditions help you appreciate more about what is going on? How can you gain that experience and knowledge?Let curiosity pull you forth from old habits . . . into better ones!

Best all-around wine book; has stayed the course over years.

Published by Thriftbooks.com User , 23 years ago
Everything you need to know to get you started, to develop you, to polish you, and then to guide you to where the best wines of the world are produced. Crisply, sensibly, eruditely written. The perfect wine book; the only book I religiously update when new editions are released. Hugh Johnson is simply the best.
Copyright © 2022 Thriftbooks.com Terms of Use | Privacy Policy | Do Not Sell My Personal Information | Accessibility Statement
ThriftBooks® and the ThriftBooks® logo are registered trademarks of Thrift Books Global, LLC