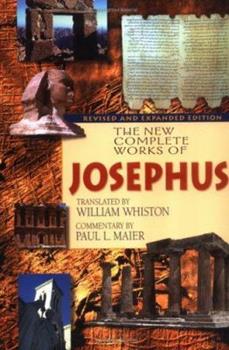 The New Complete Works of Josephus

by Flavius Josephus and William Whiston

No source, other than the Bible itself, provides more relevant information on the first century than the work of Flavius Josephus. This newly edited version updates the original 18th century language; includes commentary by the award winning author and historian, Dr. Paul L. Maier; features over forty photos of ancient sites and artifacts mentioned by Josephus; cross references numbers throughout to the Greek text of Josephus in the Loeb Classical...

Antiquities of the Jews

Published by Artur , 1 year ago
I just wanted to know if it's possible to obtain the works of Josephus without the Christian forgeries.

Published by Jay Benjamin israel , 2 years ago
Why were their dirty toothpicks in the book and a stain on it please message me back shalom

Published by Teegsdad , 3 years ago
What I expected

Published by Loretta , 3 years ago
It was supposed to be a hardback book.

Published by Thriftbooks.com User , 22 years ago
Flavius Josephus (about AD 37-101) lived and worked during the first century AD, a time when major events occurred that would impact Judaism forever and the religion known as Christianity was born. He provides us with firsthand information regarding the Jews and Romans, which acts as good background information to the New Testament writings. After all, he lived during the time of the early Church. He also (scholarly debates aside) mentioned Jesus, John the Baptist and James. This edition includes his complete works. They are:The Life of Flavius Josephus: This allows the reader learn about the life of Josephus from his own pen.Antiquities of the Jews (20 chapters): It chronicles the history of the Jewish people from the Genesis creation account until the outbreak of revolt in AD 66. This section also includes information on the Roman leaders of the Jewish province, such as the Herods.The Jewish Wars (7 chapters): This is Josephus' account of Jewish uprisings and wars. It starts with Antiochus Epiphanes. Most of the book, however, chronicles the Jews under the Romans, including the subjugation by Vespasian, the siege and conquest of the temple by Titus and the sedition of the Jews at Cyrene.Against Apion (2 books): This is a defense of the antiquity of the Jewish people and a refutation of the charges brought against them by the grammarian Apion of Alexandria.An Extract from the Discourses to the Greeks Concerning Hades: This short document outlines "Josephus'" views on Hades. Many scholars do not think Josephus is the author.The translations are fairly easy to read, but since they were completed in the middle of the eighteenth century some words may be difficult for certain readers. This edition also includes annotations that illuminate difficult passages in the text. These are very helpful. There is an index of names and themes, a very helpful feature for readers who want to find information on a certain person, place, etc. This edition also contains a table of Jewish weights and measures, a list of Old Testament parallels, and a list of the ancient sources cited by Josephus. There are eight black and white maps too. An appendix with 7 scholarly essays that examine certain issues relating to the writings of Josephus has been included (e.g. the legitimacy of the reference to Jesus). They are old and do not represent modern scholarship. Consequently, they are not too helpful. Still, this book has the complete works of Josephus in an inexpensive package and anyone interested in Christianity, Jewish history, or the ancient world should not be without it.
Trustpilot
Copyright © 2022 Thriftbooks.com Terms of Use | Privacy Policy | Do Not Sell or Share My Personal Information | Accessibility Statement
ThriftBooks® and the ThriftBooks® logo are registered trademarks of Thrift Books Global, LLC