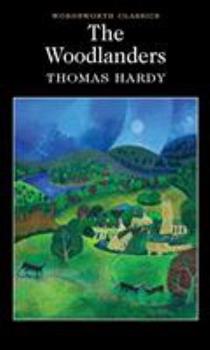 With an Introduction and Notes by Phillip Mallett, Senior Lecturer in English, University of St Andrews. Educated beyond her station, Grace Melbury returns to the woodland village of little Hintock and cannot marry her intended, Giles Winterborne. Her alternative choice proves disastrous, and in a moving tale that has vibrant characters, many humorous moments and genuine pathos coupled with tragic irony, Hardy eschews a happy ending. With characteristic...

Published by Thriftbooks.com User , 11 years ago
The Woodlanders is not Thomas Hardy's most famous or acclaimed work but was his own favorite among his novels, and many - perhaps most - fans put it in his top tier. This diehard Hardy reader puts it just below that, which is to say it is truly great. Neophytes should read better-known works first, but everyone should stop here quite soon. Perhaps the most immediately attractive aspect is its vibrant setting. Hardy seems to truly bring The Woodlands to life, describing with a vivid precision that will make it linger in the mind long after reading. It is my favorite Hardy setting other than The Return of the Native's Egdon Heath and many fans' favorite. Most Hardy novels and much of his poetry is set in what he called Wessex - a part-real, part-dream area, based on his native Southwest England, that he made world famous. Perhaps no one equals his profound sense of place; he describes scenes so believably and importantly that they become integral to the story. This is a preeminent example. All the Wessex novels are valuable for showing how a long-vanished world looked and how its people thought, spoke, and lived but none perhaps more so than this. The Woodlands are probably the most rural part of Wessex, which truly says much - a handful of cottages scattered among a thick forest. The real places on which Hardy based the area were almost gone by the time of the book (1887) - had indeed started going even before his 1840 birth - and are certainly gone now, as is nearly every remotely similar place in the Western world. Hardy's descriptive power thus does us a great service by making such a long-lost place seem so real that we not only seem to see it but feel and smell it also. As in The Return, the setting is so important that it is practically a character - arguably even the most important. The woods are described somewhat anthropomorphically and are essential to the plot in many ways. Anyone who thinks such things can never be truly important to a story should read this; literature has few better examples. Characterization is also strong. This was always a Hardy high point, and The Woodlanders has some truly memorable personages: the intelligent and well-educated Grace, who has in many ways overcome her upbringing's conventional shortcomings but is also a true Woodlands native; Giles, who has genuinely noble feelings and sentiments but is held back in the world's eyes by lack of education and a life tied to the Woodlands; Fitzpiers, who is well-educated, intelligent, and capable but selfish, hedonistic, and in other ways loathsome; Melbury, who truly loves and wants the best for his daughter Grace and has other admirable qualities but whose lack of insight sometimes leads to rash decisions and unfortunate consequences; Marty, a slight, lonely figure who is hard-working and capable of great love but virtually unnoticed by all; the beautiful and lofty but eccentric and essentially selfish Mrs. Charmond; and more. Also, as often with Hardy, there

Disaster at the altar in the church of Hardy.

Published by Thriftbooks.com User , 17 years ago
"It would have made a beautiful story," Thomas Hardy said about this novel, "if I could have carried out my idea of it; but somehow I come so far short of my intention." "I wish you had never thought of educating me," Thomas Hardy's protagonist tells her father at one point in this novel, "because cultivation has only brought me inconveniences and troubles" (pp. 232-33). Hardy (1840-1928) wrote his eleventh novel in 1887, before his better-known masterpieces, TESS OF THE D'URBERVILLES (1891) and JUDE THE OBSCURE (1895), and a year after THE MAYOR OF CASTERBRIDGE (1886). Set in the "partly real and partly dream country" of Hardy's Wessex, in the "sequestered" forest community of Little Hintock (located "outside the gates of the world," p. 6), a place where "loneliness is not so very lonely after a while" (p. 83), THE WOODLANDERS is about doomed love, betrayal, and social restraints, and like Hardy's other work, it succeeds as a satisfying story of a romantic disaster in Hardy's cruel universe. The novel tells the sad tale of a woman, Grace Melbury, forced to choose marriage between two suitors of different social statures, Giles Winterborne, a local woodlander with a gentle, virtuous nature, and Edred Fitzpiers, an ambitious doctor and a scoundrel. Influenced by her well-intentioned though meddling father, Mr. Melbury, who only wants his daughter to "marry well" (p. 89), Grace's decision ultimately leads to disastrous consequences and, in the end, to a lonely woman worshipping at a dead man's grave. Once again, we discover the course of love is never happy in Hardy's universe. Rather gloomy for a Victorian romance novel? Well, yes. But reading Victorian fiction does not get any better than reading Thomas Hardy's extraordinary novels. Returning to Hardy's brooding, melancholy fiction after my first encounter with his novels more than twenty five years ago, I am re-discovering Hardy's brilliant ability to convey familiar, primordial truths through his fiction, making him worth reading again and again. G. Merritt

Published by Thriftbooks.com User , 20 years ago
It's easy to see how Thomas Hardy became a wonderful poet after his long career of writing novels, given the meaty prose and superb scenery he conjured in "The Woodlanders." Tales of matrimonial and unrequited love compete for space amongst the bounty of Hardy's described woods, heaths and vales. "Woodlanders" offers some of the most complex and well-developed characters of Hardy's novelistic pantheon. Yet such stories of amor et fides, honor and self-sacrifice quickly become a backdrop when Hardy reaches for the woods of his mind.

Published by Thriftbooks.com User , 21 years ago
This is one of my favourite Hardy novels. As some others have noted, it's not one of the "big 5" but certainly worth reading. Hardy's descriptions of the woodlands are beautiful, and I found the ending to be one of his most unpredictable. I wouldn't recommend reading it if you are feeling down, as the ending is sooooo wonderfully tragic (hehe), or if you're not a fan of Hardy's prose style, but otherwise it's a wonderful read. Very personal as well. I got the feeling it was written just for me :)

Overlooked classic would be good for a book group

Published by Thriftbooks.com User , 22 years ago
Discovered I had a copy of this in my library from I don't know how long ago, and read it this week. This overlooked Hardy (not one of the hackneyed school list titles) would be a good choice for a book group. Unusual plot covering 3 social classes and their interconnections reminded me of Middlemarch, as well as the theme of rural England being slowly industrialized. I always forget how blatant and "modern" Hardy can be in his discussion of sexuality, as well. Well worth your time if you've forgotten how good Hardy can be.
Copyright © 2020 Thriftbooks.com Terms of Use | Privacy Policy | Do Not Sell My Personal Information | Accessibility Statement
ThriftBooks® and the ThriftBooks® logo are registered trademarks of Thrift Books Global, LLC