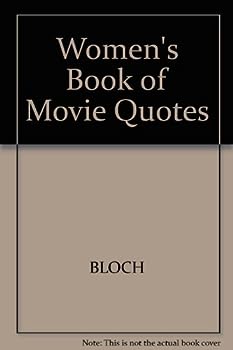 A Book of snappy, interesting quotes by Film Stars This description may be from another edition of this product.

Gems Of the Screen

Published by Thriftbooks.com User , 20 years ago
"Why don't you come up sometime 'n' see me?Who said that,what movie did she say it in and who did she say it to? Well you probably know but if you don't you'll find that and hundreds of other fabulous quotes said by women, to women and about women in the movies in this marvelous little book. Movie fans will love this collection of quips and quotes compiled by Jeff Bloch. You'll find great lines spanning 7 decades of cinema, paying homage to women in film. The book is cleverly divided into sections pertaing to the subject of the quotes. For instances, under the heading of Fashion Statements .."The only thing that seperates us from the animals is our ability to accessorize"-Olympia Dukakis in Steel Magnolia's. Or under the heading of "IT"..."Was that cannon fire. or is my heart pounding?-Ingrid Bergman to Humphrey Bogart in Casablanca. Under Virtuosos..."If I'd been a ranch, they would have named me the Bar Nothing" -Rita Hayworth in Gilda.There are hundreds of theses tasty gems and snappy dialouges. The index is divided into two parts. you can look up by actor/actress or by a particular movie. I recieved this book as a gift about 3 years ago, it still sits on my coffee table and as people pick it up and skim through it I always see a smile of recognition on their faces.This would be a great gift for any film buff.So "Fasten your seatbelts. It's going to be bumpy night."(Bette Davis in All About Eve) LaurieBy the way I know you knew but--the first one, Mae West to Cary Grant in She Done Him Wrong.
Trustpilot
Copyright © 2022 Thriftbooks.com Terms of Use | Privacy Policy | Do Not Sell My Personal Information | Cookie Preferences | Accessibility Statement
ThriftBooks® and the ThriftBooks® logo are registered trademarks of Thrift Books Global, LLC