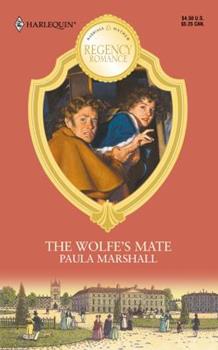 (Book #1 in the Lords and Ladies Series)

The Wolfe's Mate by Paula Marshall released on Feb 22, 2001 is available now for purchase.

Published by Thriftbooks.com User , 20 years ago
The title of this novel, "The Wolfe's Mate," will give you the mistaken impression that this book is all about Miss Susanna Beverly, the heroine of this Paula Marshall regency romance -- not so. This novel is as much about the mysterious hero, Ben Wolfe, as it is about Susanna, and possesses a few elements of the gothic as well as romance.The novel starts with Susanna being jilted in front of the altar by her erstwhile fiance. Not long after that her stepfather informs her that far from being an heiress, she is in fact penniless and that she has being living on his sufferance. And so Susanna, never one to be a burden on her 'loving' family, looks about for employment, and ends up as a companion to Miss Amelia Western, a singularly unpleasant young debutante, and who has just become engaged to Viscount Darlington. And this is what brings Susanna into Ben Wolfe's sphere.Wolfe has just returned from India a very rich man only to find that the unpleasant rumours about his parents are being kept alive by Viscount Darlington's father, Lord Babbacombe. Angered, he decides to take his revenge on Babbacombe by kidnapping Amelia and marrying her himself. Unfortunately, Wolfe's henchman kidnaps the wrong woman: he kidnaps Susanna! By the time Susanna is able to convince both men that they've made a mistake, it is too late. Several hours have passed, and Susanna fears that her already tarnished repuatation will not be able to withstand another scandal. Feeling guilty, Wolfe inveigles his good friend, Madame la Comtesse de Saulx, to help them. And so Susanna finds herself quiting her job with the Westerns and taking up a new post with Madame, where she also finds herself spending more and more time with the mysterious Wolfe. All kinds of rumours about his background and his ruthlessness abound, but Susanna finds that she is strangely attracted to him, and senses that this feeling of attraction is mutual. Wolfe cannot understand his attraction to Susanna, esp as he finds her too forthright and possessing far too a sharp tongue! And yet he finds himself constantly thinking of her and wanting to help her, so much so that he even looks into her affairs in order to investigate more fully her lose of her father's fortune. But will their blossoming relationship be able to survive Babbacombe's spite, the rumours about his parentage or the charge that his father probably killed his mother?This is a really engrossing gothic-romance novel: where is Wolfe's mother? Was she murdered? And if so by whom? Lord Babbacombe charges that Ben is not really the legitimate heir to the Wolfe name and estate. Could this charge be true? Wolfe himself has very few memories of his early years prior to his mother's death. But this novel is also about the romance that blossoms between two independently minded people that have known very little love or cherishing in their lives and who find love and solace in each other. "The Wolfe's Mate" is not only a great read, but would definitely al

Published by Thriftbooks.com User , 20 years ago
Paula Marshall explores some of the seamier parts of the London Social scene. A wicked stepfather and a jilt at the church, starts the tale, a kidnapping that goes wrong even Tozzy a Bermondsey bruiser employed by Jess Fitzroy for his specialised talents makes a cameo appearance. The world of clubs and fencing salons is explored. A Royal Duke has a whim just to help the tale along. Definitely enjoyable and even just possible.From the back of the Harlequin paperback edition:MISTAKEN IDENTITY Unbeknownst to Miss Susanna Beverly, her stepfather had cheated her out of her rightful inheritance. Thus she was forced to become the companion of Miss Amelia Western, who was betrothed to Viscount Darlington. Who would have guessed she'd he mistaken for Amelia and kidnapped by Mr. Ben Wolfe's henchmen!Ben's intentions were honorable. He did at least intend to marry Amelia. But his real aim was revenge upon Darlington's family.Kidnapping the wrong woman upset all his plans, but as Ben got to know the forthright Susanna, he couldn't really admit to being sorry....
Copyright © 2020 Thriftbooks.com Terms of Use | Privacy Policy | Do Not Sell My Personal Information | Accessibility Statement
ThriftBooks® and the ThriftBooks® logo are registered trademarks of Thrift Books Global, LLC