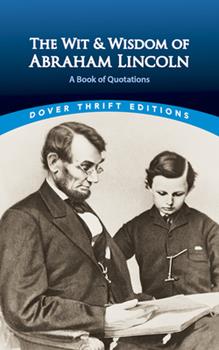 The Wit and Wisdom of Abraham Lincoln: A Book of Quotations

From the most eloquent of American presidents, nearly 400 astute observations on subjects ranging from women to warfare: "Bad promises are better broken than kept"; "Marriage is neither heaven nor hell; it is simply purgatory"; "Whenever I hear anyone arguing for slavery, I feel a strong impulse to see it tried on him personally."

Published by Brandy , 1 year ago
My son read quotes from this book throughout the day. We were astounded by the wisdom of the quotes. A treasure of a book.

Published by Thriftbooks.com User , 13 years ago
Depending on your point of view, the greatest president in the history of the United States was either George Washington or Abraham Lincoln. They were both very humble men and Lincoln may have had no equal in using a small number of words for great power. His Gettysburg Address still remains the most succinct outstanding speech in the history of the nation. This brief book captures the essence of the man, from his humility to his greatness. He was a very witty man and he never let the great responsibility of his office overwhelm that endearing feature of his personality. In only a few small pages, you read volumes about the great man that led the nation from disunity back to a fractured unity. One can only speculate how things would have been different if he would have served a full second term.

Published by Thriftbooks.com User , 13 years ago
Great...received as descrived by Vendor. I still think Abe Lincoln was the best President we ever had..you will be amazed of the way he expressed himself.

Published by Thriftbooks.com User , 14 years ago
This was a Xmas gift to a Abe Lincoln fan. She was absolutely thrilled. Highly Recommend.

Published by Thriftbooks.com User , 18 years ago
Abraham Lincoln showed a talent for sensing the future in the course of economic policy way back in 1863. Lincoln said then: "The money power preys upon the nation in times of peace and conspires against it in times of adversity. It is more despotic than monarchy, more insolent than autocracy, more selfish than bureaucracy.""I see in the near future a crisis approaching that unnerves me and causes me to tremble for the safety of my country. Corporations have been enthroned, an era of corruption in high places will follow, and the money power of the country will endeavor to prolong its reign by working upon the prejudices of the people until the wealth is aggregated in a few hands and the Republic is destroyed," Lincoln said.

Published by Thriftbooks.com User , 22 years ago
Abraham Lincoln - Wisdom and Wit is a great little book from the Peter Pauper Press Pocket Gift Edition, "Wisdom and Wit" series. The book contains Lincoln quotes under the categories of, 'Lincoln, The Man','Lincoln, The Philosopher', 'Lincoln, The Wit', and 'Excerpts from Lincoln's Speeches'. Here's a great quote from 'Lincoln, The Wit': [Lincoln had been called a two-faced man by Douglas] "I leave it to my audience, -- if I had another face to wear, do you think I would wear this one?"

The Wit and Wisdom of Abraham Lincoln: A Book of Quotations Mentions in Our Blog 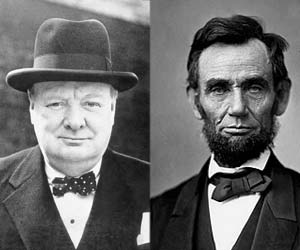 'Clapping back' is the act of (or art of, depending) responding to criticism or any other form of attack (real or perceived) by putting someone in their place. How? With a 'clapback': a quick, targeted, and clever reply that establishes a boundary and shuts the conversation down. (Previously known as a 'burn.') Below are some current and historical examples, plus a few pro tips.