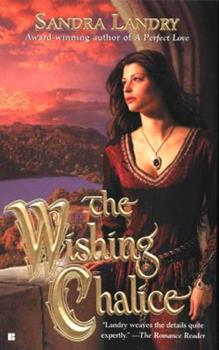 Isabel journeyed to England to escape her failed marriage. But what she found instead was a portal to the past--and possibly the key to her future. Transported back in time, and into the body of a beautiful woman, she cannot deny her growing attraction to her 'husband' Hunter. Nor can they ignore the danger surrounding them, which they must confront--before tragedy strikes.

Published by Thriftbooks.com User , 13 years ago
This is an amazing, beautiful romance. Even if you dislike time travel (and I do), you won't be sorry if you give this a try. Isabel is a smart and determined heroine, and Hunter is a medieval hunk worth going back 700 years for. Their love scenes are sensuous and full of feeling. The story starts with Isabel feeling rootless and lonely, recovering from a divorce and miscarriage. She stumbles across a chalice that shows her a handsome medieval couple deeply in love. Impulsively she wishes that she were that woman, and presto she wakes up in that woman's body in 1315. Confused, she fakes amnesia while searching for the chalice to get back to her own time. Hunter meanwhile has been wishing his new marriage was happy and trying to win his scornful wife's Detra's affection. Faced with her amnesia, he seizes upon the chance to woo his wife anew and finally consummate the marriage. He pretends to Isabel that they're a happy couple. Isabel is attracted to Hunter but resists sex because she doesn't want to sleep with another woman's husband. Moreover she can't find the chalice because Hunter has hidden it, scared that he will lose this newly affectionate wife. I really felt for Hunter. Poor guy was so longing for love (and sex!) from his wife and a happy marriage. Sure he lied to her about them being a happy couple, and later again about the whereabouts of the chalice, but it was understandable and he apologized both times to Isabel (which makes him a bigger hero in my eyes). The writing is excellent and the plot is well done. There's just enough angst as Isabel finds herself in 1315, but this is not overdone. The action kicks up a notch half way through, when Isabel finds out Detra was trying to annul her marriage and carrying on with another guy behind Hunter's back. What will happen to Hunter and Isabel's new relationship when Hunter finds out? Also what will happen when the supposedly magic chalice attracts the covetousness of Hunter's enemy? And can Isabel stay in this time, not knowing if Detra is trying to get back? I really loved this romance. The HEA is very satisfying indeed :-)

Published by Thriftbooks.com User , 17 years ago
This was an excellent book. This is my first book by this author. I will be reading more of her books. I would love to read Detra's story and how she survived in the future in Isabel's body. I hope Sandra Landry is planning to write it. I highly recommend this book to anyone who loves time-travel romances.

Published by Thriftbooks.com User , 18 years ago
Cumbria, England -- Present day; Windermere Castle, Cumbria, England -- 1315Twenty-five year-old Isabel Herbert flees from America to her late grandmother's country home in England to heal from a miscarriage and the subsequent breakup of her marriage. While exploring the countryside, Isabel discovers a jewel-encrusted chalice and is stunned when a mist encloses her in a romantic vision of a man and woman obviously deeply in love. Isabel so wishes she was the recipient of the glowing emotion the man in the vision directs toward the woman Isabel assumes is his wife. His very pregnant wife.As the inexplicable scene fades, Isabel is caught up in a storm and thrust back in time, awakening to the man from the vision -- who claims he is her husband. Isabel is confused and astonished to find herself occupying the body of the woman she also saw in the chalice's vision. She soon realizes her predicament is not due to an overactive imagination, or wishful thinking. She must now play a dangerous game pretending amnesia until she can find the chalice and somehow return to her own time...and body.Born on the wrong side of the blanket, Hunter, formerly of Hawkhaven, now of Windermere, has achieved his life's goal -- a gift of a castle from King Edward, and the woman of his dreams. Detra, however, soon turns into the wife of his nightmares, but Hunter is confident he can turn her affections toward him. After an argument over Hunter's precious chalice, and a fall that injures Detra's head, Hunter suddenly realizes his optomism has come to fruition -- Detra is a changed woman. Claiming she has no memory of him or their marriage, Hunter promptly sets out to seduce his lady wife into falling in love with him. But, what will happen when Detra regains her lost memories?Hunter is one of the most strong, honorable, and sympathetic heroes to ever grace the pages of a romance novel. Isabel is a woman torn between doing what she knows is right or giving in to her own needs and wants. Ms. Landry's character development, from main players to secondary, is flawless.Although the first half of THE WISHING CHALICE is somewhat slow-paced, the originality, premise of the story, and characterization held my attention. Numerous twists and turns then picked up the pace and led to a most satisfying conclusion.I highly recommend THE WISHING CHALICE as a true romantic love story filled with intrigue, betrayal, and the bonding of two people who truly belong together, no matter what the era, or setting. I haven't read Ms. Landry's first novel, A PERFECT LOVE, but am keeping my eyes open for a copy!

Published by Thriftbooks.com User , 18 years ago
Sandra Landry brings a bright voice to Paranormal Romance with "The Wishing Chalice". A combination of three things - a Chalice, a deep wish and a violent thunderstorm - propels Isabel Herbert back in time. Just not in time, but into another's body. She awakes in another's bed, and in the arms of another's husband - Hunter of Windermere Castle. Handsome Hunter could make the memories of the 21st Century fade fast. Only, Hunter is puzzled by his wife's sudden change. She was distant from him, especially in bed. Suddenly, they are heating up the covers. However, Hunter also made a wish on his mother's chalice and now believes this is the reason for the change in his wife. But how long will Hunter be granted the dream of a loving wife?So the chalice, to Isobel, is the means of return to the 21st Century, if she so chooses. But Isobel is seeking it not only for the possible return, but to see into the future, to know if this is where she belongs. Meanwhile Hunter is busy hiding it hoping it will keep his "new" wife as she is.This time travel - by having her arrive in another's body instead of just popping back herself - creates a lot of internal conflicts as well as a long of external problems for Isobel. You even get a "guest appearance" of Robert the Bruce inthe novel. So, it's a story that will keep the readers interested to the very end.

Published by Thriftbooks.com User , 18 years ago
Twenty-five year old Isabel currently lives in England at her late grandmother's cottage as she recovers from a miscarriage and a divorce. England is not a strange land for Isabel as her English mother has lived there following the death of her American husband (Isabel's father) three years ago.Isobel wanders a cemetery filled with the gravestones of her ancestors when the weather turns nasty. She seeks shelter, which Isabel finds in a dilapidated castle. There she notices a beautiful chalice.Not long afterward, Isobel realizes something is not right in her world. She is no longer amidst ruins, but instead is inside a thriving castle. Stranger yet is the body that her mind resides in as she learns she is married to Hunter and living in Windermere Castle as his wife Detra in 1315. As she adapts to a new body and century (a bit too easily) she falls in love with her spouse who wonders if his wife is beginning to love him though he worries about her sanity.Fans of time travel romance will enjoy the fine THE WISHING CHALICE though the story line is somewhat typical of the sub-genre as Isabel mentally adapts too easily for a modern day western woman going back to medieval times. Used to freedom of decision, Isabel would have to deal with loss of independence similar to the women trying to obtain any authority in post Taliban Afghanistan. Still the lead couple is a charming duet as Hunter is bewildered by his spouse's seemingly attitude adjustment and the support cast brings to live the early fourteenth century. The sub-genre audience will appreciate Sandra Landry's quality tale.Harriet Klausner
Trustpilot
Copyright © 2022 Thriftbooks.com Terms of Use | Privacy Policy | Do Not Sell My Personal Information | Accessibility Statement
ThriftBooks® and the ThriftBooks® logo are registered trademarks of Thrift Books Global, LLC