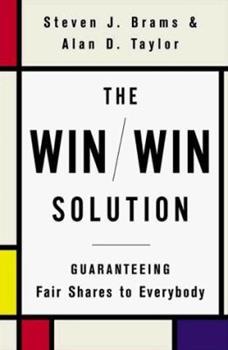 The Win/Win Solution: Guaranteeing Fair Shares to Everyone

by Steven Brams and Alan Taylor

Brams and Taylor bring a patent-pending procedure that assures that both parties of a conflict negotiation can walk away with as much of the "win-win" potential as possible.

Published by Thriftbooks.com User , 21 years ago
In a broad perspective, we see a strong desire in society to understand dispute and simplify the process of closure. In one camp, there have always been those who have worked toward addressing the underlying reality of disputes through logic and wisdom (Solomon for example). In another camp, there have always been those who have arbitrarily simplified dispute resolution leading to forced, bureaucratic solutions, which more often than not led to a more intense conflict.In this reviewer's opinion, it is critical to understand which camp ideas on dealing with disputes belong to. Win-Win does not present a variation of a one-size-fits-all solution or conjure up a quick fix by slight of hand. By recognizing that disputing parties have different needs and priorities, they developed an efficient process that offers the opportunity for all parties to assert, and perhaps win what they think best for themselves. Their idea is nothing less than an addition to the science of fairness in the Western philosophical tradition.Fair division is not a complete solution to every dispute. Solomon might have been confused if confronted by two parents with equal rights, responsibilities, and motivation. In such complex situations as divorce with children, much can be gained however by partially stripping away disputed issues and focusing a new wave of effort on those that remain. Judging from what is presented in Win-Win, I believe the authors would be satisfied with a recommendation that their ideas deserve to be part of the general toolkit for dispute resolution. I would go farther in suggesting it as part of a basic scientific understanding of fairness that every culture needs.Many books attempt to address a broad class of problems and eventually end up in the dusty stack of fads with Hoola Hoops. In Win-Win, Brams and Taylor have presented a valid idea with mathematical precision that adds to our understanding of fairness and is not likely to go out of fashion. But it doesn't stop there. They provide systematic processes for applying the knowledge in real life. I could not possibly imagine the full list of professionals and non-professionals, scientists, politicians, negotiators, and den mothers, who can find value in Win-Win.Roger F. Gay, Project Leader Project for the Improvement of Child Support Litigation Technology http://www.geocities.com/CapitolHill/5910/index.html
Copyright © 2020 Thriftbooks.com Terms of Use | Privacy Policy | Do Not Sell My Personal Information | Accessibility Statement
ThriftBooks® and the ThriftBooks® logo are registered trademarks of Thrift Books Global, LLC