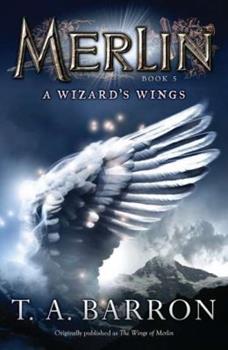 Book 5 in the Merlin Saga by T. A. Barron Winter's longest night is rapidly approaching as Merlin faces the most difficult challenge of his life: to unite all the people of Fincayra against an invasion by the evil Rhita Gawr. But how can one man, in two weeks' time, gather them all--the dwarves, the canyon eagles, the walking trees, the living stones, and more--when none of them will listen? And now comes the mysterious Swordarms, who is hunting down...

Published by Thriftbooks.com User , 18 years ago
T.A. Barron is probably the freshest, most outstanding voice in fantasy and Arthurian literature in... well, a very, very long time. His "Lost Years of Merlin" series is clearly destined to be a modern classic, an exquisitely-written epic saga that reinvents the legendary Merlin. "Wings of Merlin" is no exception -- it's a fitting end to a wonderful five-book trilogy, with its exquisite writing and an epic clash between the legendary wizard and the evil Rhita Gawr. Merlin and his beloved Hallia are enjoying the peace after "Mirror of Merlin," shapeshifting into deer and romping under the amused gaze of Merlin's sister Rhia. But Merlin's powers aren't quite what they could be. And their peace is shattered by a vision of the Dagda, in which he warns Merlin that the battle against Rhita Gawr is about to come to a head. Dagda can't attack Rhita Gawr directly without unbalancing the world, and so it's up to a wizard -- Merlin -- to rally Fincayra's weird and wonderful array of races against Rhita Gawr. Merlin meets up with his old friend Shim the Giant, and receives terrible news: His father, the evil Stangmar, has escaped his prison and is going after Merlin's mother Elen of the Sapphire Eyes. To make things worse, a sinister masked man with swords instead of arms is killing children -- and Merlin's spells don't work against him. Merlin must rally together the giants, the dwarves, the marsh ghouls, and everyone else in Fincayra -- but it may not be enough to defeat Rhita Gawr. Until T.A. Barron's "Merlin" series, there were very few satisfying books about Merlin's early life. Spinning off from "The Merlin Effect," Barron intertwined Celtic legend and his own imagination -- and while there's a bittersweet edge to the series' finale, it's a suitable ending to Merlin's coming-of-age, both as a wizard and as a man. Barron's writing is lush and descriptive, especially when the characters are in natural surroundings. Skies, trees, oceans, sights, sounds, smells, and the magical presence of Fincayra fills the pages. And Barron takes his trilogy forward into Arthurian territory as Merlin brings earthshattering changes to his world -- including a truly memorable, epic climax to the whole series. And Barron proves that he doesn't do plot elements at random: the man with sword-arms has a specific reason to be mad at Merlin, and a shocking double identity earlier in the series. The battle against Rhita Gawr somehow elevates itself above the usual fantasy cliches of the good guys versus the evil Dark Lord, especially with the added mystical element. Merlin has changed a lot from the insecure, slightly whiny boy of the first book, who didn't want magic and barely knew how to use it. But Barron doesn't make him all-powerful; he still has doubts, worries, and there are things he hasn't figured out how to do. Rhia is funny and mischievous (and so is the little creature in her pocket). Returning characters like Shim, Elen, Cairpre (who doesn't love Cairpre?) an

Published by Thriftbooks.com User , 21 years ago
All good things must come to an end, and no good thing could come to a better one. The last chapter in the Lost Years of Merlin saga is the best. It is full of everything that makes Barron's books so wonderful- excitement, suspense, surprises, and unexpected twists. It is a tale of love and friendship, of hope and despair, of defeat and triumph, of revenge and forgiveness. Here is a wonderful, heartbreaking story, a story to make you laugh and cry, a jewel of a story to treasure forever, to read again and again. I would recommend this book, this entire series to anyone who wishes for a beautiful, true story. For while the story of Merlin's youth is a fairy tale, in it's fantasy it is truer than the facts in any book- to the spirit at least. I would encourage children to loan it to their parents, and parents to read it with their children. Reading this book is a truly marvelous experience.

Published by Thriftbooks.com User , 21 years ago
TA Barron does it again! Just when I thought everything was so wonderful in Fincarya - book #5 grabbed me, had me reading, not able to put it down just until I found out what was happening there. I was going to take my time and savor this book BUT, I read straight through it hardly able to keep myself from jumping ahead to find out how it was going to end! It was great to see some of my favorite and least favorite characters from the prior books. This book was great - a must read - especially if you have already read the other Lost Years of Merlin books. It was great reading these and discussing them with my kids and seeing them excited about reading. Magical, emotional, thought provoking and even possibly heart wrenching......read it and experience this book!

All Good Things Must Come to an End

Published by Thriftbooks.com User , 21 years ago
T.A. Barron's final book in the Lost Years series is indeed one of his best. Barron manages to tie up all the loose ends for readers by bringing back the important characters from the past, including a surprise visit from someone you'd least expect.What makes the ending so satisfying for those diehard fans of Arthurian legend is the way the book transitions into the stories that we are all familiar with. It is well done and seamless in its connection. A word of warning: Though none of this series is for young readers, the final book has Merlin a bit more grown up than in the past. He has a serious relationship with Halia that is the center of much of the book, and some close and important characters do not survive. Still, for those who have followed Merlin through his lost years, the book is a must read. Enjoy!

Published by Thriftbooks.com User , 21 years ago
T.A. Barron first brought this new and original concept of Merlin to life in THE LOST YEARS OF MERLIN. That book was a wonderful read that brought new views and old themes into a retelling of the timeless legend. The books that followed definitely kept the reader involved, although the plots themselves became pointless at times, and some of the minor characters were just stupid. Still, the final book in this epic is written with personality and tells a very worthwhile story with a minimum of the meaningless tangents that were seen in some of the other books. I do not mean to criticize this series too much. I enjoyed it very much and I think that Mr. Barron created an excellent conclusion. This book certainly matched the first one in the level of excitement that passes through our young wizard into every reader's imagination. This is definitely worthwhile, especially if you have read the previous books.p.s. The similarities to the Star Wars films that were found in the first book are definitely not present in the final book.
Copyright © 2020 Thriftbooks.com Terms of Use | Privacy Policy | Do Not Sell My Personal Information | Accessibility Statement
ThriftBooks® and the ThriftBooks® logo are registered trademarks of Thrift Books Global, LLC