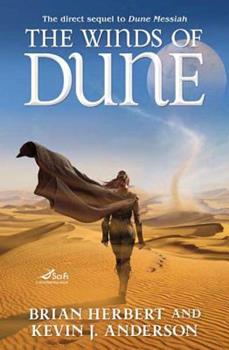 The Winds of Dune

With their usual skill, Brian Herbert and Kevin Anderson have taken ideas left behind by Frank Herbert and filled them with living characters and a true sense of wonder. Where Paul of Dune picked up the saga directly after the events of Dune , The Winds of Dune begins after the events of Dune Messiah . Paul has walked off into the sand, blind, and is presumed dead. Jessica and Gurney are on Caladan; Alia is trying to hold the Imperial government together...

The Winds of Dune

Published by Thriftbooks.com User , 11 years ago
Bought it for my father who has been looking forward to this title. Very pleased with the condition and arrival of the book. Thank you!

the wind of dune

Published by Thriftbooks.com User , 11 years ago
was waiting for this book for a time thank you brian Herbert for the wonderful book

What happened after the original Dune story

Published by Thriftbooks.com User , 12 years ago
I have read every Dune novel as they were released from the very beginning of the series. I always wondered after the end of Dune and the second book - what happened? How did this get all messed up? I think this book helps clear this up somewhat at least. I don't think the tale is told yet. I thought Brian Hebert's book is a very good read, especially for die-hard Dune fans. His writing is much easier to follow than his Dad's, albiet maybe less "literary", whatever that means. I would like someone to write a total timeline of the Dune stories, before, during and after the Paulian era of Dune. It would be interesting to see what happens to us Earthlings.

more invaluable pieces of the saga.

Published by Thriftbooks.com User , 12 years ago
Ever since reading the original Dune back in highschool I have had a ravenous appetite for any and all things Dune. It was just at that time that the first Dune Prequels were coming out but I dutifully read through all of Frank Herbert's Originals before delving into Mr Anderson and Mr Herberts novels. While the style of these novels is decidedly different than the originals that should not make the diehard Frank Herbert fan stay away from them. there more approachable style shed light on some concepts even a major Dune nerd like myself had found obscure in the original novels. and finally once armed with the information of the first 6 prequel novels i went back to the originals to read through completely and enjoy the grand finale that was finally written. it is on these second readings that one really grasps how great the prequels were to fit in so well with the originals and they both work to elevate the others. This new book is no different. filling in a very interesting time after Paul's walk into the dessert we get to witness how Alia grabbed the reigns of the imperium and beagn her troubled rule that we will see in Children of Dune. All the characters we know and love are given much more depth than was ever possible before. and several new interesting characters are introduced to further the tale. The main character who has really benefited from these novels is the count Fenring a character given a very shady short description in the original novels, here he leaps of the page as a fully realized character, who holds great power despite his lack of prominence. Using a great flashback sequence the novel manages to show both glimpses of pauls childhood and the universe after his disapearance and seeing the vast changes wrought by him are even more breathtaking with this format. If there were any complaints to be leveled at this and its most recent predecessor it would likely be that while the events easily fit into the overall Dune narrative created by Frank Herbert there are less concrete links and i imagine reading them all in chronilogical sequence might cause some troubles by characters who show up only in these prequels and then would disapear for the Frank Herbert book in between and then show up again. for this reason i would still suggest to any readers new to the Dune series to at least read Frank Herberts original three Dune novels before plunging into these prequels. but once you have you will not regret it.

The Winds of Dune: Jessica's Time

Published by Thriftbooks.com User , 12 years ago
THE WINDS OF DUNE: Jessica's Time In THE WINDS OF DUNE by Brian Herbert and Kevin J. Anderson, the jihad of PAUL OF DUNE and DUNE MESSIAH gives way to counterrevolution and growing complications among the principal characters, especially the women. After Paul is presumed dead, Alia acts as Regent for the infants Leto and Ghanima, and Irulan waits in prison for her destined role. Bronso of Ix attempts to topple the messianic image of Paul, but overshadowing that image is the character of Jessica. The authors face the inevitable dilemma of building suspense in a novel which is both prequel and sequel, yet they manage it with practiced aplomb. The greater challenge is, however, living up to stylistic comparisons with Frank Herbert while fashioning an original contribution to the Dune canon. The master's "vertical layers," "Victorian poses," and epic dialogue inform characters. His free indirect narration and compressed or "coital" structure continue. Even a cursory study of the first page of THE WINDS OF DUNE reveals character, setting, mood and figurative language worthy of the original DUNE. As plot unfolds, the devoted reader knows where Paul is. He is in the desert. The dramatic irony experienced during his funeral could not have been had in the Theatre of Dionysus, yet the invisible hero has attained a stature reminiscent of Oedipus, wandering toward Colonus. Soon it becomes apparent that, wherever we find Paul, he will be upstaged by Jessica, and the reader must discover how others will contribute to some change in her, hinted in the winds. Jessica stands at the hub. She must be connected with Alia, Irulan, Leto, Ghanima, Gurney, Bronso and others in ways not yet revealed. Long flashbacks describe chapters which are structurally identical to remaining chapters. They are campfire accounts told by Jessica. A more daring stylist might have shifted to first person narration, but within the larger scheme these flashbacks work. In particular, the boyhood stories of Paul and Bronso evoke our own childhood dreams of circuses as well as Dorothy's journey to Oz, deftly balancing the familiar with the unfamiliar. And the show goes on. Ecological, political and religious parallels notwithstanding, Frank Herbert's great literary contribution begins with the idea of the hero. From the Houses of Atreus and Oedipus, to the modern Byronic and code heroes, this character as theme has pervaded Western literature. Through Paul we are warned about the disastrous consequences of our devotion: "May god save us from a messiah of our own making." Our hero becomes the father; the father becomes the son. But what of the mother? At the conclusion of DUNE Jessica says to Chani, "We who carry the name of concubine¯history will call us wives." At the conclusion of The WINDS OF DUNE Jessica might have hoped that history would still call her Mother. J. Walker Williams
Copyright © 2020 Thriftbooks.com Terms of Use | Privacy Policy | Do Not Sell My Personal Information | Accessibility Statement
ThriftBooks® and the ThriftBooks® logo are registered trademarks of Thrift Books Global, LLC