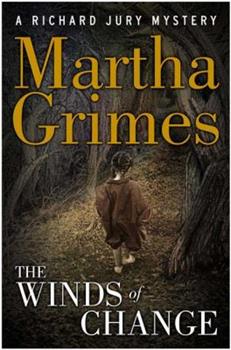 The Winds Of Change: A Richard Jury Mystery

(Book #19 in the Richard Jury Series)

As he leans over the body of an unidentified five-year-old girl shot in the back on a shabby London street, Superintendent Richard Jury knows he?ll be facing one of the saddest investigations of his life. His colleague DI Johnny Blakeley, head of the pedophile unit of NSY, thinks he knows where this child came from?an iniquitous house on that same street, owned by well-known financier Viktor Baumann and fronted by a woman named Murchison. Blakeley...

The Winds Of Change: A Richard Jury Mystery

Published by Thriftbooks.com User , 16 years ago
I enjoy all the "Richard Jury Mystery" books by Martha Grimes. This book is good by itself, but I recommend starting with the first book in the series "The Man With A Load Of Mischief" and reading the stories in order. It's not necessary to follow the plot, but it adds to your enjoyment because you get that many more chances to enjoy a great book, but also because you see the characters grow and development and enjoy the interaction between the characters so much more if you have a history there. Take my advice, read all the "Richard Jury/Melrose Plant" books. The characters become like old friends you can catch up with everytime a new book is published. Keep up the good work Martha!

One of the best IMHO

Published by Thriftbooks.com User , 16 years ago
For a while I removed myself from reading Martha Grimes. It seemed she had tired of Richard Jury and Melrose Plant. But then I picked her up again and did a re-read of an old novel. It pushed me back into the bookstore to buy "The Winds of Change" in hardback even!!!! (on my sister's recommendation--it was worth the cover price!) Jury isn't his old self, he's more than his old self. He and Plant have developed, there's more depth there and Jury is even more vulnerable and more 'human' than before. Go back and re-read "The Man With a Load of Mischief" then compare these two novels. The difference is amazing. Grimes has made Jury a little sadder, a bit edgier, something a man his age would come into, we would assume in police work. I hope she hasn't tired of these novels. With this last one, it's like a breath of fresh air. And definitely not a 'chore' by any stretch to get through. Spend the money.

Published by Thriftbooks.com User , 16 years ago
Thank you Mrs. Grimes for letting us have a lighter ending than most of the stories in this series.

A literary mystery that will delight lovers of the genre

Published by Thriftbooks.com User , 17 years ago
Once again "the game's afoot" in the latest Martha Grimes novel, THE WINDS OF CHANGE. The regulars who comprise her ensemble cast are on hand as Richard Jury, Melrose Plant and Wiggins tackle multiple cases --- the tragedy of a little girl, shot in the head on a North London street; the disappearance of another child three years before in Cornwall; the murder of a woman who was shot with a .22-caliber gun, her body found on the grounds of an estate called "Angel Gate"; and the ongoing investigation of a pedophilia ring, thought to be working out of a house near where the dead little girl was found. Would any of these cases play a role in the other cases at hand, or are they merely coincidences? Jury, like most lawmen, doesn't believe in coincidences. As if this was not enough to keep Jury and company busy, his only living blood relative, a cousin who lived in Newcastle, dies suddenly. While the two were not really "kissin' cousins," her death has a profound impact on him: "Death had a way of kicking out the props, of smashing one's carefully constructed defenses. It was fine for him to say he saw his cousin seldom and that he wasn't close to her and that, actually, they had never liked each other. That could work in life; it didn't work in death." The themes of memory and identity are at the core of THE WINDS OF CHANGE. Why is it that too often things are not what they seem, and what we think we remember today has a slightly different caste tomorrow? Jury wrestles with these notions while his old friend, the crusty Commander Macalvie, who brings along the recently promoted DS Cody Platt to help with the investigations, joins him and Melrose Plant. They take over "The Winds of Change ... a pub located in the village of South Petherwin." The questions about memories and identities are not far from Jury's consciousness as he listens to the outline of the now three-year-old disappearance of Flora Baumann and is also filled in on the death of the unknown woman whose body was found on Flora's stepfather's property. Martha Grimes is a master of her genre and a writer of extraordinary power and imagination. In this, her nineteenth Richard Jury novel, she has produced a literary mystery that will delight lovers of the genre. Readers who enjoy a good tease about where a quote comes from, or what book a character has peeked out of, or allusions to writers and works, will find themselves immersed in literary trivia that will add new depth to the armchair sleuth's enjoyment. Quotes from Shakespeare and Robert Frost to Emily Dickinson's line, "Split the lark and you'll find the music" and Philip Larkin's words, "The trees are coming into leaf/ Like something almost being said", pepper the plot. Grimes repeatedly refers to Henry James's characters, books and style. She inserts and insinuates the names of characters, and shadows well-known plots from other classic writers. Even Brown's Hotel in London and Agatha Christie get the nod in this kaleidoscopic dior

Ah, Dear Martha Grimes, You Have Made My Week!

Published by Thriftbooks.com User , 17 years ago
I have been missing Jury, but especially Melrose, Agatha, and Trueblood, for way too long. Here they are back again, and the trademark Grimes cameos are in place: the various on-the-spot children and their never-fail reactions to either Jury or Melrose; Agatha, that prize ass we all know somehow; Marshall with his sardonic whimsy; the melancholy, the humor, the irony... the list goes on. The crime seems darker this time; it *is* darker, no doubt about it, and one wonders, as Jury has got to be advancing in years at this point, if he will go out not in a blaze, but in a dark vacuum of some sort... but I hope he goes on forever. Impossible? Nah. "Impossible" is a nobleman who relinquishes his title, yet puts up with a horrid aunt-by-marriage, or a village of quaint characters every one, or a "pleecemun" with the heart of a Jury, or a sidekick with the wisdom of a Wiggins. They must go on forever. I love your other books, Ms. Grimes, but your finest moments are always quite near to Ardry End.
Copyright © 2020 Thriftbooks.com Terms of Use | Privacy Policy | Do Not Sell My Personal Information | Accessibility Statement
ThriftBooks® and the ThriftBooks® logo are registered trademarks of Thrift Books Global, LLC